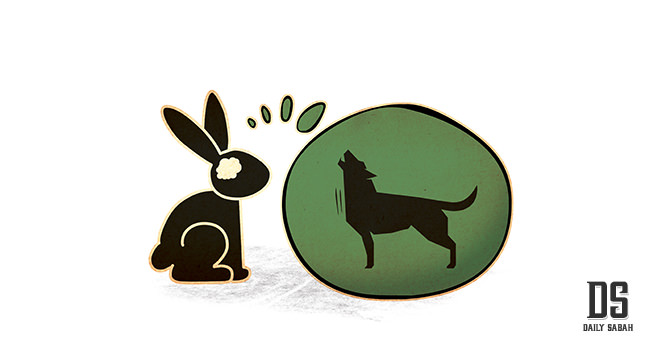 By declaring that Turkey had violated the rights of Can Dündar and Erdem Gül, the Constitutional Court overstepped its mandate and engaged in political activism

Once upon a time, a rabbit decided to write a doctoral dissertation. He wanted to be a more prominent figure in the animal kingdom. For some reason, though, he was unable to pick an interesting subject. One day, the rabbit stumbled upon a jackal who recommended that he first find an academic advisor. "Your academic advisor should tell you what you should work on," the jackal said.

Agreeing with the jackal, the eager rabbit asked around and finally found himself an academic advisor. The advisor, as the jackal had suggested, was kind enough to pick a subject for him. The rabbit rushed to a nearby flea market to purchase a second-hand typewriter and started working on his dissertation.

A wolf, intrigued by the rabbit's commitment, asked him what he was doing. "I am trying to prove that rabbits are much more powerful than wolves," the rabbit answered. When the wolf started mocking him, he offered to defend his argument. "Let us go behind the bush together and I will show you," the rabbit said. The wolf agreed.

Earlier this week, the Constitutional Court ruled that the authorities had violated Can Dündar and Erdem Gül's freedom of expression, press freedoms and personal rights. Upon being petitioned by the two journalists, who are charged with espionage and terror propaganda, the court reached a decision within days. The Constitutional Court, which had reached a verdict about a Twitter ban within 10 days, took a little longer this time. But the justices got to Dündar and Gül's application much quicker than everybody else's. Keeping in mind that a court decision on a petition by President Recep Tayyip Erdoğan, who alleges that his rights were violated, has been pending for over two years, the Constitutional Court, no doubt, worked with extreme efficiency. At this rate, it will not take long for the justices to publish their final verdict. After all, they do not need to visit a flea market for supplies.

Although Dündar and Gül are charged with "obtaining and publishing confidential documents pertaining to state security for the purpose of political and military espionage," the Constitutional Court referred to the freedoms of expression and the press in its verdict. In other words, the court issued a political statement behind the smokescreen of generic and normative phrases. In doing so, the justices threw their weight behind a political campaign by opposition parties and voiced support for radical groups that have been seeking to mobilize the masses since the Gezi Park protests.

Dündar and Gül's allegations about the National Intelligence Agency (MİT) posed a clear and imminent threat to Turkey's national security. By publishing unverified claims, they sought to undermine the government's credibility in the international arena. At this point, people who share Dündar and Gül's convictions are willing to work with the PKK leadership, the Gülen Movement, Bashar Assad's regime in Syria, Iran and Russia to challenge Turkey's democratically elected government.

One wonders whether the Constitutional Court will reach similar verdicts if and when self-proclaimed journalists actively work with PKK terrorists or the Gülen Movement. Once the justices are done whitewashing them, somebody should tell Edward Snowden to petition the court. They will not even need to go to a flea market.
Last Update: Mar 02, 2016 1:32 am
RELATED TOPICS