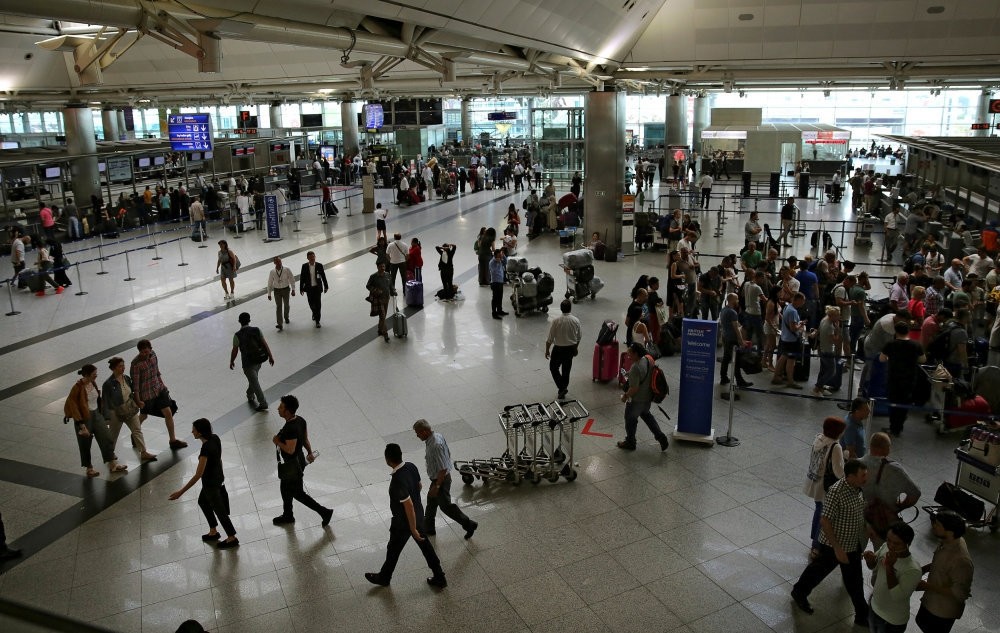 A camera image of the departure terminal at Istanbul's International Atatu00fcrk Airport on June 29, the day after the deadly terrorist attack.
by Fahrettin Altun Jul 01, 2016 12:00 am

While struggling to stand against the deadly threat of DAESH terrorism, Turkey is isolated in its fight by some that still believe Turkey supports DAESH

Turkey is a country that has endured numerous terrorist attacks and has lost countless citizens to terrorism. However, the wave of terrorism that Turkey is facing today is at an incomparable level to terrorist attacks of the past. When we look back from today, we can say that the June 7, 2015 election was a milestone in terms of the intensifying waves of terrorism. A month before June 7, DAESH, and then the PKK came into play, and both began terrorist attacks. The PKK announced that it had begun a "revolutionary people's war" against the Turkish state and initiated extensive terrorist activities. In the new period, the PKK attempted to occupy cities in the southeast and caused the loss of lives of hundreds of civilians and security personnel. Calls of civil war and self-governance began to accompany the PKK's occupation of cities. However, the government violently intervened against the PKK's plan and brought the PKK heavy losses.

Using this as an opportunity, DAESH became the main actor. DAESH also came into play and carried out many bloody terrorist attacks. When examined, it is possible to see a certain sequence to DAESH violence in Turkey. DAESH first began targeting people it thought were PKK sympathizers, whom they were fighting against in Syria. Later, it turned to tourists in Turkey and targeted them in its attacks. DAESH then attacked Turkey's security forces. The next level was to target Turkey's civilian population. The latest DAESH terrorist attack at Istanbul's Atatürk International Airport demonstrates that it regards the Turkish government and people in their entirety as enemies.

Turkey took many steps in its struggle against DAESH. These steps were, in sum:

Border security precautions taken at the Syrian and Iraqi borders

Struggling over the Internet against FTFs' encouragement for terrorism

The PKK's propaganda machine attempted to spread the lie that Turkey has long been supporting DAESH. It tried to bring together its sympathizers over this lie and form a bond of solidarity. More importantly, by insidiously taking refuge in the "struggle against DAESH," the PKK tried to defame Turkey, which was struggling against it by saying that Turkey supports DAESH. Then the PKK marketed itself as a secular organization fighting against DAESH.

Unfortunately, this discourse found a substantial response in the West. Lies, such as Turkey keeps its borders open on purpose and that it supports DAESH in Syria, began to be spread. Turkey's 900-kilometer border of extreme geographic difficulties with Syria began to be treated like Berlin's Check Point Charlie during the Cold War. While fighting against DAESH and the PKK, which Ankara thinks are in cahoots, Turkey also had to struggle with this lie. The Western world left Turkey and Turkey's population to face terrorism alone. What is more, it carried out policies that would weaken Turkey's fight against terrorism.

The European Union required that Turkey soften its anti-terrorism law in order to be granted the visa-free travel it promised as per the readmission agreement on refugees. This opened up space for the PKK to act. The U.S. also enlarged the PKK's area of activity under the name of fighting against DAESH in Syria. Using this area, the PKK intensified its actions in Turkey. Moreover, the U.S. contributed to legitimizing the PKK in the international domain. Just like the EU, the U.S. did not act as a friend and ally should in Turkey's fight against terrorism.Will those who regenerated the PKK propaganda of Turkey enabling DAESH still continue with this lie in the face of DAESH's latest attack, or will they be able to comprehend that this attack on one of the world's biggest airports is a threat not just to Turkey, but to the world and world peace, and act responsibly? I hope this latest, deplorable, terrorist attack will allow an end to initiatives to isolate Turkey in its struggle against terrorism.
RELATED TOPICS