We were all in Yenikapı on Sunday 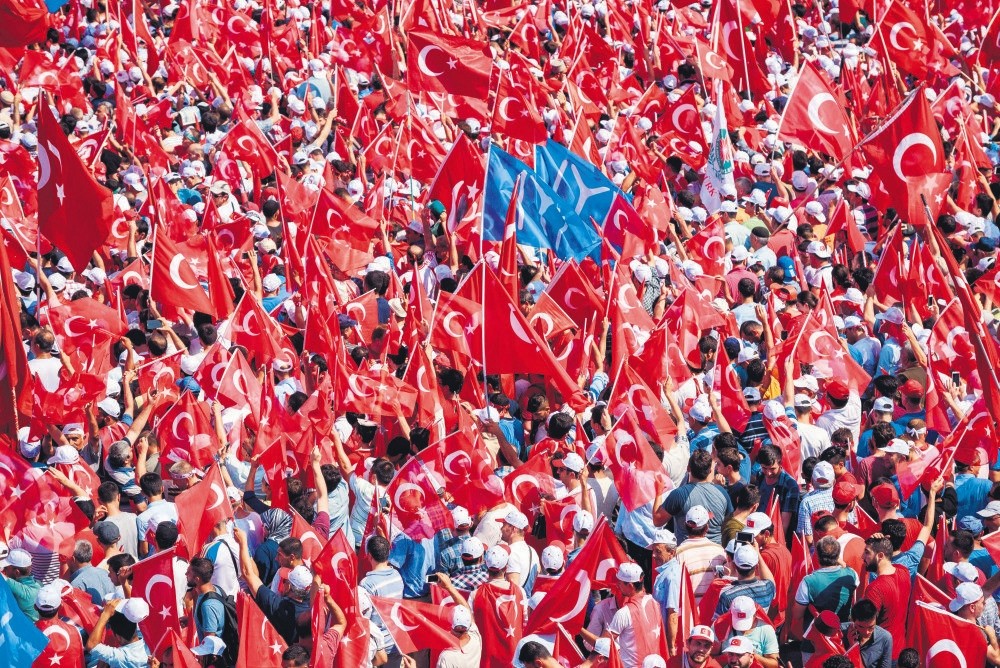 The actual owners of Turkey showed the facts of the country to all, friend and foe. They demonstrated that they persist and stand up for their homeland. They declared that they keep on with their democracy watch.

The nation was in Yenikapı on Sunday.

All of Turkey poured into public squares during the Democracy and Martyrs Rally at Yenikapı Square.

July 15 marked the beginning of a new era in Turkey.

Fortunately, the plots, made-up segregations and fake tensions to divide the nation did not yield any result. Our nation foresaw every attempt.

The nation was not provoked and did not allow any fight between brothers. They never approved any fake tensions or conflicts in politics.

When confronted with an outside threat, the nation always sided with unity, peace and brotherhood.

The people regarded the July 15 coup attempt and Gülenist Terror Organization's (FETÖ) assaults as an "invasion attempt of foreign forces."

With this in mind, they marched toward tanks and made the country their homeland again.

They demonstrated that this land cannot be designed by pro-Western policies, terrorism, Jacobin behavior and underground illegal organizations.

They had their name written in gold letters in the world's history of democracy.

Around 90 percent of Turkish people clearly identify their foes.

They appreciate President Recep Tayyip Erdoğan's leadership and struggle throughout the process.

They trust in Prime Minister Binali Yıldırım and the government.

They think the opposition parties acted responsibly to a great extent.

In my opinion, Nationalist Movement Party (MHP) Chairman Devlet Bahçeli had a great role in forming this perception. The surveys clearly show that political unity and solidarity was formed regardless of party differences.

From now on, the main aim must be to sustain this atmosphere. For this, the nation's message must be interpreted in the right way.

The Yenikapı rally was a significant starting point in this respect. The participation of Republican People's Party (CHP) Chairman Kemal Kılıçdaroğlu was also quite important.

Turkish politics is now confronted with a genuine demand coming from the base of society.

We are mentioning a dynamic society gathered around a common ideal and against a common enemy.

This is a conscious nation that is able to become an active agent.

From now on, assuming that the nation does not have memory or competence would only be absurd.

Kerim Balcı, a Gülenist journalist, said the following during the coup attempt:

"Our people do not know anything about standing against the G3 bullet or lying on the ground. They did paid military service." By saying so, he tried to contribute to the coup attempt's success.

Now the "parallel structure" has seen what the nation accomplished. Let alone G3 bullets, they stood up against tanks. When necessary, they lied on the ground and took shelter. But they did not fall down. They did not leave the country to weasels, and will not.
RELATED TOPICS