How to read Turkish-Russian relations? 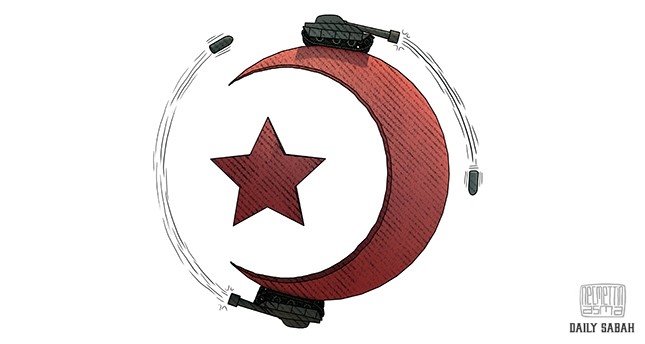 Illustration by Necmettin Asma - twitter.com/necmettinasma
by Fahrettin Altun
Aug 12, 2016 12:00 am

This week, President Recep Tayyip Erdoğan's visit to Russia was one of the most important topics on the international agenda. Certainly, there is nothing to be surprised with in this regard. First and foremost, it was the first meeting between Erdoğan and Russian President Vladimir Putin after Turkey shot down a Russian warplane, which blew apart the countries' relations. Second, it was Erdoğan's first overseas visit after the failed July 15 coup attempt. Both Erdoğan and Foreign Minister Mevlüt Çavuşoğlu appreciated that Russia was the first state to condemn the coup attempt without any condition. Third, the constant and harsh criticism from the West - especially the U.S. - of Turkey's "ambivalent and irresponsible attitude" during the coup attempt, amplified the value of this meeting. Some have asserted that Turkey could possibly shift from the Western axis toward Russia, moving away from NATO and evolving a Eurasianist line. Others have contended that this visit was a strong message from Turkey to the U.S.

Two main developments impacted the psychological atmosphere of Erdoğan and Putin's meeting. Firstly, it was revealed that behind the downing of the Russian jet was the Gülenist Terror Cult (FETÖ), against which Turkey is combating. The second development is related to the open and unconditional support Russia provided for Turkey's legitimate government during the July 15 coup attempt. Both of these developments enabled the realization of this meeting in a warmer atmosphere. The Western world is far from understanding the rational ground of Turkish-Russian relations. Turkey changing its bloc was one of the most common assessments. According to another common belief, Turkey's rage against the Western world is effective in this rapprochement. And according to another common belief, Erdoğan's personal caprices are effective in this rapprochement, too. Moreover, there are many others who have argued that Erdoğan prefers rapprochement with authoritarian leaders like Putin. Those who live in Turkey and try to read and understand developments in Turkey and around the world are tired of the growing number of presumptuous comments from the West. These comments are far from understanding Turkey, its reality and needs and try to dictate Turkey's position, and border on the obscene. They are not fed with the facts, but with perceptions. Instead of commenting, they judge. Are we living in a Cold War period with a bipolar system and not aware of it? Is Turkey an American satellite and Erdoğan does not know this? Does Turkey coming closer with Russia and trying to improve relations make Turkey a part of the former Soviet bloc? Does such a bloc still exist?

Turkish-Russian relation can be simply defined as the normalization of relations and rapprochement between two states. Normalization is to bring relation back to the state they were before Nov. 25, 2015, and rapprochement will create a new area of opportunity. This normalization and rapprochement is not only at Ankara's request, but Moscow's as well. Both countries, as important actors in the region, were seriously damaged after Nov. 25. Eliminating the tension between Turkey and Russia has made relations resistant to manipulation and intervention. The possible problems arising from Russia were eliminated and Turkey was protected from manipulation from Western countries trying to open the field by taking this tension between Russia as an opportunity.

In the course of the July 15 coup attempt and its aftermath, due to the boorish and anti-democratic attitudes of the West toward Turkey, the depths Western manipulations could reach became obvious. Despite the struggles of Western essentialist and radical actors, Turkey does not intend to break away from the West. Nevertheless, it does not want to create a dependent relationship as in the past. Turkey intends to be a free and independent country based on its interests. Moreover, it tries to conduct its policies on a legal basis and in accordance with international conventions and aims to contribute to the solution of regional and global problems. Russia is an important actor in this perspective and Turkey is trying to improve its relations with it. At this point, one of the most frequently asked questions is related to the divergences between Turkey and Russia regarding the Syrian civil war. There is no doubt that this is a very complicated issue. However, Turkey, as a neighbor of Syria, has already seen that the West, and especially the U.S., will not provide any support. Syria's territorial integrity is crucial for Turkey. Moreover, Russia does not see the PKK-linked Democratic Union Party's (PYD) armed People's Protection Units (YPG) as an indispensable partner in the fight against DAESH as the U.S. does. The meaning of this will be better understood in the following days.