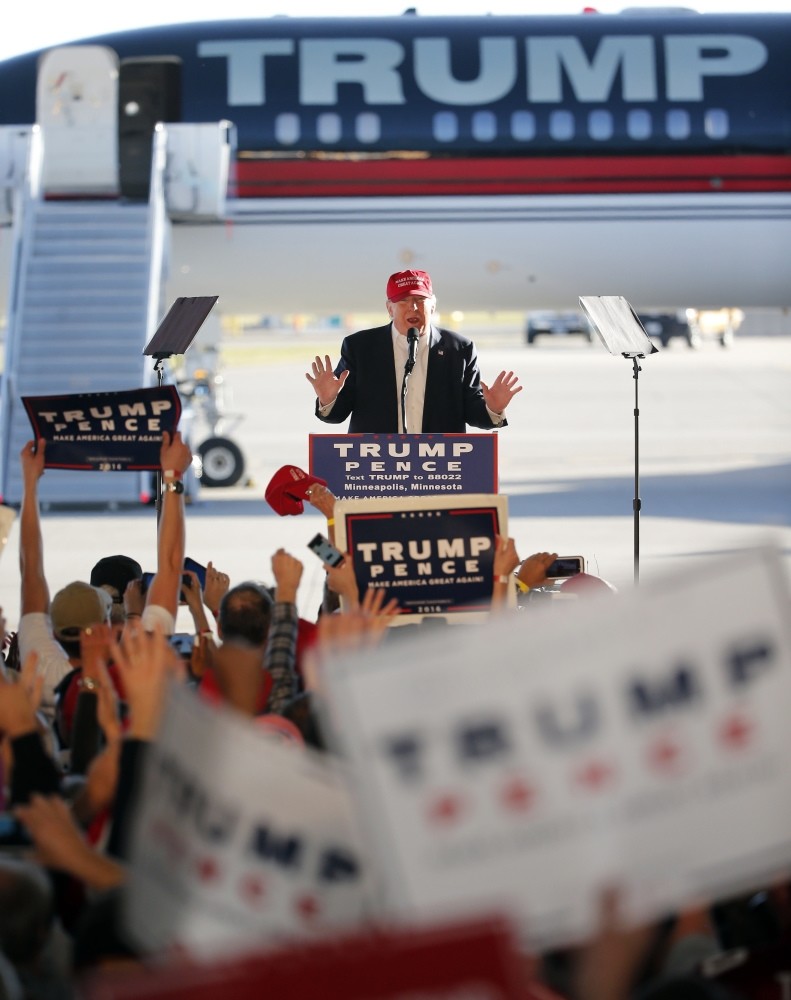 The Turkish public hopes President-elect Donald Trump, unlike Obama, will be more accommodating of Turkey's interests.
by Fahrettin Altun Nov 11, 2016 12:00 am

Liberals, Clinton supporters, 'educated voters' think they have monopoly on the truth and that those who voted for Trump are plain ignorant

The much-anticipated day arrived and the U.S. presidential election is finally over. But the expected did not happen. Hillary Clinton was not elected U.S. president. The U.S.'s 45th president turned out to be Donald Trump.

Survey firms, media establishments, think tanks, all of them stated that Clinton would be elected president with great gusto and without doubt. They did not speak as if they were making a prediction; they prophesized. They presented what they wanted to happen as the absolute truth. However, their prophecy came to naught. Alongside Hillary Clinton, the soldiers of the American information industry also suffered a loss.

The trauma that European liberals experienced in the face of right-wing leaders is being experienced by American liberals who have lost to Trump. And they are embarking on an effort to find excuses for the loss they have suffered and to explain why society "diverged onto this wrong path." It is impossible to say that the reactions they have displayed in this period are "politically correct," "liberal" and "in tune with democratic values."

As someone looking from Turkey, observing these reactions is quite interesting. Since the 1950s, Turkey's society carried "culturally conservative, economically liberal" right-of-center parties into power rather than the party given to them by the Kemalist state elites. Each time, the Kemalist state elites, with the backing of the media, opted to denigrate society and the voter rather than focusing on their own failures. After every election, there were broadcasts belittling the people and stating a need for the bureaucratic oligarchy to step in. As it slowly became obvious that Trump would be winning in the U.S., I essentially experienced a sense of déjà vu after seeing the broadcasts by Clinton supporters in conventional and social media.

A liberal academic tweeted, "I don't recognize my own country." Another shared the message, "Non-college educated voters in the U.S. are making Vladimir Putin very happy. And the KKK, too," on their social media page. The people they disdain by calling "non-educated voters" are those with the competence to elect the U.S. president. How well they have absorbed the democratic culture, don't you think?

Another liberal think tanker asks, "Why can't we have a military coup in the U.S.?" And then adds, "We badly need one today." Isn't this interesting? Conducting politics by counting their own political position as absolute, not the will of the people or the decision of the voters. Moving with the conception that they alone have monopoly on truth. The acceptance of such approaches in a democratic political structure is unacceptable. At the end of the day, such an approach only leads to totalitarianism.

The Turkish public was keenly interested in the U.S. election results, much like the rest of the world. The reason behind this global interest in the U.S. elections is related to the influential power of U.S. foreign policy. But Turkey had an additional reason for being interested in the U.S. elections. Because the people of Turkey consider the present U.S. administration to be behind the 15 July coup attempt, they are of the opinion that the U.S.'s domestic politics will have a direct impact on Turkey. Alongside this, a large part of the public in Turkey is of the opinion that the Obama administration - during the last period - has been aiding the PKK and Gülenist Terror Group (FETÖ) and is asking the new administration in the U.S. to cut off the aid. And yes, a large part of Turkey's public thinks that this aid would have continued if Clinton had been elected, and that because Donald Trump speaks from within a pragmatic political frame, they think he will discontinue the bad politics.

In the last three years, anti-Americanism has been on the rise in Turkey. Especially after July 15, thissentiment has peaked among Turkey's public. The perceived support given by the Obama administration to the PKK and FETÖ – which was behind the July 15 coup attempt – have simply caused this feeling to heighten. As I mentioned before in various ways, the anti-Americanism in Turkey is not something cultural or ideological, it is an opposition that rises out of the wrongs of American politics. If the Trump administration sees this and follows politics appropriate to it, Turkey-U.S. relations can embark on a period of normalization and convalescence.
Last Update: Nov 11, 2016 1:41 am
RELATED TOPICS