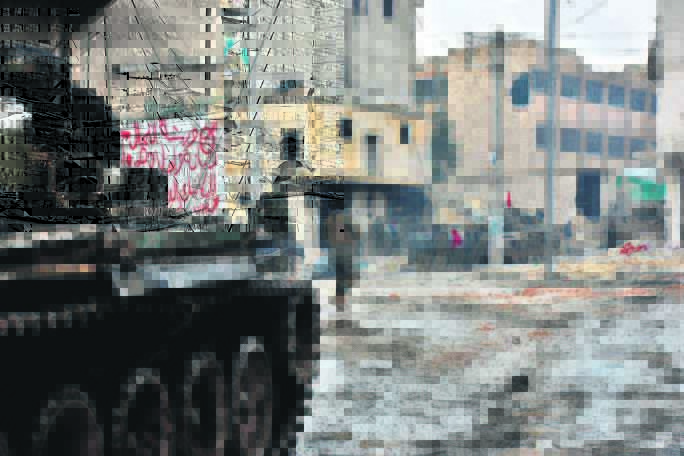 The Iranian regime, through the Shiite militias it supports in Iraq and Syria, is trying to create a zone of influence before the new Trump administration is sworn in.
by Fahrettin Altun Dec 16, 2016 12:00 am

Aleppo is faced with a massive humanitarian tragedy, heavy massacres and the threat of genocide. The Assad regime, with the support of Russia and Iran, was able to occupy previously opposition-held eastern Aleppo. Having gone through a long period of aerial bombardment, the city was shaken by destruction and the deaths of hundreds of civilians. Today, Aleppo no longer exists. Aleppo is a ghost city. However, the people living within her are real. As are the pains that are being experienced.

For some time, Turkey has been leading intense diplomatic efforts for the resolution of the Aleppo crisis with Russia. President Recep Tayyip Erdoğan has met with the Russian President Vladimir Putin many times on this issue. Foreign Minister Mevlut Cavuşoğlu is also in close contact with his Russian counterpart Sergey Lavrov. Turkey has put in significant efforts to establish an immediate cease-fire and form humanitarian corridors. With the most recent status of the situation, Turkey, to be blunt, is engaged in efforts to protect the civilians in Aleppo from experiencing genocide.

Unfortunately, there is no genuine contribution coming from the West, that is the countries of the European Union, and Barack Obama's U.S., no one seems to be keen on ending the ongoing humanitarian crisis in Aleppo. The Obama administration has opted to maintain the attitude it has taken up since the beginning of the Syria crisis: Acting righteous about Syria on a rhetorical level but in truth, abandoning Syria to Russia and Iran. This is what the Obama administration continues to do.

Those close to the Obama administration also regard Turkey negotiating with Russia over Syria as problematic. But really, who is it that handed over Syria to the Russians? Was it not the Obama administration itself? So in this case, with whom should Turkey be negotiating on the solution of the humanitarian crisis going on in Syria? The Assad regime?

There is a very painful picture facing us. And it is not possible for this painful picture to be changed easily. On the ground, the militias that are under Iranian control have made the situation even worse. If Russia stops, Iran will carry on. The Iranian militias who broke the cease-fire are now leading ground offensives in order to cause a massacre.

At this point, the question that needs to be asked is the following: What is Iran trying to do? As I expressed in my previous columns, from one perspective, it is doing exactly what other actors have been doing in Syria. It is trying to establish its own area of influence before Trump is sworn in. It is expending great effort to turn the situation to its own advantage.

When considering Trump's potential cabinet and Trump's political discourse, we can see that Iran is being painted as the main other in the Middle East. Discourse on Iran is extremely clear, and harsh. Trump succinctly declares that the Iranian regime is the main source of the chaos in the Middle East. What's more, Trump believes that the recent failed policies enacted by the Obama administration have cleare﻿d the way for Iran. He says that nuclear negotiations with Iran need to be ended. What is being said about Iran is not limited to this. The need to place heavy economic sanctions on Iran is also among the things that are being said.

Whether this discourse on Iran is specifically aimed at mobilizing a sector of American society and is thus merely a political campaign, or whether it will take on an aspect of actual foreign policy remains to be seen. Until that time, Iran is attempting to enlarge its own area and create buffer zones for security. Iran is trying to affect the Western world with a new financial expansion policy. It made one of the biggest deals in its history with the American firm Boeing and signed off on a $16.6 billion deal. In this way, Iran's national air company Iran Air will get 80 planes from Boeing. Iran did not confine itself to just making deals with Boeing. At the same time, it is on the verge of signing a deal with its European competitor Airbus as well. In September, the Treasury Department approved both companies selling planes to Iran.

Within the framework of this new financial expansion policy, Iran decided to also engage in greater commerce with the big companies in Europe. Iran made a deal with Germany's technology giant Siemens to develop railways and to buy 50 electronic locomotives. It appears that Iran will be using its financial expansion policy to keep Russia on its side as well. Undoubtedly, Iran regards the fact that oil prices will rise during this period as one of its most important advantages. However, with the military expansion policy it is leading, Iran is drawing strong reactions from the Islamic world. The increasing distance between Iran and regional countries, who are the true owners, has caused Iran to become even more isolated in a way that has not been seen since 1979. And Iran thinks that it can solve all of this by bribing the West!
Last Update: Dec 16, 2016 2:32 am
RELATED TOPICS