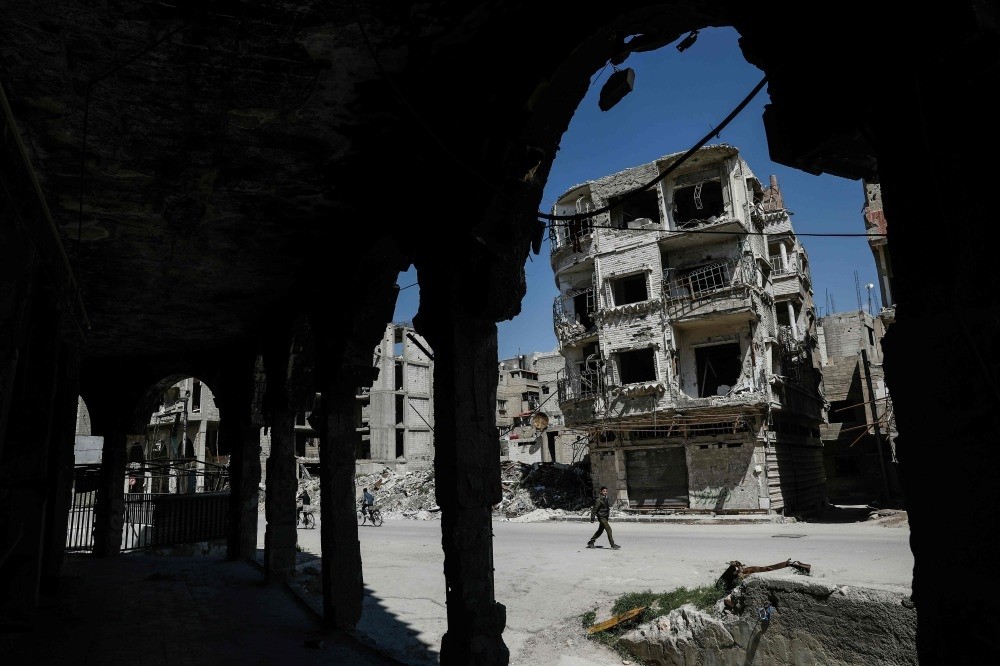 Syrians walking past damaged buildings in the moderate Syrian opposition-held town of Douma on the eastern outskirts of Damascus, April 7. ( AFP Photo)
by Fahrettin Altun
Apr 12, 2017 12:00 am

As the regional actors were taking position according to their solution plan to the Syrian crisis, the U.S. attacked the regime's air base and messed up all the balances

A bloody atrocity has been ongoing for more than six years in Syria in front of the world's eyes. Bashar Assad's regime continues to kill Syrian people - non-stop. The regime's latest massacre took place in the Syrian city of Idlib on Tuesday, killing more than 100 civilians - mostly children - using chemical weapons.

The moderate Syrian opposition was about to overthrow Assad in September 2015, after almost five years of struggling against his regime. Assad was about to be defeated and lay down arms despite the huge support from Iran's Shiite militias on the ground. However, Russia entered the scene on Sept. 30, and prevented the Assad regime from falling. Moreover, Russia started to make its presence felt as an effective power in Syria with its land, sea and air forces. During this process, the U.S. administration of then President Barack Obama only watched the developments from the sidelines. Some were thinking that Obama was mistaken while others thought that he was deliberately waiting to deepen the Syrian crisis.

There are three main perspectives that have emerged in the last six years about the root cause of the Syrian crisis and its solution.

The first one of the three is that the root cause of the Syrian crisis is the Assad regime and it is impossible to establish peace unless Assad is out of the loop. This is the stance Turkey has been taking in relation to the Syrian crisis.

Looking at the statements that were made by President Recep Tayyip Erdoğan on the Syrian war since March 2011, we can see how Turkey has been consistent in its aforementioned Syrian policy.

The U.S.-led Western bloc adopted this perspective from the beginning of the crisis to mid-2013. However, since that time, they have left the theory that "Assad is the root cause of the Syrian crisis" and adopted another perspective. The Obama team started seeing Daesh terrorism as the main reason behind the crisis instead of Assad. In other words, the Syrian crisis was turned into a fight against Daesh, according to the U.S. Moreover, during this process, the Obama administration supported and enhanced another terrorist group, the PKK's Syrian branch, the Democratic Union Party (PYD), and its armed wing, the People's Protection Units (YPG).

U.S. President Donald J. Trump adopted this second perspective until last Tuesday when he implied that he could work with the Assad regime, saying "Our priority is to fight against Daesh." Furthermore, Assad said in January that Trump's remarks were encouraging. However, on Tuesday, Trump said his stance on Assad and Syria had changed, adding that he has a responsibility to intervene and he would be proud to do so. Thus, about 60 U.S. Tomahawk missiles were fired from warships in the Mediterranean Sea, hitting the Assad regime's air base in Syria's al-Shayrat on Tuesday. Well, does this attack mean that the U.S. will change its Syrian policy and go back to its original viewpoint? U.S. Secretary of State Rex Tillerson said their Syrian policy will not change, expressing that this attack is a limited intervention. No matter what, it is obvious that Syrian territory will not be the same after Trump's move. It is not easy for the Trump administration to reverse this severe attitude.

Above, I mentioned the three ways of looking at the Syrian crisis. The third one belongs to Russia and Iran. It is commonly known that Russia and Iran claim that Assad is not a problem and should be a part of the solution. The U.S.'s attack on Assad's air base is likely to lead to disintegration between the actors supporting this third perspective.

Providing regional order and stability dependent on a political solution in the Syrian crisis is the main priority. It can possibly be provided, but three factors are necessary: First, preserving the territorial integrity of Syria, second, deactivating the Assad regime and instead helping a democratic governing mechanism to appear in the country, and third, an all out fight against all terrorist groups in the region without discrimination.

This turmoil is showing us again that Turkey must not merely be strong in the region but be stronger.