The real other in Europe isn't Erdoğan, it's Islam 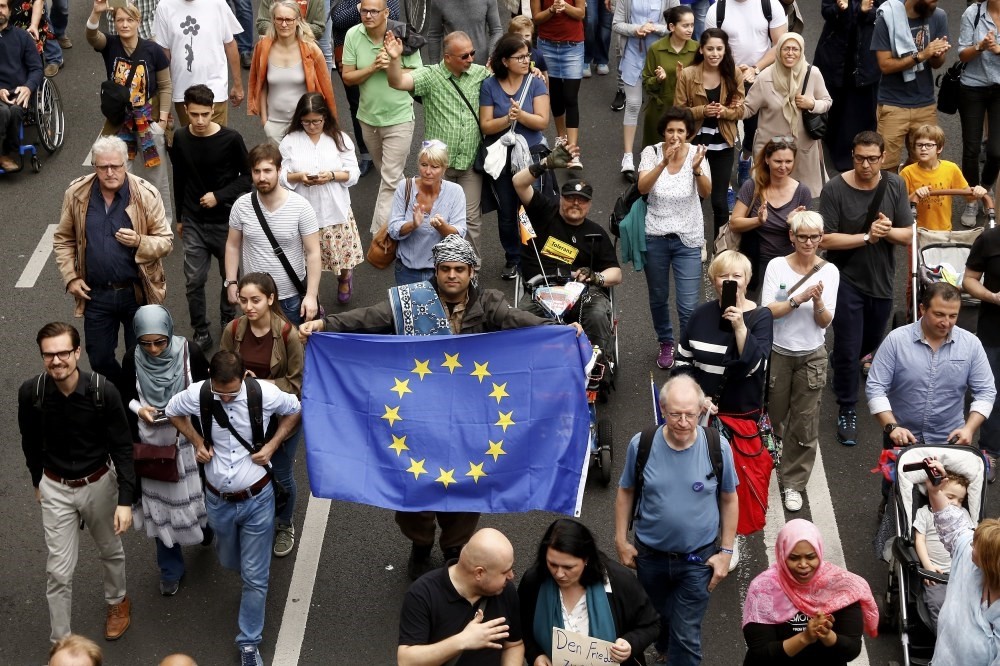 People take part in 'The Not With Us' rally against the increasing Islamophobic and extremist attacks across the European continent, Cologne, Germany, June 17.
by Fahrettin Altun Jul 04, 2017 12:00 am

Upon seeing that Turkey was at peace with Islam and intent on repairing the state's relationship with religion, EU leaders became critical of Turks and adopted an openly anti-Turkish, anti-Erdoğan tone

Germany's hostility toward Turkey and Turks seems to be a bottomless pit. Following Chancellor Angela Merkel's suit, German politicians have been doing everything in their power to express their opposition to President Recep Tayyip Erdoğan. They are currently busy trying to ban Erdoğan from giving a public address in Hamburg, where he will attend the G20 Summit later this week. German authorities have been so passionate in their criticism that one could easily assume that the Turkish president wants to speak at German parliament. Needless to say, efforts to prevent Erdoğan from addressing Turkish-German citizens in Germany do not comply with diplomatic etiquette.

The German government's objections are partly related to the September 2017 parliamentary elections. Merkel seems to believe that the Turkish-German community in the country has no choice but to vote for her, which is why she thinks she can treat Turkish-German voters poorly and fuel anti-Erdoğan sentiment to win over her opponents. However, it is important to acknowledge that Germany's hostility toward Turks goes beyond everyday politics. There is an underlying hatred that has become part and parcel of European culture. Their hate is directed at the other, which has come to be associated with Islam.

The same narrative is currently being pushed by major European media outlets, which claim that Islam cannot be assimilated no matter the steps their governments take. As bigotry becomes more and more visible, the notion that European civilization is inherently and exclusively Christian becomes mainstream. When late Prime Minister Necmettin Erbakan said that the EU was a Christian club, pro-Western elites raised hell in Turkey. Today, they seem to find themselves at a loss for words, although the Western media portrays Muslim immigrants as an occupying force and Europeans increasingly reference the Siege of Vienna and the crusades.

Now more than ever, Europeans consider Muslim immigrants a serious problem. For some reason, Europe seems to be unable to assimilate newcomers. First, they argued that assimilation was not part of their agenda. Then they reached the conclusion that Islam simply could not be assimilated, which is an admission of defeat.

In truth, European governments did everything in their powers to try and assimilate Muslims under the pretext of integration and coexistence. But what they actually wanted to accomplish was to assimilate and transform immigrants. Muslims, Europeans believed, deserved to either live in Western colonies or as a minority in Europe.

To be clear, Europe was supportive of Turkey at one point. European governments extended their hands when they thought that Turkey was a secular and pro-Western society that completely excluded Islam from the social and political domains. Upon seeing that Turkey was at peace with Islam and intent on repairing the state's relationship with religion, they became critical of Turks and adopted an openly anti-Turkish, anti-Erdoğan tone.

In Germany and elsewhere in Europe, hostility against Turks and their president stems from hatred of Islam. We must know and acknowledge this however sad it might be.