Kosovo is only a beginning 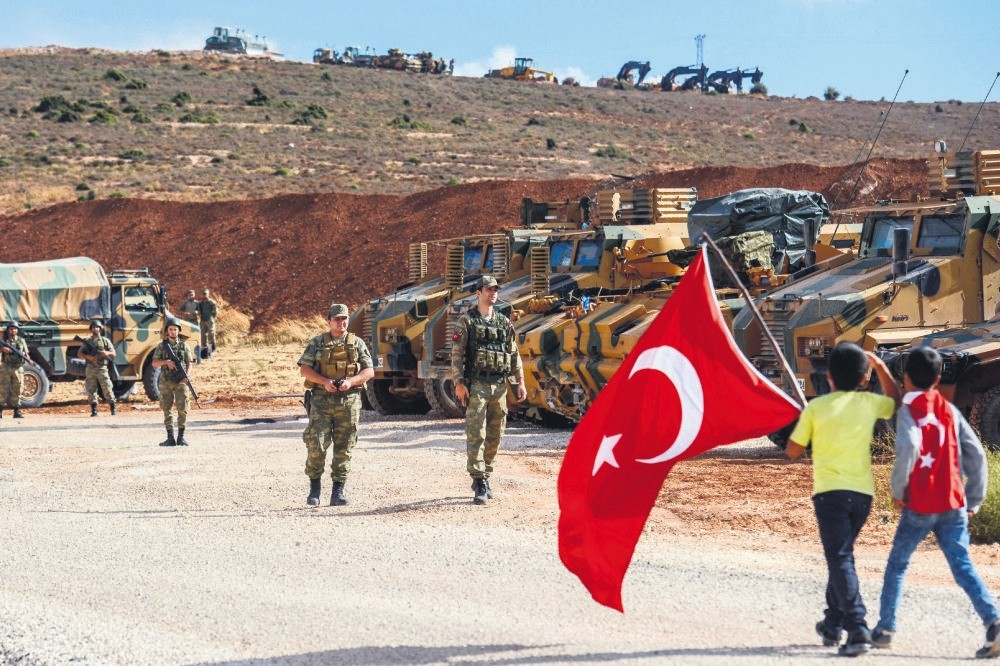 Young boys carry a Turkish flag during a demonstration in support of the Turkish military's operation in Idlib near the Turkish-Syrian border in a bid to create a de-escalation zone, Oct. 10, 2017.
by Fahrettin Altun Apr 12, 2018 12:00 am

As Turkey grows in power, its fight against terrorist groups becomes more effective. Above all, the international actors patronizing terrorist groups have begun to revise their positions and withdraw support to the groups they deployed as proxy forces as the country's deterrence capacity increases.

The U.S.-People's Protection Units (YPG) relation sets a perfect example to this. Of course, the U.S. has not yet withdrawn its support to the outlawed PKK's Syrian affiliate YPG. U.S. Central Command (CENTCOM) officials in the field in Syria are still defending and advocating for the YPG. For Washington's political elites, however, it becomes increasingly harder to side with the YPG. Only two years ago, everyone in Washington glorified the YPG and represented the group's militants as dauntless warriors fighting against Daesh. They also praised the women warriors in the Women's Protection Units (YPJ), stressing that it is a secular liberation movement fighting against religious terrorism. Moreover, they unleashed a diatribe about Ankara's anti-YPG policy and blamed President Recep Tayyip Erdoğan for it.

Today, the number of people who passionately defend the YPG has dramatically decreased in Washington. Those asserting that support to the YPG must continue pragmatically have hardly any justifications.

Contrarily, it becomes more obvious each day that continuing support for the YPG harms U.S. interests. So what good does it bring to support the YPG from now on for U.S. interests as the presence of Daesh in Syria is about to end? The answer that the YPG will be employed to restrict Iran is not so plausible.

It is a fact that the new foreign policy administration in the U.S. has restricting Iran among its targets. U.S. military officers in the field also claim that the YPG might be employed to that end. But the new foreign policy administration does not seem so certain about it. The White House and the Department of State want to receive Ankara's support in restricting Iran. On the other hand, Turkey has demonstrated two important things to the U.S. First of all, the YPG does not constitute a considerable power in the field and does not have the capacity to withstand the Turkish military and its air power. Secondly, it was clearly seen that Turkey regards the Democratic Union Party's (PYD) sovereignty in Syria as a threat and can take all kinds of initiatives to prevent it. To put it another way, Turkey both subverted the YPG myth and showed that it has the political will to exert hard power when necessary.

All these factors oblige the U.S. to undergo a change in its line of conduct. Turkey is currently working toward eradicating the PKK and the YPG in Sinjar, Iraq and Manbij, Syria, respectively. It is not yet known whether these steps will be taken simultaneously or successively. In this process, the U.S. administration will see more clearly that guarding the YPG is no longer justifiable in the eyes of both domestic and foreign public opinion.

The U.S. would have supported the YPG more clearly and strongly had Turkey not initiated its cross-border operations thanks to its strong political leadership, domestic and national defense industry and powerful military. Currently, the U.S. tries to assign the group to the patronage of another Western actor in the medium term so as to prevent a possible alliance between Russia and the YPG. To that end, they are looking to mobilize France.

Furthermore, as Turkey gains strength, the Gülenist Terror Group (FETÖ) loses its credibility abroad. For their Western protectors, FETÖ was important for its capacity to inform and ignite conspiracies in Turkey. Its capacity has now declined to a great extent, and we will surely see its outcomes soon. I can safely argue that Kosovo was only a beginning and the rest is yet to come. FETÖ will be eradicated just like the PKK will be.