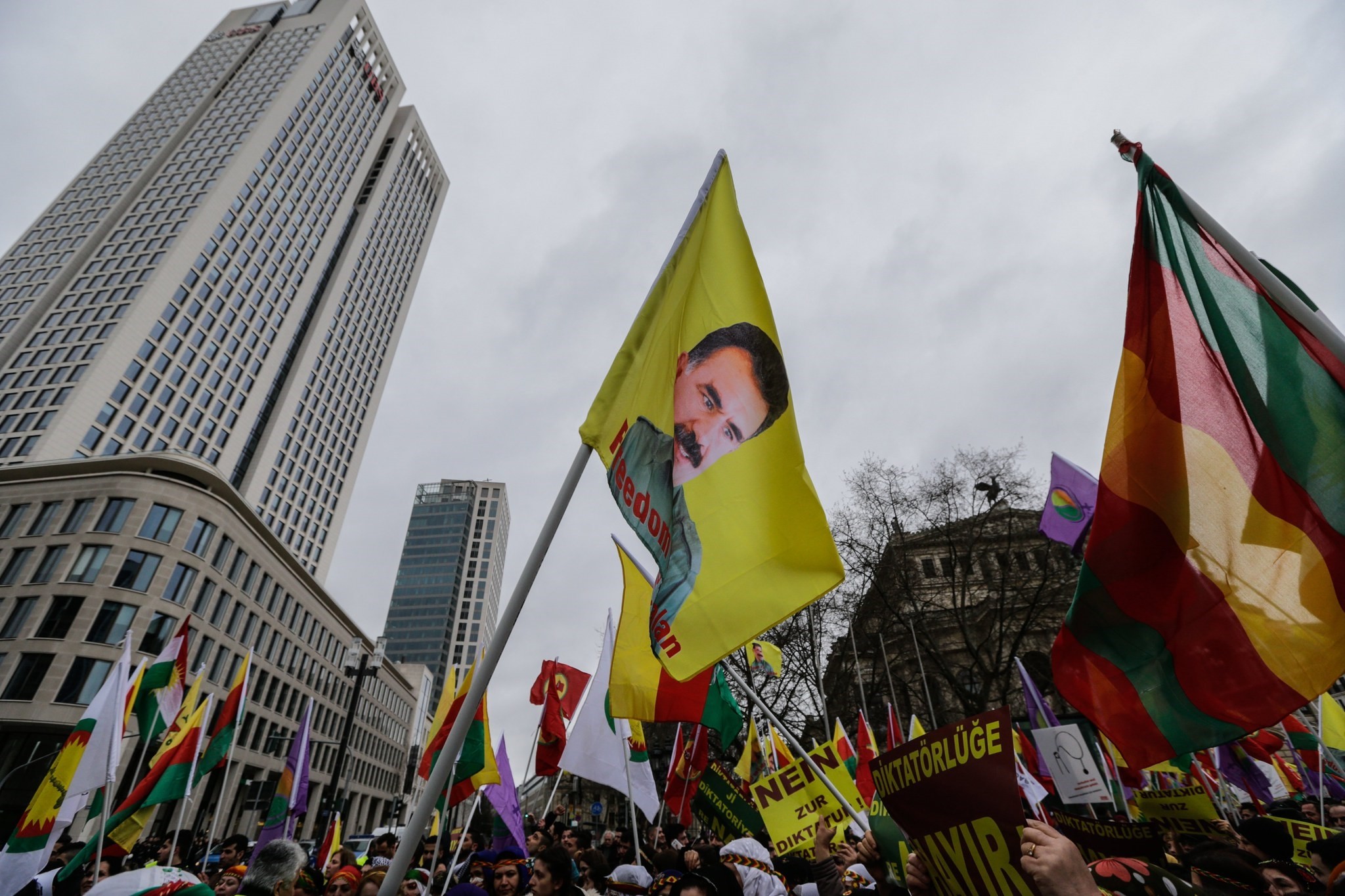 PKK supporters carrying banners propagating for the u201cnou201d camp for Turkey's upcoming constitutional referendum on April 16 and a flag with a picture of the imprisoned leader of the terror group, Abdullah u00d6calan, Frankfurt, Germany.
by Hakkı Öcal
Mar 20, 2017 12:00 am
In diplomacy, you have only the power of words. If one country is condemning an ally, it represents the end of the rope. Turkey's presidential spokesperson İbrahim Kalın said the other day that Turkey condemned Germany for openly supporting terrorism and allowing a PKK march. Some European countries have been interfering with the propaganda activities regarding the referendum Turkey is going to have in less than a month. The subject matter of this referendum is rather complicated: a bill altering 67 sections in the country's constitution and they need explanation.

Since it is not an election, you cannot ask for the votes of the people directly. Inside the country, the subject has been discussed at length, but for the Turkish people living and working in European countries, the matter needs more clearheaded discussion.

That is the reason why many Turkish people and groups have been flocking to the streets in Europe to explain and ask for the vote in the referendum.

Thanks to the recent changes in the law, eligible Turkish people can vote in the elections and referenda from outside the country.

The PKK terrorist organization is known for its opposition to the unification of the offices of the head of government and the head of state in a presidential governmental system. They said in their intercepted communications that a stronger government system would be the end of their terror network.

Their leaders said clearly in their open statements that their organization would fight against the people's approval of the proposed constitutional changes "with whatever tools available to them within the country and in Europe."

The tools they use are not to explain the changes in the constitution. As they displayed throughout Germany last weekend, they simply threaten the people by showing the terror symbols they have been using for the last 30 years. The German government, who banned the meetings between the proponents of the constitutional reform with Turkish-German citizens, allowed and protected the PKK's demonstrations. During these demonstrations, pro-PKK groups simply urged the people to say "No" to the changes without saying why.

The PKK is officially recognized as a terrorist organization according to the German government and the EU bureaucrats.

Accordingly, any terror organization's symbols and slogans should be banned. Their flags and the posters of its henchman blacking the streets in Germany should not to be allowed. But they were. Millions of Turkish people all over Europe watched the PKK's threads painfully on their television sets.

This symbolism, approved and allowed by the German government, is not acceptable to Turkey or to Turkish-German citizens. No civil society should accept a blatant display of terrorism in its cities, but Germany did. What could Turkey do against this unabashed exhibition of animosity toward an ally country?

The Turkish president's spokesman and the Foreign Ministry used the word "condemn" when expressing their protest of the German government.

Are the Germans listening?