Is taking down the statue of Robert E. Lee wrong? Then why not back Trump? 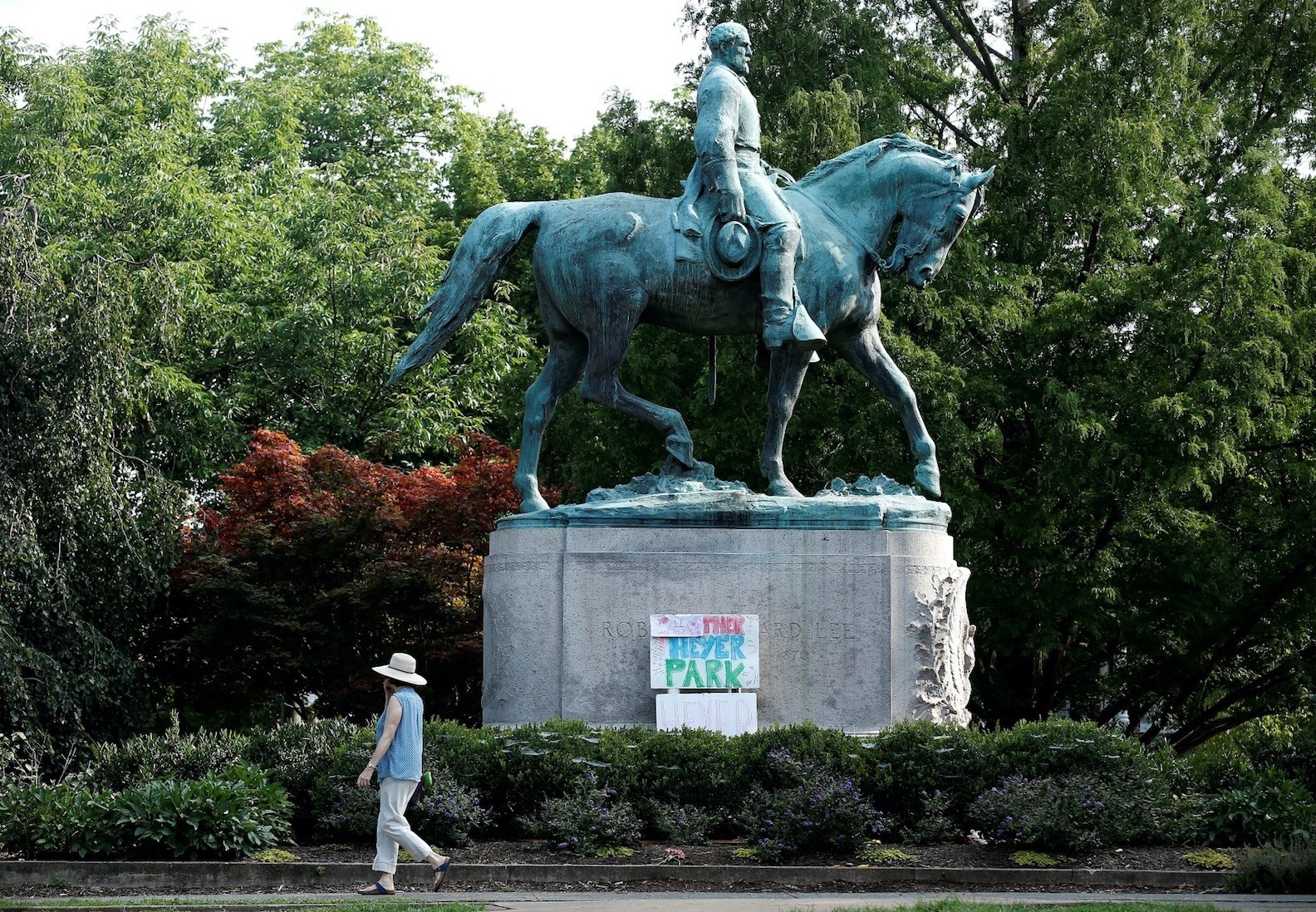 As long as Trump defends the idea that taking down the statue of Robert E. Lee is wrong, many more Heather Heyers will be victims of a civil war, fought and lost a long time ago

When my wife and I first saw the confederate monument in Virginia, our home for three decades, we had to find somebody and let them explain to us this inexplicable anachronism: no matter what the Civil War, the valor and gallantry of its soldiers and commanders meant for the grandchildren on the both sides, the Confederate States of America, a self-proclaimed nation of 11 secessionist states of the United States, existing from 1861 to 1865, was an attribute of a period which clearly did not belong to the United States of America. It is anachronistic to suppose that the morality, social and ethical values of the founding fathers of those 11 states are things that we, today, could learn from, emulate in our personal lives and teach to our kids:

"Here junior; look at the statue of that brave general! He ordered thousands of young men like you to kill his fellow countrymen so that they could buy and sell African people smuggled into our country. They used to call it slavery!"

For a Turk migrating to the U.S., the secession was another word for dismembering a country. Our country had been through that process in the lifetime of our fathers and grandfathers. The wound was so fresh that the scab hadn't formed there yet! Our grandmothers used to weep remembering their hometowns that they could not visit anymore. I used to reflect on the statue of Gen. Robert E. Lee in Richmond, and think: "Why, oh why are they venerating this man?"Yes, he is a very brave individual. I understand that. The battlefields possess national significance in commemorating the history (I wish Turkey had such respect to its own battlefields). I agree with Ken Burns, the famous maker of the best Civil War documentary, that if you want to understand American politics today you have to understand what the Civil War means to Americans.

I understand all that… But why the statues? Not small bust sculptures in a museum; but huge monuments soaring one hundred and nine feet in the air, dominating entire neighborhoods around them. Not one, but 200 of them! What are you teaching kids by naming the elementary and high schools after the Confederate officers!The African-American colonel in the Marines, our next-door neighbor in Lake Occoquan, VA, used to say in a whisper while we both were mowing our yards that those were the sticks "the soft speaking man still carries."

Later we met "the man." This once it was a waitress in a pizzeria in small southern town; she shrieked at the African-American family that she had have wait all day for their "goddamned" order. When my wife and I left the establishment in a silent protest, she had no clue why "such decent white folks like us" would take offence at her attitude.

We saw the man when he asked the African-American women not to hand pick tomatoes, when I, right there was busy practically making tomato juice selecting mine. When one poor woman left the grocery store almost in tears, he tried to trash her to me saying "Them people, you know!"

We did not know what we should know about them people. Later we learned: some white folks really, truly, deeply hated the people of color. They would not mind calling them the N-word when they were not in the earshot.

Another thing in this new adopted home of ours that was as alien to a Turkish psyche as the British flag unfurled on Istanbul Streets during the Armistice and Occupation years, was the display of the Confederate flag used by the Confederacy. It adorned the "Southern cross" used in the battle flag of General Robert E. Lee's Army of Northern Virginia. In ThinkProgress blogger Sam Fulwod III's words, it was the flag of the "South's Lost Cause," a blot on the nation's history. Why would anybody fly it on the state houses of some Confederacy states? There was something wrong that all those professors of constitutional law, all those whiz-kids of television talk shows, all the democrats, liberals, progressives, all the Yankees of Massachusetts, New York, Pennsylvania, all the scholars of the Gettysburg address and all the documentary makers of Hollywood, would not raise their voices against it. Why?

Later we saw the man; this time he was orange in color and a candidate for the president.

You, the people the "tired, poor and huddled masses yearning to breathe free," had fought to make your real America multiracial, multicultural simply because you strongly believed in the idea that all men were created equal, and entitled to basic human rights. The "Mother of Exiles" extended a worldwide welcome from her beacon-hand, and they all came. Some to take refuge from their murderous regimes; some to work, but all had come. And now you had a candidate, who was busy to do adolescent boys' talk with TV hosts behind cameras and speak to the people wh

o were boldly flying the Confederate flags in front of the cameras. He did not show them away saying, "Look folks, I love ill-educated people like you; but this is a democratic rally; the flag you have in your hands symbolizes political ideals that are not compatible with democracy."

No, quite the contrary; Mr. Donald Trump embraced them. He unabashedly welcomed those thugs. He did so when he condemned the affirmative action. He did so when he questioned Barack Obama's birthplace. He knew his "birther campaign" was based on a lie; Obama was born on American soil. He did not ask his campaign manager to take the Confederate flags down because it represented the supremacy of a race. Had he not bragged about the superior genes he had? He blatantly said that his family believed in "a racehorse theory of human development.""They believe that there are superior people and that if you put together the genes of a superior woman and a superior man, you get a superior offspring."

Well, Hitler had subscribed to that theory too. The American voters could have seen the parallels here. But they did not. Not because they endorsed everything Mr. Trump believed in, but because he promised to bring the jobs back; to make America great again. The American people could see that the idea to bring the jobs back from China, India and Mexico was not about the employment but his deep seated hatred of "the other" people; the people of color.

He called all Mexicans rapists; he promised a wall on the Mexican border; he belittled the parents of a Muslim soldier killed in war. He had as chief strategist Steve Bannon who as editor of the Breitbart web site had the imprudence to call the Bosnia and Kosova massacres "Remove Kebab," implying that Islam was being removed from Europe.

Of course he could not have his picture taken with David Duke with his KKK hood and his arms around his shoulders. The swastika-toting Nazis are tasteless in this day and age. The swastika symbolized a regime that declared war on the United States. Yet they all were present in his election rallies.

And finally Trump talked about the "poetic beauty" of Confederate memorials. He even created a fake memorial in his own golf course. He criticized the removal of them, taking sides with the protestors in Charlottesville.

As the former governor of California, Arnold Schwarzenegger said on TV "There are not two sides to bigotry, there are not two sides to hatred." But the president of the U.S. had the temerity to equate those demonstrators who were armed to teeth with automatic rifles and defending to keep the Confederate statues in place with the people protesting against them. One sympathizer of the statue defenders even drove his car into the counter protesters. According to the British newspaper, The Independent, Ku Klux Klan leader Justin Moore has said he is happy Heather Heyer died while taking part in a protest against white supremacists in Charlottesville. President Trump, perfunctorily, condemned this murder, only to rescind his words the next day and to equate Ms. Heyer to white supremacists:

"I'm not putting anybody on a moral plane," he said. "You had a group on one side and group on the other and they came at each other with clubs."

Heather Heyer did not have a club; and she was not violently attacking anybody. She simply believed in the values that America claims to be built upon.

Trump still defends the idea that taking down the statue of Robert E Lee is wrong. He fired Steve Bannon; but the specter of his ideals still haunts the White House: the specter of white supremacy. As long as Mr. Trump resides in the White House many more Heather Heyers will be victims of a civil war, fought and lost a long time ago.