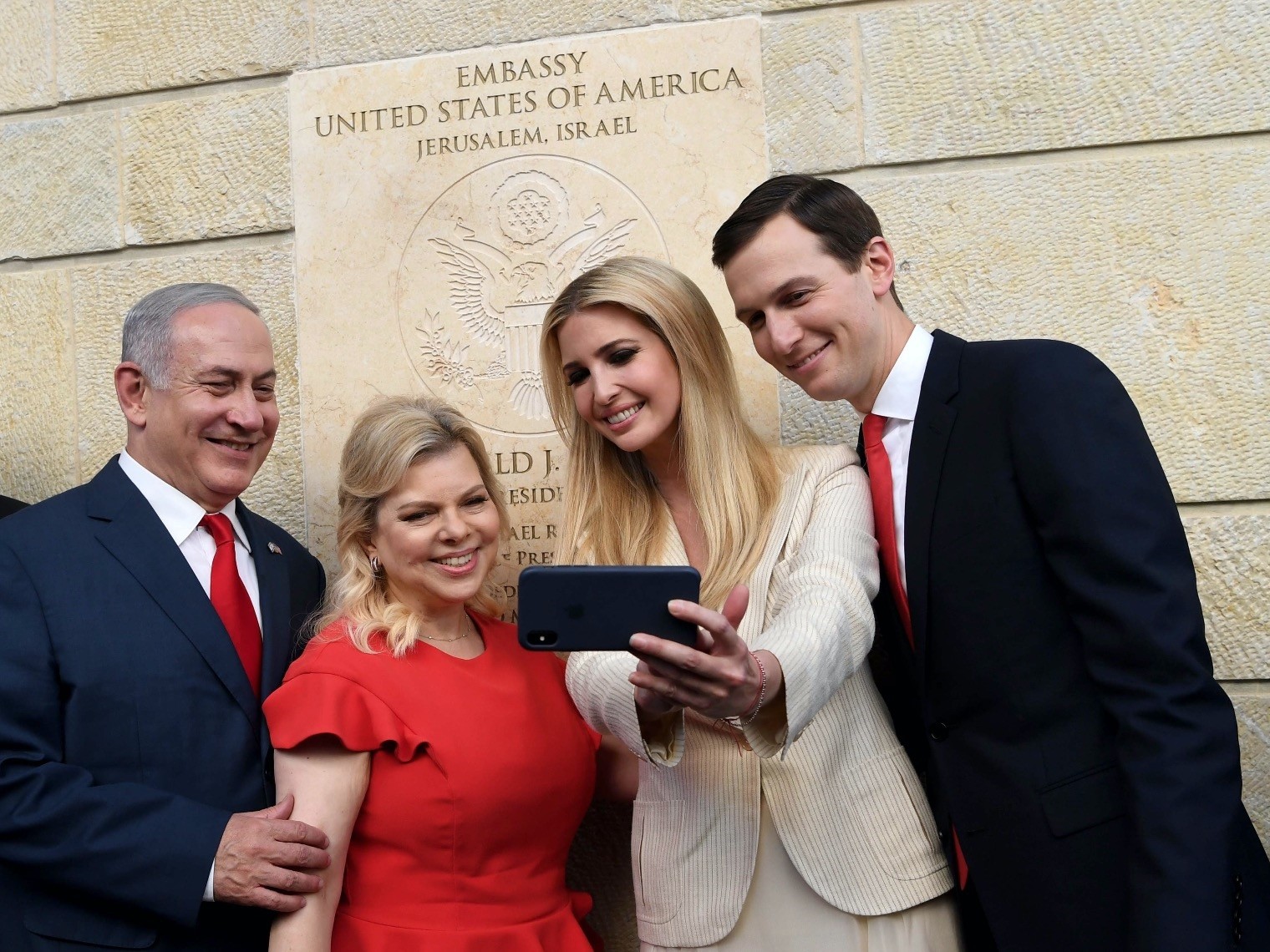 Israeli Prime Minister Benjamin Netanyahu and U.S. President Trumpu2019s son-in-law and adviser Jared Kushner, seen with their wives during the controversial relocation of the U.S. Embassy to Jerusalem on May 14, suggested the founding of an Arab NATO.
by Hakkı Öcal
Jul 30, 2018 12:00 am

The formation of a puppet organization composed of Sunni Muslim 'allies' would help the U.S. and its traditional ally Israel have a free hand across the whole region

The Saudis are playing their cards all wrong once again if they are really pushing the United States to create a military alliance against Iran. Reuters news agency claims that it had its report confirmed by four different sources; yet, it is not clear where the idea "to create a new security and political alliance with six Gulf Arab states, Egypt and Jordan to counter Iran's expansion in the region" originated. Is it the Saudi officials who suggested the creation of this alliance, tentatively known as the Middle East Strategic Alliance (MESA), during Trump's visit to Saudi Arabia last year when he announced a massive arms deal, or is it the White House that wants to see deeper cooperation between these countries on missile defense, military training and counterterrorism?

If you bother to do a simple internet search you see that the original inventor of the idea was (surprise!) Israeli Prime Minister Benjamin Netanyahu who, through his best friend Jared Kushner, injected the idea that only an "Arab NATO" of Sunni Muslim allies would likely stop the Shia of Iran. You can see in various sources that this suggestion was tested when four of these countries almost declared war on Qatar last year. Saudi Arabia, the United Arab Emirates (UAE), Egypt and Bahrain broke diplomatic relations with Qatar in June 2017, alleging that it supports Iran and its terrorist and extremist groups. Qatar rejected the charges, and overnight, Turkey fortified its military presence in Qatar lest these crazy emirs make good on their threat to occupy this tiny but rich country.

After this unfortunate event, the ambitious crown prince of Saudi Arabia, who also happens to be the other best friend of Jared Kushner and an admirer of blue jeans and ten-gallon Texas Stetson hats, signed a massive arms deal with the U.S. If you remember President Trump announced the items of the deal with a creepy smile that suits horse auctioneers and had that big Saudi boy confused if smiling back or inspecting the ornaments on the ceiling of the Oval Office would be better.

Yes, it is true that Iran is expanding its political influence in the region using sectarian differences among the Muslim population. It is also true that it has been supporting terrorist groups destabilizing the region. Should its clients not be acting against official agreements in Iraq and Syria, peace would have returned in the region, and the U.S. and their allies would have no excuses to keep their military presence in those countries. Every Western soldier in Iraq and Syria is a thorn in Muslims' flesh. Iran must not be that irresponsible to legitimize their presence in the region. Every young person in Iran rejects the policies of those reckless mullahs. They don't want to be responsible for hungry and dying children in Yemen; they hate seeing Aleppo in ruins. At the same time, they don't want to be targets of nuclear weapons of the U.S. and Israel.

Yet, the six Gulf Arab states, Egypt and Jordan should be aware of the fact that countering Iran's expansion in the region can only be through diplomacy. Anything else would be playing into the hands of Netanyahu and Kushner. We know, and they know, that the idea of creating a new security and political alliance in the region will only facilitate the U.S. and Israeli bombing of Tehran and other large Iranian cities where those young opponents of the regime will die.

Of course, the White House wants to see "deeper cooperation between the countries on missile defense, military training, counterterrorism, and other issues such as strengthening regional economic and diplomatic ties," as reported by Reuters news agency. Naturally, the White House is happy with what Reuters calls "the concept of the alliance with our regional partners."

They are "useful idiots" as Lenin used to call their ilk; and that idiocracy was all over the face of the Saudi crown prince at that White House auction.