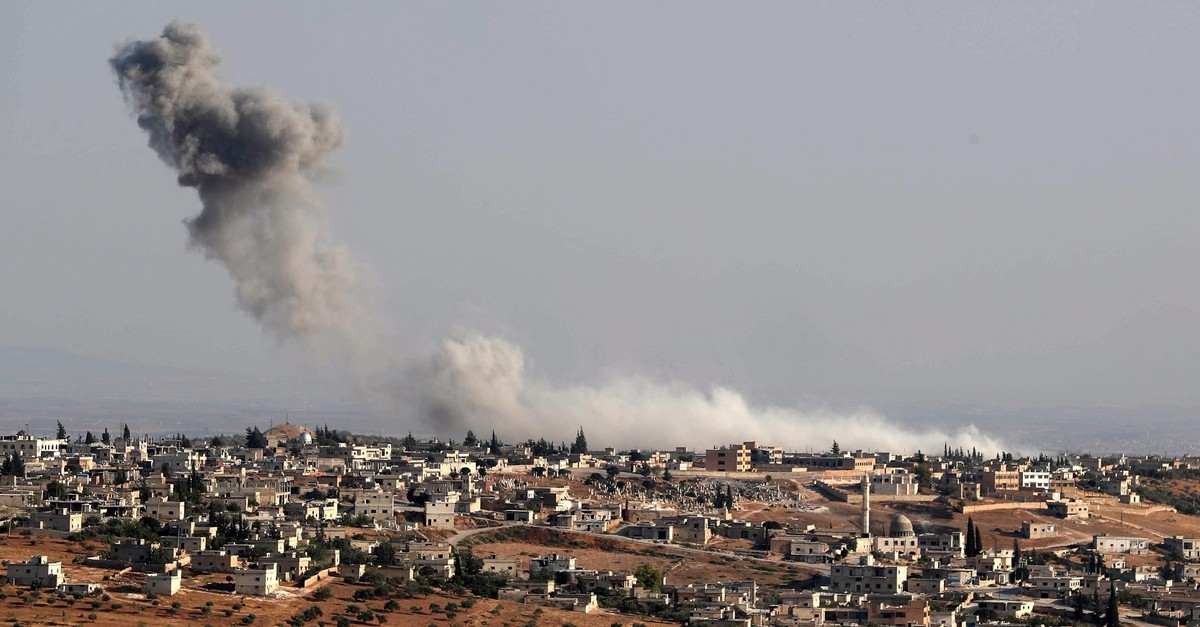 Smoke billows following deadly regime airstrikes on the village of Kafr Sajna on the southern outskirts of Syria's Idlib province, August 16, 2019.
by Hakkı Öcal Aug 19, 2019 1:39 am

This "North and East Syria Administration" term first appeared in a PKK-related news organization's article paraphrasing one of Jim Jeffrey's many reversals of his stances. The U.S. special envoy for the Global Coalition to Defeat Daesh appears to be a calculating, manipulative person; he agrees with something in Ankara but when he goes back to Washington, he starts adding new conditions to his promises.

For instance, the long-time diplomat said the safe zone joint headquarters which is under construction in Turkey should be "sellable to the people of northern Syria." The PKK reported his point in these words: "Jeffrey: 'We won't impose anything the North and East Syria Administration won't accept.'"

So now we have a definition, apparently in use among the U.S. military and diplomatic representatives and the PKK's Syrian extensions, the Democratic Union Party (PYD) and People's Protection Units (YPG) terrorists: the "North and East Syria Administration." Let me have the first honor of abbreviating it to NESA. It appears that the U.S. State and Defense Departments will make sure that that entity– for what its worth – would survive after all U.S. posturing to "alleviate Turkish concerns." This term, used many times by the former envoy Brett McGurk seems, in turn, to be putting someNovocain on an aching Turkish tooth.

Turkey, Russia and Iran are trying to put out much larger fires in Syria but may not be able to pay enough attention to that NESA abscess for now. Besides, Bashar "The Murderer" Assad may like the idea of having something between him and the Turkish Army. This is scenario No. 1: Killing many birds with one terrorist entity: creating a fighting force against Iran, erecting another shield after illegally annexing the Golan Heights to Israel; delivering on the promise of protection to the PYD/YPG in return to their participation in the fight against Daesh.

If Mr. Vladimir Putin takes his time from motorbiking across his country and stops the massacre in Idlib pushing his beloved Assad back, a constitutional conference may be put together in Geneva and what the Red Cross declared a civil war seven years, nine months, three weeks and two days ago could peacefully end. This is scenario No. 2. In this case, the torture Turkey, Lebanon and Jordan have been enduring because of the Syrian refugees would end. The refugees also would finally be saved from the misery they are in. Assad might survive under a democratic constitution, some fear. If the constitution creates a democratic society, it can survive many Assads. The U.S. is surviving President Donald Trump. Is it not?

Usually the third scenarios are the apocalyptic solutions and in Syria, the situation may get out of control because of an off-site development: namely in the Gulf or in the Eastern Mediterranean. The number of players are comparatively smaller in the former region than the latter: Iran's Islamic Revolutionary Guard Corps (IRGC) are a bunch of trigger-happy soldiers but the chief mullah may elect to prove that they are the brave helpers of the messiah who would appear in a real apocalyptic chaos as the revolutionary guards or as U.S. Vice President Mike Pence "The Evangelist" seem to think. Two crazy people on one tight rope constitute the most dangerous act in circuses.

The Eastern Mediterranean situation seems more controllable. But sobriety has not been historically the strongest character trait of the Greek Cypriots. There are too many ships with cannons in a very small area, and those cannons are owned and operated by very greedy oil and gas companies. With the el-Sissis, Netanyahus and Mitsotakises there are too many moving parts in the equation.

In such a fraught situation, casualties in Syria will be too small to count. Which entity could survive and which lands would not be under occupation and which would be free out of it are anybody's guess.

What is important is that Turkey is busy erecting a headquarters for the Syrian safe zone with the U.S., and this is because it still chooses to trust the U.S.