The US is robbing Iraq's future 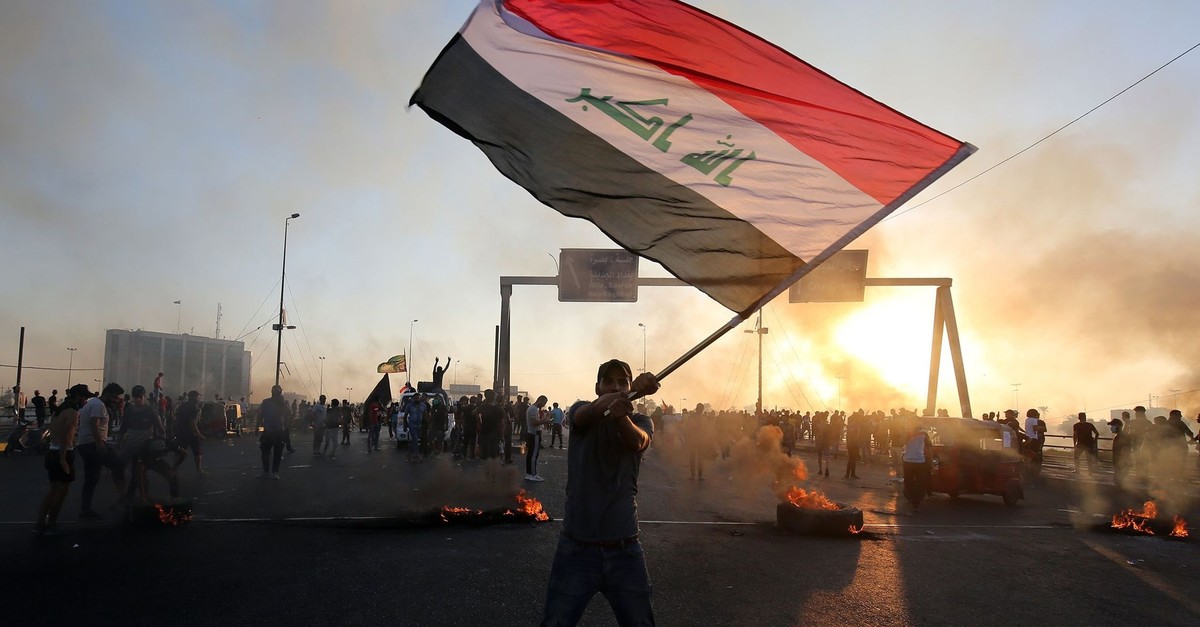 An Iraqi protester waves the national flag during a demonstration against the government, in the Iraqi capital Baghdad, Oct. 5, 2019.
by Hakkı Öcal Oct 07, 2019 2:23 am

The instability created by the U.S. in Iraq still continues to haunt the whole country, this time affecting unemployment and corruption

The Iraqi protesters killed last week by the live ammunition used by the police in Baghdad were only five or 10 years old when the U.S.-led coalition (read the U.S. and the U.K.) sent 177,194 troops into Iraq to invade the country on March 19, 2003.

Then-U.S. President George W. Bush and British Prime Minister Tony Blair looked for the weapons of mass destruction they had claimed Iraqi dictator Saddam Hussein had stockpiled to destroy Western civilization. Bush and Blair found nothing, but hanged Saddam anyway and freed the Iraqi people from oppression! They had also given the Iraqi people democracy, Paul Bremer as their new governor and — according to the U.K.'s Lancet survey 654,965 dead people. Not only that, but Blair and Bush sent the Iraqi people a bill for all the incurred expenses. The costs of the Iraq war were estimated at $5 billion and the Iraqi people are going to "compensate" the U.S. every dime of it. Iraq has the world's fourth-largest oil reserves, but the U.N. Security Council receives all the Iraqi oil revenues in an escrow account since 2005. Only a trickle of that money goes to the Iraqi people.

Iraq imports its gasoline from Iran. Some 25 million of its population of 40 million lives on less than $6 a day. One out of four people under the age of 25 is jobless and without a hope of employment. Thousands of them, mostly men, have begun protesting this poverty. It started in Baghdad last Tuesday and spread to cities throughout the south. Some sources say they appear to be a spontaneous outburst of anger and these people belong to both sides of Iraq's major sectarian and ethnic fault lines.

The truth is that the U.S. and the British have not only robbed the Iraqi oil revenues and forced people to a beggarly existence in the slums, but they have also ruined Iraqi's intricately balanced social and political systems, which could have brought the country back on its feet.

Saddam Hussein and his Baathist regime had managed to keep that complicated equilibrium among the Shiites, Sunnis, Christians and Yezidis, as well as the Kurds, Arabs and Turkmens. The country had a very effective tribal "shoura" system; the Baath party, which had started its existence as a socialist client of its Soviet patrons, managed to balance all the modern and archaic interest groups.

Basically, Saddam and his Baath Party had managed the apportion of power and oil revenues. His powerful central army prevented any regional or ethnic contender from harming their weaker neighbors. Despite the long years of infighting among the Kurdish tribes, a finely tuned regional autonomy made the Kurds a happy participant in the society. You can see that the PKK was never able to create a beachhead for its terrorism in Iraq as it did in Syria.

Paul Wolfowitz, then-deputy secretary of defense and the inventor of the neoconservative ideology of world dominion (now serving as a visiting scholar at the American Enterprise Institute keeping the neocon torch burning), single-handedly ruined that social and political fabric and pushed Iraq into the disaster it is in today.

The U.S. Defense and State Departments, with the help of the British authorities, created a rushed and divisive constitution that was doomed to fail from the beginning, whereas almost all the countries the Ottoman Empire gave birth to had either absolute or constitutional monarchies, which were later replaced by presidential systems.

The power-sharing model the U.S. imposed on Iraq could not deal with the broken regional and tribal fabric. Obviously, the country, deprived of its oil income and unable to recreate its commercial and industrial systems to feed its 40 million people, was going to face an economic and social disaster at any time.

While Iraqis are killing each other once again, the benefactors of the situation are the PKK terrorists, who find a free rein to base their terrorist teams in Iraq, and the U.S. Central Command (CENTCOM) that uses its occupation forces to train and equip the PKK's extensions in Syria.