Petra's desire for hurt and hate 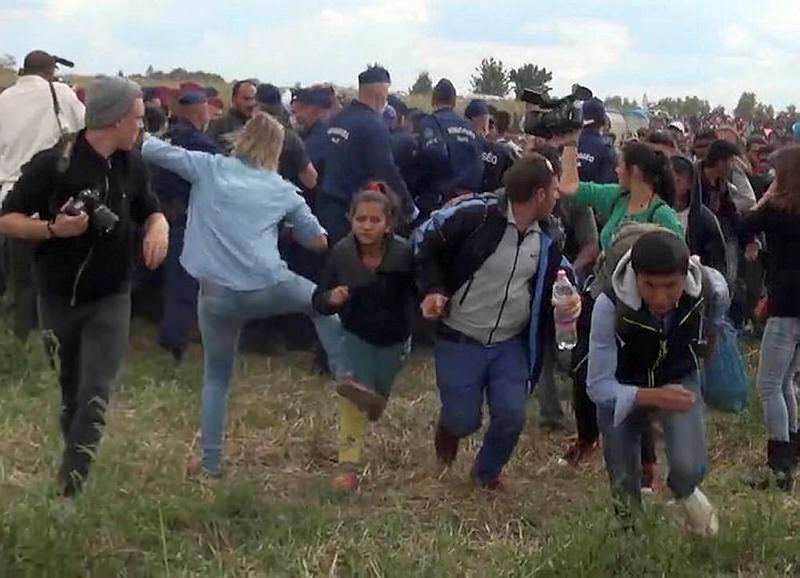 by Haşmet Babaoğlu Sep 12, 2015 12:00 am
The Hungarian camerawoman who tripped a migrant father fleeing from the police with his daughter in his arms and who kicked a refugee child was fired from the N1TV channel she worked for.

As the basis of her firing, the channel announced: "Petra Lazslo's behavior was not compatible with journalism and is unacceptable."

This is how all the new agencies are reporting the story. That is exactly where the problem is.

If she had done what she did just to get a sadder shot, it may have had some meaning, no matter how depraved. Take another look at the videos. Just look at how she behaves. You will see the hate and desire to hurt in her actions. She personifies malice in a human, social, political and cultural form.

N1TV is said to be close to the growing racist and discriminatory Jobbik party in Hungary. Lazslo is reportedly a party member.

So, what will happen now?

Lazslo, who committed such an error at a time when the whole world was watching, will probably be out of job for a while. No one knows whether anyone would have known or cared what had happened if German cameraman Stephan Richter had not shared the video on his Facebook page.

No one will be bothered about the fact that the TV channel will continue to broadcast racist reports within the bounds of journalistic ethics.

And Jobbik will be allowed to badmouth foreigners and increase its votes in every election just because the kicking it is doing is considered normal politicking.

We as a nation also condemned Lazslo for tripping and kicking the desperate refugee with his daughter in his arms.

However, we need to remember certain facts.

We were pleased when Lazslo's Catholic and racist party Jobbik opened a banner during the Hungarian-Turkish football match that said: "We also are the grandsons of Attila the Hun." We were not complaining when the same party harshly condemned the attacks on Turks living in Europe.

But the fact is that the party is trying to find a historical root to their racist ideology, and that is why they are fond of us.

Things are not as straightforward as they initially appear to be. It is about time we try a bit harder to go beneath what we see and understand what it all means.
Last Update: Sep 12, 2015 2:12 am
RELATED TOPICS