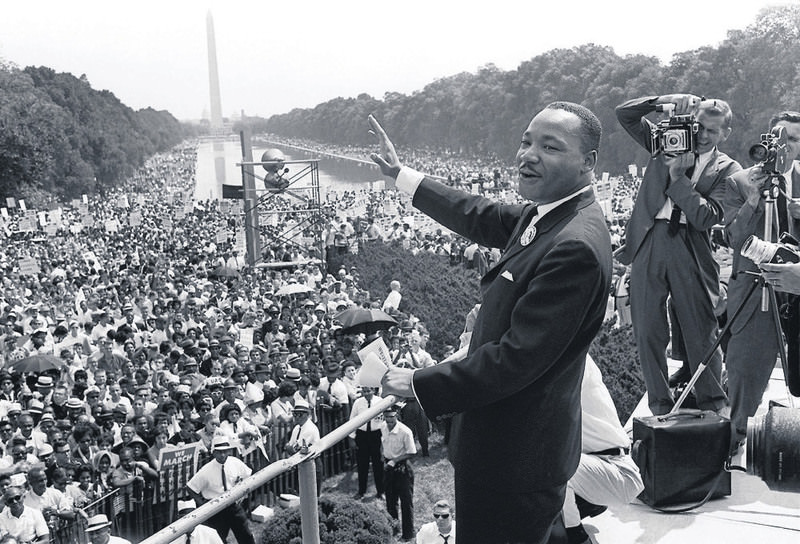 Martin Luther King's speech on Aug. 31, 1967 that warned against the sickness of racism, excessive materialism and militarism continues to resonate today despite half a century having passed.
by Hatem Bazian Dec 24, 2015 12:00 am

Revisiting Martin Luther's speech is instructive for anyone preoccupied with theracism eating at our soul, poverty's death march and the ever expanding military industrial complex cancer devouring everything in sight

On Aug. 31, 1967, Reverend Martin Luther King delivered "The Three Evils of Society" speech at the National Conference on New Politics, which is the most prophetic and revolutionary address to date on the questions of militarism, poverty, and racism. "We are now experiencing the coming to the surface of a triple prong sickness" was how MLK framed the problem that "has been lurking within our body politic from its very beginning." Identifying "the sickness of racism, excessive materialism and militarism" and considering the three problems as the "plaque of western civilization."

Revisiting the speech is instructive for anyone that is preoccupied with the current local-global condition affecting the human family with the visible ravages of racism eating at our soul, poverty's death march and the ever expanding military industrial complex cancer devouring everything in sight. At the time of the speech, MLK was facing increasing white opposition to black empowerment and equality, an expansion of crony capitalism and open ended commitment to military expenditures on the Vietnam war that all together led to deepening poverty and rising discontent in the African American community. The conditions in today's America and the world resemble what MLK described in "The Three Evils of Society" speech in 1967.

MLK spoke of America's "schizophrenic personality on the question of race" with two conflicting personalities. One professing "the great principles of democracy" and another that practices its antithesis. Every step forward in confronting racism in America has an equal step backward, which MLK perceptively identified as the white backlash -- the "old prejudices, hostilities and ambivalences that have always been there. … The white backlash of today is rooted in the same problem that has characterized America ever since the black man landed in chains on the shores of this nation." Racism, for MLK, was that "corrosive evil that will bring down western civilization" and white backlash was nothing more than good old White Supremacy that is never content with equality.

In confronting materialism, MLK forthrightly described the internal conditions of "the ghetto" where African Americans are locked up in perpetual misery as "a domestic colony." The link between poverty and lack of political statesmanship was pointed out. MLK spoke of the readiness of Congress to grant subsidies to the oil industry, while six cotton plantations were given more than a million dollars each "not to plant cotton, but no provision is made to feed the tenant farmer who is put out of work by the government subsidy." "What they truly advocate is Socialism for the rich and Capitalism for the poor" was how MLK described such plans.

Congress, state, and city leadership all worked on disrupting programs intended to uplift African American communities by utilizing the old-boys' political machines. The constant cry against welfare programs is used as a cover to punish the poor while extending subsidies to the rich in society. MLK pointed out that American society is deluded "into believing the myth that Capitalism grew and prospered out of the Protestant ethic of hard work and sacrifice; the fact is Capitalism was built on the exploitation and suffering of black slaves and continues to thrive on the exploitation of the poor." The system is founded upon exploitation and to drive unjustly gained wealth to those on top, and "the way to end poverty" according to MLK is "to end the exploitation of the poor, ensure them a fair share of government services and the nation's resources." To bring this to a real end, a redistribution of political and economic power must take place, which has yet to be seriously attempted or promoted.

MLK's words on militarism and war were haunting, blunt and exact: "This war has played havoc with the destiny of the entire world. It has torn up the Geneva Agreement, it has seriously impaired the United Nations, it has exacerbated the hatred between continents and worse still between races. It has frustrated our development at home, telling our own underprivileged citizens that we place insatiable military demands above their critical needs. It has greatly contributed to the forces of reaction in America and strengthened the military industrial complex. … This business of burning human beings with napalm, of filling our nation's home with orphans and widows, of injecting poisonous drugs of hate into the veins of peoples' humanity, of sending men home from dark and bloody battlefields physically handicapped and psychologically deranged cannot be reconciled with wisdom, justice and love. A nation that continues year after year to spend more money on military defense than on programs of social uplift is approaching spiritual death."

To address the tripartite problem of racism, materialism and militarism, MLK called for "a radical revolution of values" and a need for people to be maladjusted to injustice. The revolution of values is centered on moving away from taking the safe road by not challenging the destructive status quo. MLK concluded the speech by centering the question on what to do based on whether "is it right" and not because politics or popular sentiments demands it. "And on some positions, it is necessary for the moral individual to take a stand that is neither safe, nor politic nor popular; but he must do it because it is right." The time is right to ask the question whether the current wars ravaging the world, obscene militarism, racism and Islamophobia are reflective of the highest human values? If the answer is no, then why the silence!
RELATED TOPICS