Palestine: Where the disabled are not spared! 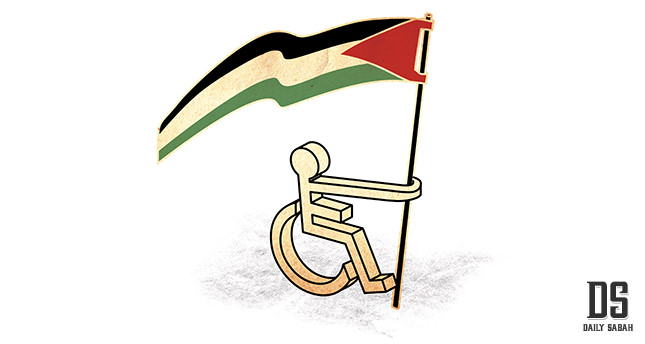 The video images of Majed al-Fakhouri, a disabled 53-year-old Palestinian man in al-Khalil, bound to a wheelchair and being thrown to the ground by an Israeli soldier is sickening and alarming to say the least. Majed's "crime" was that he saw a young 13-year-old Palestinian girl, Yasmin al-Zaro, bleeding on the ground in front of the Ibrahimi mosque after being shot by the soldiers. Majed was concerned that Yasmin was bleeding and the soldiers were not allowing anyone to check on her condition or provide any urgent medical care and possibly save her life. Majed said, "I saw blood coming out of her arm and side and I thought she was going to bleed to death." Commenting further he said, "I tried to help her but a police officer stopped me and ordered me to go back. Then he turned me over and my head hit the ground."

On the same week, an Israeli court convicted and sentenced a soldier to nine months in jail for using a "medical device to shock two Palestinian prisoners in the neck." The court evidence showed that "in both cases the prisoners were handcuffed and blindfolded." The main reason we know of this torture was because the soldier filmed the episode on his phone and his colleagues are heard laughing in the background. The soldier belongs to the ultra-Orthodox Netzah Yehuda Battalion, which has had a number of abuse episodes directed at Palestinians in the occupied territories.

One judge wrote, "there is no doubt the act" by the soldier "was intended to humiliate" but the two Palestinians were not harmed "in a concrete way." This judgment was reached without medical examination or testimony from the prisoners themselves. As we have learnt well repeatedly over the years, the same courts will happily respond to a Palestinian arrested for throwing stones with up to 20 years in prison and collective punishment for the family by demolishing their home or confiscating their land for the benefit of settlers. Palestinians live under a draconian occupation and the system of justice is administered by a military that occupies their land and acts as the vanguard in colonizing Palestinian territory on a daily basis. Of course, the disparity in treatment is directly connected to the over-all structure that exists in the occupied territories.

Coming back to Majed, who is seen in the video pleading with the soldiers to call for help for the teenage girl they just shot; we know that the Israeli soldiers turn against him. Al-Fakhouri provided a detailed account of what happened: "I arrived at the scene to help and rescue the girl, who was fighting death in front of the Israeli border guards... I am a human and I did only what a human is expected to do." Majed described the steps that led to the soldier's action stating: "After I had made my way towards her... I spoke with the Israeli border guards, who were insulting people and preventing them from helping the girl, but one of them yelled at me, told me to go home and brutally pushed my wheelchair backwards." The video shows the wheelchair being flipped on its side and Majed's head hitting the ground.

In the video, a group of Palestinians are seen rushing to help Majed but immediately the soldiers raise their guns, one soldier throws a stun grenade while another is seen chasing the crowd away from helping the disabled man. All the while, 13-year-old Yasmin al-Zaro is wreathing on the ground in pain and agony as the soldiers prevent anyone to come close and administer badly needed medical care.

The Israeli military report makes quick use of the "T" word - the all-encompassing "terrorist attack," to defend the soldiers' action on the scene, while describing the Palestinians' response as a riot. Here, the use and abuse of the designation "terrorist" is used for a catchall charge to excuse Israel's actions against Palestinians and justify violations of the 4th Geneva Convention as far as treatment of civilian population living under occupation.

The assault on Majed and other disabled Palestinians is an indication of the political and social shift in Israeli society led by Prime Minister Netanyahu and his rightwing government. What is rapidly emerging in Israeli society and reflected on the ground among the soldiers is a toxic mix of racism and xenophobia toward Palestinians and African immigrants. This has produced a rise in violent and fascist behavior openly exhibited by settlers in the occupied territories, supported by the military and vitriolic rhetoric by top government leaders, including Netanyahu himself on many occasions. This view was expressed clearly by Udi Aloni, the Israeli director who won the top audience award at Berlin Film Festival, when he called the Israeli government "fascist" while urging Germany to terminate its military support to the state.

When the disabled in an occupied society are not spared, it says a lot about the occupier's society; and not about Palestinians - but Israel, its leadership, and the collapse of a basic moral and ethical outlook. Pointing to Palestinian violence and using it as an excuse will only delay confronting the reality that Israel and Zionism in general have failed to bring about the new hoped for ethical and moral society based on Jewish values. When a soldier assaults a man with disabilities in broad daylight and upends his wheelchair, then something is seriously wrong and is symbolic of the setting in of a new level of racism and an emerging fascism in Israel. In this regard, the political arena in America and Israel is producing the conditions that are yielding a total disregard to ethics, morals, and a sense of irresponsibility to both the familiar and the other. David M. Gordis' words in Tikkun's online magazine are important and timely: "So, sadly, after a life and career devoted to Jewish community and Israel, I conclude that in every important way Israel has failed to realize its promise for me. A noble experiment, but a failure."
RELATED TOPICS