US presidential election: The pandering to Israel festival 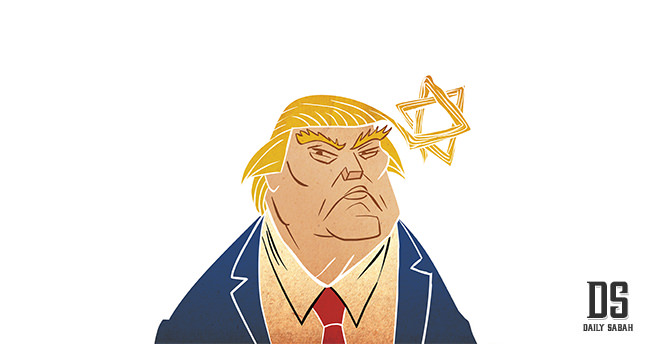 The U.S. presidential election is full of pandering to Israel in which candidates fall over themselves to rank first in the who-is-more-pro-Israel competition

On March 9, 2016, CNN hosted yet another Republican presidential debate, which had the candidates trying to outdo each other in who supports Israel more and who is ready to embrace their agenda. Pandering to Israel supporters is a full-time job for politicians in the U.S., even more so during the presidential elections every four years when candidates fall over each other to show who supports Israel's future plans more. Merriam Webster defines pandering as: "To do or provide what someone wants or demands even though it is not proper, good, or reasonable," which would be exactly the case when it comes to Israel.

The debate was a pandering fest on Israel's behalf. At one point, U.S. Senator Ted Cruz attacked Donald Trump for being neutral on the Palestine-Israel conflict. Salem Radio's Hugh Hewitt immediately jumped on the opportunity to get the pandering underway by asking Trump if he was "sort of a neutral guy" on the Palestine-Israel issue. Trump's response is indicative of the shameless cajoling taking place: "First of all, there's nobody on this stage that's more pro-Israel than I am. OK. There's nobody. I am pro-Israel … I was the grand marshal, not so long ago, of the Israel Day Parade down 5th Avenue. I've made massive contributions to Israel. I have a lot of – I have tremendous love for Israel. I happen to have a son-in-law and a daughter that are Jewish, OK? And two grandchildren that are Jewish."

Could Trump say that he is pro-African American, Latino, Chinese or Muslim in the U.S., or is it just a treatment reserved for Israel and its supporters? Trump's response was not good enough for Cruz, Senator Marco Rubio or Governor John Kasich, who all launched into a sickening barrage of pandering on top of insults heaped on the Palestinians. In the corridors of pro-Israel presidential politics, expressing neutrality is tantamount to supporting terrorism, which was exactly the framing that was pushed forth in the responses from Cruz, Rubio and Kasich.

Cruz's incoherent contradiction is so clear, yet blinding in the middle of the pandering competition since he calls for a "president who understands the national security interest" but fails to recognize that a foreign country like Israel has undermined U.S. efforts more than once. Cruz was not content with just going to bat for Israel and went a step further by offering President Abdel-Fattah el-Sissi of Egypt "as an example" of a leader that the U.S. "ought to be standing with." Here in Cruz's statement we have the ultimate pandering for Israel where we not only stand with Israeli Prime Minister Benjamin Netanyahu's dead-end and extreme right-wing government, but embrace the new bloody dictator in Egypt.

Rubio and Kasich were just as offensive in their pandering as Cruz and Trump were, but do not tell this to the Republican leadership, which is still dancing to Israeli political tunes when it comes to foreign policy. The invasion of Iraq and the ongoing attempt at demonizing Palestinians has the American Israel Political Affairs Committee's (AIPAC) and the neo-conservatives' fingerprints all over it, and politicians are pandering to the interests of a foreign state to fund their campaigns and sell the country for cheap.

The crafty pandering season always culminates with a must appearance at Israel's citadel in the U.S., AIPAC annual policy conference, to pander to an audience that is ready to provide funding for the upcoming election cycle. AIPAC's annual gathering is the Super Bowl of political pandering and is second to none on the spectrum of participants seeking the official pro-Israel stamp before the election.

The March 20-22, 2016 event, promoted by AIPAC as "the largest gathering of America's pro-Israel community," which includes a focus on groundbreaking Israeli innovations, keynote speeches from American and Israeli leaders, inspiring moments on stage and intimate educational sessions. More critically, the delegates to the policy conference experience the full scale of pro-Israel activism. The conference is a must stop for every candidate for president, Senate, the House of Representatives and governor, which regularly has an absurd level of pandering to the interests of a foreign government.

AIPAC's official website boast that "more than two-thirds of Congress, 3,600 students from more than 630 campuses" and "283 Student Government Presidents from all 50 states" will be attending this annual politically induced pandering fest. All the presidential candidates have been invited, and so far both Trump and Clinton are confirmed to attend, but I expect all the Republican candidates to punch their time card when the conference opens. Not that they need to be up to date on Israel any more than they are already, they need to qualify for more funding and possibly more staffers for their campaigns.

Kasich's statement at the debate gives a clue as to the depth of the problem of seeing U.S. foreign policy through an Israeli lens: "I don't believe there is any long-term permanent peace solution. And I think pursuing that is the wrong thing to do. I believe that every day that we can bring stability in that region by supporting the Israelis by making sure they have the weapons and the security that they need with our 100 percent backing is the way to proceed in the Middle East in regards to Israel." The key takeaway from the debate and the upcoming conference is that the U.S. political process is an Israel-occupied zone and AIPAC has been able to set the policy agenda for what is to be done in the region. Those who hope that a newly elected U.S. president will make a dent in Palestinian rights should be admitted permanently to a psychiatric hospital. Absent a fundamental shift in public opinion and a robust grassroots movement that can change the political rules of the game, newly elected officials will continue to pander non-stop to Israel supporters so as to win and keep their seats in future elections.