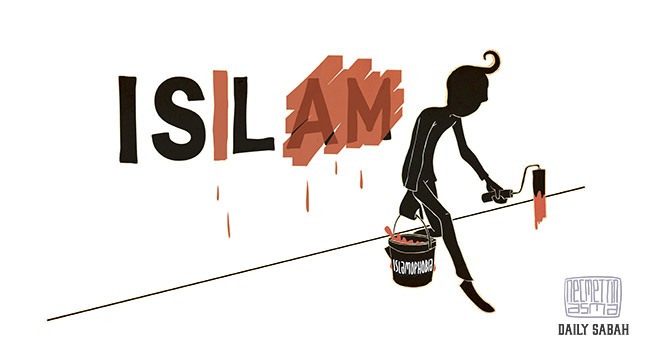 Muslims do not need a civilizational rehabilitation program to give them a sense of identity. They already have one. What they demand and expect is to be treated with dignity and respect and not to be regularly considered second-class citizens or Western citizens on probation

The end of the Cold War witnessed a shift away from the typical Russian villain to the Muslim as a threat to Western civilization that must be confronted at all costs. While the Muslim villain has been present in Western imagination for quite a long time, the contemporary reincarnation of this historically demonized and feared enemy was badly needed to keep the massive industrial complex humming. The idea of a Muslim threat as an all-encompassing peril facing Western civilization fits perfectly into an existing worldview that managed to define the self through crafting the image of the feared other.

Critically, the crafting of the all-encompassing "Muslim menace" trope translates into a never-ending intervention in the lives of Muslims at home and abroad to counter the threat as well as the deployment of a civilizational rehabilitation program, known as countering violent extremists (CVE).

At present, the CVE initiative is the standing policy of the United States with some $141 million allocated to this effort in the hope of addressing the threat. Importantly, the existing CVE program is exclusively focused on the "Muslim menace" to the exclusion of all other national, ethnic, ideological or religious groupings. The policy is constructed to say that Muslims have an embedded genetic Islam marker that causes violence if not treated through a 12-step CVE therapy program. In some communities in the U.S. and Europe, Muslims are treated as if they suffer from an acute sickness called Islam that needs daily psychiatric intervention to remedy.

Notice the lack of such CVE programs directed at various segments of American society, which accounts for 94 percent of terrorist activities as well as those responsible for some 32,000 murders and mass shootings annually. No community should accept being treated collectively as guilty for the crimes of one or a few, and that it must prove its innocence to a government that deliberately and systematically violates its civil and human rights.

The current crop of CVE experts peddle half-baked theories on extremism, orientalist imaginaries from an ignorant distant past and a clash of civilization framing ready-made conclusions to fit the needed mold. Have an idea of how to identify a Muslim extremist walking down the street? Then apply for a government grant and come down to a security training center i.e., a local mosque, near you to test your hypothesis regardless of how idiotic it might be. You think I am exaggerating? Muslim women wearing headscarves is a form of "passive terrorism" and was offered as a hypothesis by a so-called radicalization expert. Reading through the CVE literature, one surely gets the sense that the more absurd and farfetched the idea, the more likely it gets adopted.

Do not make the lack of any real knowledge, sound data or long-established research credentials stop you from making preposterous claims on how extremists are made, since all CVE ideas seem plausible when one is firmly perched on well-paid seats of ignorance. The new buzz word among CVE experts is "resilience" and how to foster it and build Muslim communities' immunity around it with a distorted set of analyses and erroneous remedies at play. What came first, the identifying of a Muslim menace or the crafting of massive interventionist polices at home and abroad?

Securitization start-ups are popping up all over the world with millions if not billions spent on supposed remedies that have no connections to reality. The world of think tanks, with not much thinking occurring inside the tanks and propelled by self-serving and self-promoting agenda, is at work producing all types of civilizational rehabilitation programs. If you have a Muslim extremist problem then let me offer you a program with social media scalability, Twitter feed management and a rapid Facebook response team to solve your problem at a cost of $1 million for the testing and deployment phases. Just make sure to use the buzz words that these think tank types know and love while hiring a supposedly recovering Muslim extremist, former Muslim or possibly the huggable type that does not bite so as to give it the needed authentic Islamic flavor.

Extremists and terrorists do exist, but the current CVE project underway is Islamophobic in nature since it approaches the problem through a religious identity prism rather than focusing on the criminal and violent intent of individuals. Monitoring mosques with informants, problematizing religiosity among youth in the community, entrapping individuals through fictitious terrorism cases and suppressing dissent on U.S. foreign policy are ideologically driven approaches that have nothing to offer in the area of security. A motley crew of charlatans, extreme clash of civilization warriors, neoconservative hacks, pro-Israel mouthpieces and not-for-profit industrial complexes are all acting as vultures in pursuit of government funding and opportunity to establish a national profile, but damned is the targeted Muslim community.

What is certain according to research is that a correlation between religious identity and violence cannot be established. Furthermore, research shows that those who commit terrorist acts have not had any direct engagement in the affairs of their community, running or operating of mosques and were highly religious until a short period before getting recruited into violent networks And, many of those who participate in violence are highly educated but have faced economic, social and cultural disenfranchisement, which have acted as a major factor in losing hope and opting to lash out, be it in Muslim majority countries or elsewhere. In reality, my own co-authored study of the Bay Area in California shows that religious identity and attachment to a mosque and community contribute to a greater level of civic engagement, volunteerism and charitable work.

The CVE offers Muslims a new approach to integration and assimilate into the melting pot, salad bowl or mosaic conceptualization, and is not sufficient. Muslims are being asked to accept integration through securitization, which boils down to the government demanding to know what undergarment Muslims wear as a precondition to equality and dignity. Integration through securitization leads to structural exclusion with a maliciously constructed perception of membership and access to civil society.

Muslims today are offered conditional and controlled access to government and civil society with CVE integration through securitization being projected as the only forum of inclusion that some in the community are so ecstatic about and ready to prostrate in a show of gratitude. At present, the cities that have been the testing grounds for CVE show an increasing lack of trust between the Muslim community and security organizations, as well as an emerging distance from government institutions and services, which is the complete opposite of what is needed to foster inclusion, equality and authentic expressions of citizenship.

Muslims do not need a civilizational rehabilitation program to give them a sense of identity. They already have one. What they demand and expect is to be treated with dignity and respect and not to be regularly considered second-class citizens or Western citizens on probation. Programs directed at addressing extremism should be unlinked from religious, ethnic, racial or cultural identity and should focus on criminal and violent intent while grounded in sound research. Lastly, the current use of CVE positing Muslims as the only specimens to be pursued preemptively for securitization is insulting and should be dispensed of immediately. Muslim communities are ready to work to protect themselves, their neighbors and societies at large because of Islamic teachings, which should be recognized and celebrated rather than problematized as a possible mental state needing psychiatric intervention.
RELATED TOPICS