Islamophobia and women in hijab in public space! 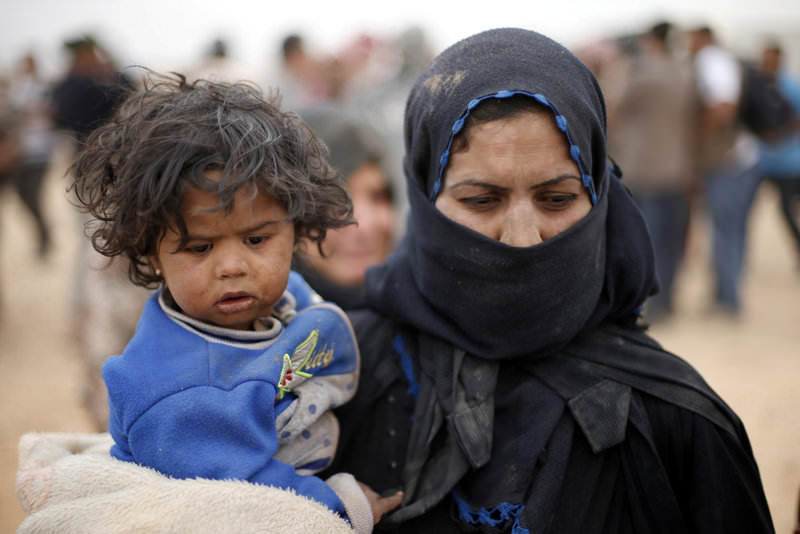 A Syrian refugee woman, stuck between the Jordanian and Syrian borders as she holds her child, waiting to cross into Jordan.
by Hatem Bazian May 06, 2016 12:00 am

A Muslim woman in hijab became the permanent target for the colonizer, the secular modernizer and currently the Islamophobic movements

Take the case of seven Muslim women wearing hijab in southern California who were escorted out of a restaurant by police officers for supposedly over-staying the eatery's 45-minute limit. The seven Muslim women are suing Urth Caffe in Laguna Beach because of this since they felt targeted due to a number of them wearing headscarves. Supposedly, the manager was expecting a busy evening and asked the group to leave despite the place having a number of empty tables and no observable mad rush for pizza was underway.

Eating while Muslim is an increasingly challenging event and more so when it involves Muslim women wearing the hijab, or headscarf. The intense campaign directed at the personhood of Muslim women in the U.S., Europe and even in some Muslim-majority countries is increasingly taking a more aggressive and violent turn. In countries like France and the Netherlands, the hijab has been at the center of debates concerning European and secular identity. European identity is increasingly being defined by what it is not and what it should not be in the future. A European identity is being created that does include Muslims as part of the in-group, and Muslim women are the symbols of not belonging to this society. The Muslim headscarf has become the rallying point for right-wing political elites who believe themselves to be the protectors of Western and European identities, and Islam, and Muslims as a group, are the threat that must be confronted.

In more than one way, Islamophobic campaigns have been undertaken with Muslim women being used as the foil to instill racist and xenophobic sentiments in European and American societies. At the same time, a similar campaign directed at the headscarf was underway for a long period of time in Turkey and other Muslim-majority countries. In Muslim-majority countries, the hijab, was the sign of anti-modernity and anti-secularism, thus the forceful removal of the piece of cloth was posited as a prerequisite to enter "real" modernity and achieve progress. It is important to recall that modernity and secularism in Muslim-majority countries was introduced during the colonial period and orientalists blamed Islam for the lack of material progress. Muslim women in hijab were problematized in the initial stages of the development of modern, Muslim nation-states, which were for the most part informed by European and American experiences of state craft.Colonial discourses and emerging Muslim nation projects circularly reinforced each other in the move toward legitimacy, and ended up problematizing Muslim women. Under colonial and distorted secular modernity, a woman wearing the hijab was not a sign of piety but the epitome of backwardness and a symbol of irrationality. For those prescribing to this view, removing the hijab was the sign of progress, modernity and rationality while keeping or promoting it was treated with scorn and hostility. Modernity and secularism in the Muslim context were conceived in the colonial womb and given birth in a distorted nation-state project that lacked a formative social contract, a real conceptualization of citizenship and the fundamental rights to be enjoyed by everyone.

A Muslim woman in hijab became the permanent target for the colonizer, the secular modernizer and currently the Islamophobic movements. Take the hijab off so as to modernize and secularize, but if you do not, then you will be forced to do it because, according to this view, Muslim women lack the capacity to know what is good for themselves. This basic, bigoted idea concerning the status of the hijab informs most of the current Islamophobic and orientalist discourses related to Muslim women who wear a head covering in public. The move from theorizing and conceptualizing modernity and secularism was swift, and a global project to civilize Muslim women by removing their headscarves was celebrated as the intellectual project of the age. All attacks on women wearing the hijab become acceptable because it was undertaken to uphold civilization and bring irrational and backward Muslims into enlightenment.

The litany of incidents involving Muslim women has no end and covers the spectrum from verbal assaults and physical intimidations to violations of personal space and snatching of headscarves from women's heads. Add to the list the more insane idea that a Muslim woman wearing the hijab represents a form of passive terrorism, which must be challenged and controlled. More than any other symbol, Muslim women's head wear garners the most extreme forms of Islamophobia from both the left and the right alike because they are defending civilization itself. Islamophobia in defense of civilization is not a vice but a virtue is the moto for the bigoted and xenophobic crowd.

Islamophobia has many manifestations, but one of its most persistent and increasingly aggressive forms is directed at Muslim women since headscarves and clothing act as visible markers. Existing data and studies on Islamophobia point to increasing levels of hostility directed at Muslim women with more violent incidents being experienced. Muslim women bear the brunt of attacks more than Muslim men who can melt into the society by wearing Western clothing and fit into the crowd. Muslim men are a type of Clark Kent in Western society while Muslim women are visible markers of Islam in public.
RELATED TOPICS