The Nakba: Narrating the ‘non-existing' Palestinians into history 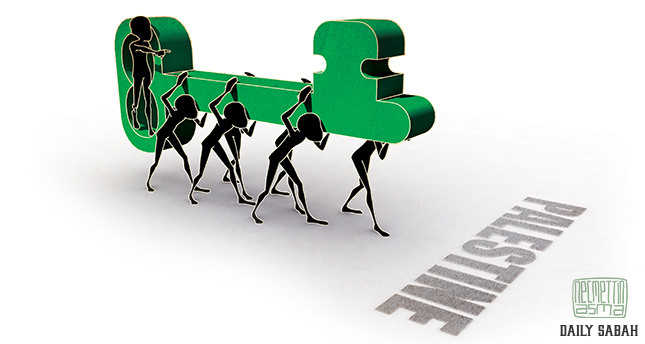 I have been engaged in a constant writing project that intends to highlight Palestinian narratives since 1948 up to the present. A narrative of dispossession touches every Palestinian family, including my own. During the 1948 Nakba and the war period, two family members on my father's side, Jawdat Ali Rida Muhammad Bazian and Imran Ali Rida Muhammad Bazian, were martyred while another relative, Rida Ali Muhammad Bazian, was tortured by the British and released to the family bleeding and unconscious in a coma. He died at home a few days later, in 1946. The Bazian's narrative is but a small part of a large picture that includes Faouzi As'ad Bazian and 14-year-old Khalid Bazian who were martyred in 1967 and 2000, respectively. The Bazian family narrative includes the dean of prisoners, 'Alaa Bazian, a blind man endowed with a piercing vision for freedom and resistance and a towering figure in the prisoners' movement. On my mother's side of the family, my uncle Yusuf went missing during the war and until this day no one knows what happened to him.

Every Palestinian family has had one or more of its members killed, wounded, imprisoned or expelled either first by the British and or by the Zionists during the 1947-48 Nakba.

On a daily basis, I receive hundreds of requests via email, Facebook and Twitter to highlight a cause, an important issue or a silenced narrative that can benefit by adding one more badly needed voice. Being a Palestinian in the diaspora and an academic that works on Palestine and its painful history adds a personal dimension to requests coming from people living under occupation. How can someone narrate the stories of so many victims past and present? How can the past be recorded when the present Israeli death machine is currently adding more bodies and countless victims daily?

Narrating Palestinian means to write back into history the names, faces and stories of all those who were killed, maimed, wounded and dispossessed to bring Israel into existence. The names of the Palestinians killed are not recorded; they are mere numbers mentioned in passing as though without families, mothers, fathers, brothers, sisters, cousins or neighbors who recall their joys and sorrows. Palestinian bodies have been piling up since the beginning of the 20th century with Europe's plan to solve its "Jewish question" by creating a Palestinian-Arab one.

Palestinians have been facing structured, multi-layered and systematic erasure at local, regional and global levels. Locally, they suffer under direct and brutal Israeli occupation with daily attempts at dispossession and never-ending violence. The visible scars are etched into people's faces speaking of trans-generational sufferings. Young Palestinians are made old by the suffocation of occupation, dispossession of land, checkpoints and fascist settlers stomping over everything that has meaning including the human itself. The Nakba continues in the form of the Apartheid Wall that separates families and villages, and pollutes the senses with a most profound ugliness that has no contemporary parallel on earth.

Yet more painful for Palestinians is the never-ending disfigurement of the land since 1948 and erasure of the past to be replaced with an architecture of violence, destruction of meaning and a "spirituality" rooted the worship of power as the new modern deity. Adding insult to injury on the anniversary of the Nakba is a Palestinian Authority that acts as the face and hands of the occupation, protecting the settlers while punishing again its own population. How to narrate the multiple stories of betrayal and the acquisition of VIP privileges for the few, gained by selling the rights of others?

Western press is silent for Palestinians

The anniversary of the Palestinian Nakba is again ushered in with a continuation of structured violence committed against the Palestinians by the Israeli State. In Western press, the custom is to look at events in Palestine through the Israeli lens. On the one hand, the press erases past and present Palestinian narratives while on the other, humanizes and rationalizes Zionist violence. A Palestinian is either murdered or violently attacked daily but the Western press rarely finds the time or space to narrate their story and give a name, face and complete picture to who they are as a person. Palestinian deaths and suffering is narrated in numbers while their victimizers are introduced as people with feelings, families and histories that matter.

At a regional level, the Nakba for Palestinians has transformed them into refugees and tools for settling accounts between various Arab states and leaders. Consequently, whenever two Arab countries had a conflict, the Palestinians became the bargaining chip to exert pressure or gain the upper hand in whichever distorted sense of nationalism was being introduced. Also, the Nakba transformed Palestinians into stateless people and subjects of states that have accepted their dispossession as a pre-condition to gaining their own post-colonial banana republics. Palestinians post Nakba became a regional toy to raise, abase and bundle in all types of Cold War machinations, monarchies versus nationalist goals, Sunni-Shia rivalry, oil market manipulations and war on terror obfuscation. How to narrate the violence of regional intrigues that makes Palestinian refugees an instrument of state craft?

On the global level, the Nakba has meant that the Palestinians have become wards of the international community. Importantly, the international community as a group celebrates Zionism and the founding of Israel as atonement for their own historical anti-Semitism and the death visited upon European Jewry during WWII. The Nakba meant that Palestinians have become a fixture at United Nation meetings and a never-ending spectacle for obtuse foreign policy "experts" to offer ideas on how to solve the unsolvable. How to solve the Palestinian dilemma in an institution and among member states that consent to Palestine's dispossession, provide economic and military aid to Israel, cooperate in targeting Palestinians around the world and cast a veto to prevent any change from taking place?

Narrating Palestine is the order of the day and it has to be undertaken under the cruelest of circumstances. How to narrate the Nakba when Afghanistan, Syria, Iraq, Libya, Egypt, Myanmar, Yemen and Somalia are all ablaze and facing various levels of death and destruction? Arguably, the Nakba could be seen as a minor issue in the face of the destruction currently under way in Syria and Iraq, which is of biblical proportions. However, the level of destruction should not obscure the nature of the Zionist settler colonial project and its connection and investment in the on-going regional conflicts.

The alliance between Israel, Saudi Arabia and Egypt takes place within the framework of a regional containment strategy that made Syria and Iraq the acceptable terrain to settle strategic accounts. Palestine and Palestinians are once again the bargaining chip to be offered to safeguard seats of power in various capitals and Israel is in the driver seat to secure its land robberies.

The Nakba is not a single event that unfolded in the past from which Palestinians have had a long period of time to recover from. The Nakba for Palestinians is a never-ending epic that continues to shape their daily lives. The stories of dispossession are continuous and trans-generational in nature since the losses and destruction inflicted upon Palestinians in 1948 has for them been followed by constant dislocation, targeting and movement as refugees in near and distant places. Israel was built upon Palestinian graves and a wholesale robbery of Palestine's cities, villages and orchards. What started in the 1948 Nakba continues today in land confiscations, settlement building and the suffocating occupation that has no end in sight.

A narrative of every Palestinian family is intertwined with the 1948 Nakba, 1967 Nakhsa, 1970 expulsion from Jordan; the 1976-80s multiple wars in Lebanon and a new exile in Tunisia, the first and second Intifadah, the 1991-92 removal from Kuwait, ejection from Iraq and wards of U.S. occupation forces; the siege in Yarmouk and camps in Syria, the sadistic assaults on Gaza. The Nakba rears its ugly head every time a Palestinian is stopped at a border and in airports to be incessantly asked about violence, terrorism and why are they traveling in the first place, as if it is a crime. How does it feel to be asked to justify your existence and innocence to the criminal enterprise that committed the crime in the first place?

The Nakba is Zionism's trans-historical bullet that is lodged deeply into Palestinian bodies and minds, continues to torment daily and works to negate Palestinian peoplehood, history, their connection to the land and the ability to narrate itself. Narrating the Nakba is writing Palestine and its people back into history while asserting their centrality to the past, present and future. The Nakba continues in the daily humiliation suffered by Palestinians inside and outside of Palestine and the building of the Apartheid Wall that separate families and villages, and pollutes the senses with a most profound ugliness that has no contemporary parallel on earth. Lastly, narrating Palestine is not complete without the thousands of Palestinians who languish in Israeli, Arab and world prisons for no other reason than demanding freedom and dignity. Certainly, a prison may lock-up the body but it never can capture the mind of a free people.