Could Trump win the White House? 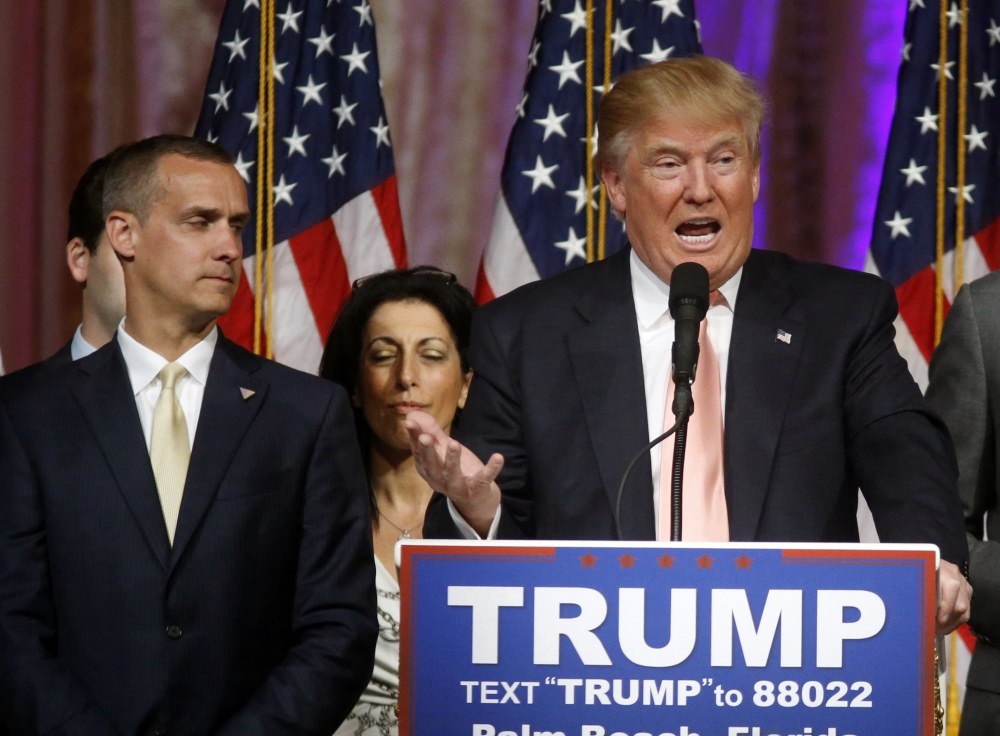 Donald Trump, the presumptive Republican nominee in the race for the White House, continues to grapple with controversies about his relationship with women and his refusal to release his tax returns.
by Hatem Bazian May 19, 2016 12:00 am

Presumptive republican presidential nominee Donald Trump exploiting xenophobia to win the presidency is not farfetched. Economic policies that adress the needs of the poor and provide a boost to the economy may just allow the Democratic nominee to win over Trump

The Republican Party primaries are slowly winding down with Donald Trump the clear presumptive nominee. Certainly, the Republican establishment is trying to find a way to thwart the possibility of Trump's nomination, nevertheless all indications point to his name at the top of the ticket in the presidential election. Assuming the clear evidence of a nomination and the Republican establishment lining up behind Trump, could he win the general election? More importantly, how could Trump possibly win considering his high unfavorability among women, African-Americans, Latinos and minorities in general?

Trump's road to the needed 270 electoral votes is more difficult than the one for potential Democratic candidate Hilary Clinton. The U.S. electoral map favors Democrats and the road to the White House is a much more difficult path for Republicans. In the 2012 elections, President Barack Obama was able to secure 332 electoral votes, which was a decisive Democratic victory. At present, the electoral map shows the Democrats with an advantage of 247 votes in states that lean strongly in their direction while the Republicans count 206. The national map favors Democrats heading into the November presidential election, and key battle states will determine the next occupant of the White House.

The key battle states for the November election will be Ohio, Pennsylvania, Florida, Colorado and Wisconsin and possibly Michigan. For any Republican to have a chance to make it to the White House come November, a combination of victories in these states is a must. If the Democrats are able to secure Florida then game over and they win the White House. Also, if the Democrats win Ohio and another state while losing Florida they still end up in the White House. So, what needs to happen for Trump to win the needed 270 electoral votes?

Certainly, the Republican primaries, and Trump in particular, mobilized and brought to the polls a flood of new voters, but the question is if it is sufficient to win the general election where the battle lines between the two parties move to the center. Trump has managed to rewrite the rules of campaigning with his unconventional approach, shooting from the hip and his readiness to switch positions on a dime. Apart from few one-liners on the campaign trail, Trump is a trademark and a media sideshow that is running for the presidency and the existing rules of campaigning have no relevance whatsoever.

Trump's road to the White House hinges on high turnout among white, working-class men in key battleground states with the hope that their wives, daughters and sisters might be convinced to vote the same way as them. Indeed, Trump does not need to win a majority of white women's votes, but if he can make a good showing it might help close the gap somewhat. In the key battleground states that witnessed massive losses of manufacturing and assembly line jobs, Trump is hoping not only to get Republican votes but also to influence working-class Democrats to cross the line and vote on the basis of racial-economic identity.

By problematizing immigration and blaming Latino immigrants for taking away white, working-class jobs, Trump is hoping Democrats come to his side and cause a shift in America's Rust Belt and vote Republican. Combine Trump's appeal to white voters with a sophisticated Republican voter suppression strategy targeting African-Americans and Latinos, then the possibility of winning the battleground states might become a reality. Low voter turnout among minorities coupled with an increased turnout among Republican voters in battleground states as well as a shift from working-class, white Democrats in support of Trump might be the needed ticket to the White House.

Another element that might have an impact on the outcome is the selection of the running-mate that will join Trump on the ballot. If Trump selects a woman or a Hispanic as his vice presidential running-mate then it might cause additional shifts in key states that were counted for the Democrats and might solidify others that were on the edge. Certainly, the possibility of a divided Republican Party is still in the cards, but if Trump's nomination holds and a unified campaign emerges then adding a Hispanic or a woman might influence segments of the electorate that were not in play prior to this choice. What I am saying is that a Trump victory is not an impossibility like many think. Race matters in U.S. elections, and sharpening racial and xenophobic tensions has carried politicians into seats of power in the past. Trump fits this mold and the possibility of him reaching the White House is not farfetched. Hoping that people will exercise better judgment in the aftermath of hard economic times is both naive and foolish. Stopping Trump from reaching the White House requires a strategy that focuses on peeling away at his white, working-class base. The only way to accomplish this is to offer a real economic plan that can serve as an alternative to Trump's easily packaged racism and xenophobia.
RELATED TOPICS