Targeting Chinese-Americans is an old ploy! 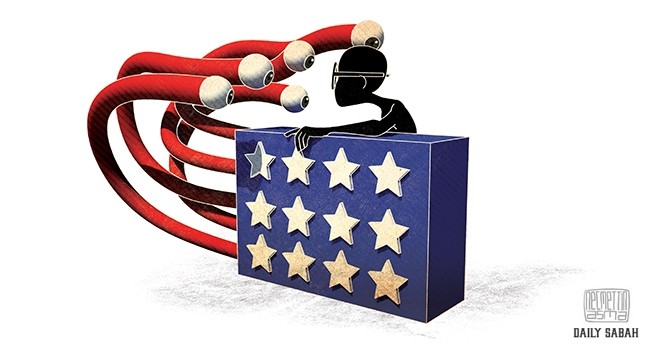 Illustration by Necmettin Asma - twitter.com/necmettinasma
by Hatem Bazian May 26, 2016 12:00 am

The deep-rooted structural racism in the American society today has hit Chinese citizens living on the continent. They are all kept under the watchful eye of American paranoia accusing them of espionage

In December 1999, a grand jury charged Wen Ho Lee, a Taiwanese-American scientist, with espionage and passing secrets to the Chinese government about the U.S. nuclear W88 program. From the charges and the media frenzy generated by it, one would have expected that the government had a mountain of evidence against this very accomplished scientist. Alas, the government had no evidence connecting Wen Ho Lee to any spying activities and eventually had to drop the case and agree to pay a $1.6 million settlement for this wrongful persecution and will-fully leaking his name to the press that participated in character assassination.

Immediately after being arrested, Wen Ho Lee was placed in solitary confinement for nine months and denied basic legal protection under the law. The mere filing of charges was sufficient for the government to treat him as guilty despite the lack of any evidence of espionage. A February 2001 article in The New York Times described the confluence of unrelated issues that brought the case against Lee forward: "The case of Wen Ho Lee was propelled by the divisive politics of Clinton-era Washington. It languished for several years, only to be revived in 1998 by a confluence of forces -- a White House under siege of impeachment, festering accusations of Chinese money funneled to Democratic campaigns and a House panel that saw the W-88 case as only the newest evidence of China's voracious appetite for American technology secrets." In-deed, targeting Wen Ho Lee had more to do with the atmosphere in Washington and the partisan fights between Democrats and Republicans than any real espionage.

What is most alarming being that Wen Ho Lee's case is not the only one. For the past 20 years and possibly even longer, the U.S. government has made it a point to target Chinese-American scientists and charge a number of them with scientific and industrial espionage. The charges against Wen Ho Lee is one such case and the intensity of government actions were further influenced by the events of 9/11, which made security the top and only priority. The cases brought by the government were made into a major media event and a public spectacle during the arrest and initial reading of the list of charges.

The U.S. government did not learn a lesson from the Wen Ho Lee case and continues to target Chinese-American scientists through fictitious espionage charges. Recently, four Chinese-American scientists faced a similar avalanche of espionage charges and were placed under arrest: Guoqing Cao, Shuyu Li, Sherry Chen, and Xiaoxing Xi. The four American citizens "were widely labeled as spies for China before the government dropped all their charges with no explanation, apology, or compensation."

In each of the cases above, government actions were based on flimsy evidence and a spectacle intended more for media and public consumption rather than securing national industrial secrets. As debates on the economy and weakening U.S. competitiveness in the global market heated up, Chinese-Americas became an easy target to shift the blame from the real causes of the 2008 re-cession. This can be easily witnessed in the bullying rhetoric of Trump, who is content in accusing China for the economic weakness that has befallen the U.S. More importantly, Trump uses China as the springboard to cast himself and the American society as victims of a Chinese cheating conspiracy, including accusations of stealing corporate secrets.

The blame China canard has become a catch-all justification for everything that went wrong in the U.S. economy and the remedies offered harken back to the darker days of the Chinese Exclusionary Act. What we are witnessing today is another cycle of racially motivated blame directed at minorities, and in the case of Chinese-Americans, it is through the lens of espionage and the long-standing stereotyping of the community on the basis of lack of trust and under-handed business strategies. By constantly amplifying the supposed Chinese espionage conspiracy, corporate America and political elites can have their cake and eat it too since on the one hand they destroyed and undermined the economy through their unvarnished greed and 30 years of outsourcing manufacturing jobs. On the other hand, the same corrupted elite ride into town with shotguns in hand to protect the already dispossessed poor and working class American from the supposed Chinese cheaters who are weakening the society. The filthy rich first manage to destroy the poor and working class financially then move to annihilate their moral and ethical values by stoking them into racism against similarly dispossessed communities of color.

In this regard, the history of Chinese-Americans is filled with painful episodes and moments of triumph after long struggles to achieve equality and acceptance in America. From the first moment of arrival in America during the Gold Rush and the building of the railroads, Chinese-American men and women have been subject to differentiated and discriminatory treatment resulting in constantly facing a precarious legal status in the society. The ebb and flow of regional and national economic conditions often resulted in the intensification of hostilities, discrimination and otherization directed at Chinese-Americans, who got blamed for whatever went wrong in the economy. Consequently, and as a result of the difficult and harsh recession of the 1873-79, Chinese-Americans were chosen as the convenient target for a rising tide of nativists and xenophobic political elite that successfully stoked white working class anger and resentment to gain advantages in election cycles.

At present, we are facing a similar campaign after the 2008 recession and the targets include Chinese-Americans on the espionage front, Latino populations on the basis of illegal immigration, African-Americans on social welfare and crime and Muslim Americans on terrorism and security. Clearly, the way forward is to counter these targeting strategies by building a coalition on the basis of a different and inclusive political agenda and vision that examines the real causes for economic instability and weakness and offering real remedies that are not rooted in racism, xenophobia, Islamophobia and to dispense of, once and for all, the anti-Chinese sentiments.
Last Update: May 26, 2016 2:02 am
RELATED TOPICS