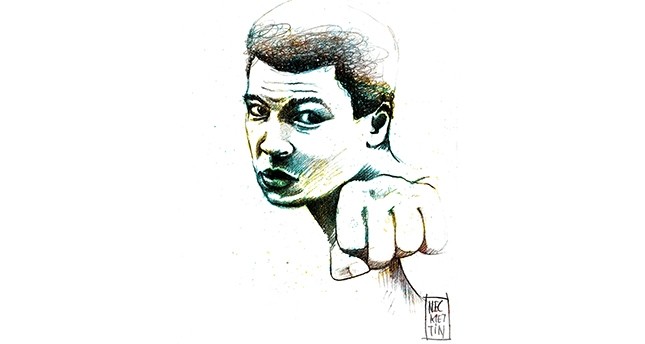 Muhammad Ali managed to transcend boxing and made the world his ring and managed to communicate with all people in a language they all understood: The language of love, justice, dignity and wit the like of which, possibly, will never be seen again

Oct. 29, 1974: Muhammad Ali vs. George Foreman; "The Rumble in the Jungle" boxing match was my distant connection to the champ, the greatest. The match was a much-awaited event for the neighborhood and almost everyone crammed into the few houses that had a TV set to watch the fight. Every household had 40 or 50 people packed in front of the small-screen TV waiting for the event to start and not wanting to miss the minute that Muhammad Ali entered the ring. Muhammad Ali was not Arab nor a Palestinian, but everyone on that day and even before then considered him as "one of our own." He was a real hero who spoke and identified with the pain and suffering inflicted on African-Americans, expressed solidarity with the "third world" and risked everything to give a voice to the voiceless.

As the bout was about to start, the streets got empty, cafes were deserted since none had a TV at the time, and almost everyone found a place to watch and pray that Muhammad Ali would win another match for the world at a critical period in history. As the decisive knock-out occurred in the eighth round, you could hear the cheers coming like a roar across town and throngs of people came out in the street calling "Ali, Ali, Ali," as if he was present among them. Kids came out of the houses replaying the fight, pretending to be Ali, an occurrence that was repeated nonstop for days.

Starting at age 10 and going to school as children, Muhammad Ali's photos and cut-outs from magazines were ever-present adorning the covers and the inside of our books and notebooks. Had social media been around at the time, Ali would have been the king of the medium and his image and quotes would have been the most shared.

On the world stage, Muhammad Ali was the people's champ regardless of what anyone said or if the title was taken away by government action. In so many different ways, Ali in the ring and at every turn represented the hopes, dreams and aspirations of a globe that was torn asunder by the Vietnam War, civil rights struggle in the U.S., anti-colonial liberation movement in Africa and Asia and, for us closer to home, the ongoing dispossession of the Palestinians. Muhammad Ali managed to transcend boxing and made the world his ring and managed to communicate with all people in a language they all understood: The language of love, justice, dignity and wit the like of which, possibly, will never be seen again.

Muhammad Ali masterfully was able to connect the fight for civil rights in America with transnational liberation struggles and anti-colonial movements across the globe. For many across the world, Ali's actions and words provided a window through which they were able to see America's racism and contradictions. Muhammad Ali was a child of segregation but refused to accept the limitations imposed by America's racial system. Ali proclaimed, "I am America. I am the part you won't recognize. But get used to me. Black, confident, cocky; my name, not yours; my religion, not yours; my goals, my own; get used to me."

The draft for the Vietnam War served as the stage that elevated Muhammad Ali to a global, household name and transformed him from a beloved heavyweight champion of the world into America's most despised figure. Muhammad Ali's refusal to be drafted was a watershed moment for the U.S. government and the anti-war movement. "I ain't got no quarrel with the VietCong... No VietCong ever called me nigger," was Ali's response to the draft. Furthermore, in his opposition to the draft and the war, Ali connected his opposition to the racism at home: "Why should they ask me to put on a uniform and go 10,000 miles from home and drop bombs and bullets on brown people in Vietnam while so-called Negro people in Louisville are treated like dogs and denied simple human rights?"

Ali stood high above everyone by giving up everything to stand for his principles and refused to join the war efforts in Vietnam. At the height of his career and with the opportunity to accept being drafted and possibly function as recruitment poster child for the war, Ali opted to go to jail, lose his title and through it challenge the government and the country on the unjust nature of the war and the ongoing racism against African-Americans.

The passing of Muhammad Ali is a sad moment for everyone and is the loss of a giant, the greatest, the like of which we will never see again. The world is comforted to have had the privilege to share this planet with Muhammad Ali for so many years and the legacy that he leaves behind will continue to inspire generations to come. What Muhammad Ali faced in the 1960s and '70s is still around as U.S. military interventions around the world continue and racism is ever present in today's America. The best way to honor Muhammad Ali's legacy is to renew our commitment to end wars and interventions abroad and forcefully bring an end to racism. Ali's words on racism is a must-read and a powerful reminder if any is needed: "Hating people because of their color is wrong. And it doesn't matter which color does the hating. It's just plain wrong."
RELATED TOPICS