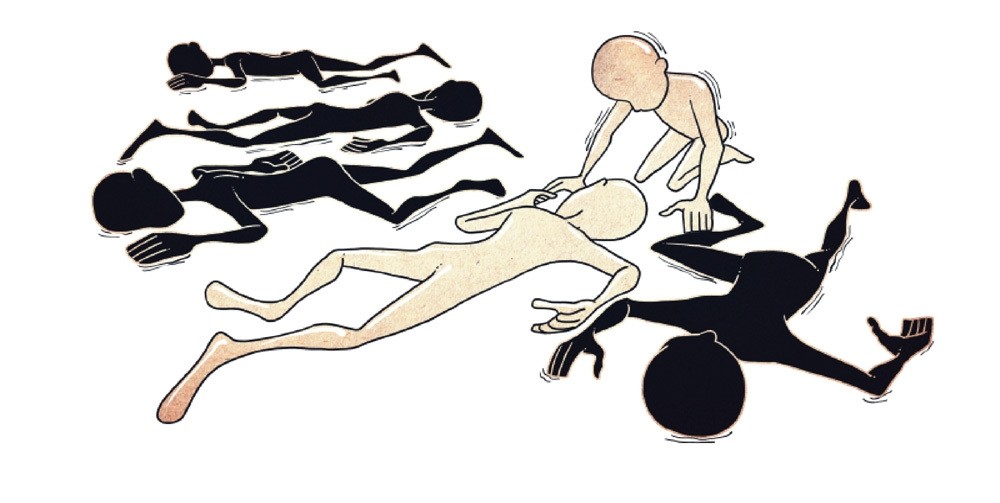 Illustration by Necmettin Asma - twitter.com/necmettinasma
by Hatem Bazian Oct 14, 2016 12:00 am

Bringing an end to police killings and mistreatment of African-American and minority communities is a long and difficult process for sure, but it is not helped by the penchant of civil society leaders and politicians to engage in compounded racism that rationalizes and blames the victims

The spike in killing of unarmed African-Americans by police officers is directly related to historical and long-term endemic problems, all of which are now easily broadcast through the utilization of cameras and social media. Instead of seeing this as a drastic increase in cases, the public should focus on police violence and abuse that has been ongoing for a long period of time. Academic research empirically shows that police violence and abuse directed at the African-American community is directly race related. The emergence and ease of technology has made it possible to put a face and context to what has been common practice across the country, and only now are we privileged to see it on social media.

A number of deep-seated stereotypical, racist and implicitly biased views of African-American communities work within a highly racialized and structured American imagination to inform and regulate the perception and response to police violence. The American racial imagination explains these killings through a simple stereotypical association of African-Americans deaths to existing high-crime areas, possible drug dealing, criminal intent, possession of weapons and the blanket cause of resisting arrest. Even among otherwise educated people, knee-jerk responses based on existing racial imagery reproduce the same justifications and rationalizations that are not only racist but also totally false.Here, we have to make a distinction between simple racism and the phenomenon of compounded racism, which goes beyond the simple kind and into a deeper level that assigns blame to the victims of racism for being victimized and locating the causalities in something internal to the African-American community. Simple racism is bad enough, but the compounded and sophisticated type works to parcel out the supposed criminal or societal "disease" present in the African-American community to justify or rationalize ongoing and disproportionate police killings and structural racism.

Multiple academic and professionally published research papers on the subject of police violence show that racial bias is the primary cause behind the differentiated treatment accorded to African-American communities. In a detailed summary of 18 national studies of police and racial bias, Kia Makarechi concluded, "Taken together, the research paints a picture of a nation where a citizen's race may well affect their experience with police - whether an encounter ends with a traffic stop, the use of police force, or a fatal shooting."

A study by professor Cody T. Ross, a UC Davis anthropologist cited by Makarechi, found "evidence of a significant bias in the killing of unarmed black Americans relative to unarmed white Americans, in that the probability of being black, unarmed, and shot by police is about 3.49 times the probability of being white, unarmed, and shot by police on average." What was more interesting in the study: "There is no relationship between county-level racial bias in police shootings and crime rates (even race-specific crime rates), meaning that the racial bias observed in police shootings in this data set is not explainable as a response to local-level crime rates."The study makes an association between police killings and the race of victims, but often people respond that more white individuals are killed by police annually than African-Americans or Latinos. Certainly, the raw numbers are correct, but it is a flawed measurement if not adjusted and balanced to population percentages. An article published by the Washington Post adjusted the police killing data to population size with "nearly 160 million more white people in America than there are black people" and constituting "roughly 62 percent of the U.S. population but only about 49 percent of those who are killed by police officers." On the other hand, "African Americans ... account for 24 percent of those fatally shot and killed by the police despite being just 13 percent of the U.S. population." The Post's study concluded, "Black Americans are 2.5 times as likely as white Americans to be shot and killed by police officers."

In the same Post study, 2015 data show: "Police have shot and killed a young black man (ages 18 to 29) -such as Michael Brown in Ferguson, Mo. - 175 times since January 2015; 24 of them were unarmed. Over that same period, police have shot and killed 172 young white men, 18 of whom were unarmed. Once again, while in raw numbers there were similar totals of white and black victims, blacks were killed at rates disproportionate to their percentage of the U.S. population. Of all of the unarmed people shot and killed by police in 2015, 40 percent of them were black men, even though black men make up just 6 percent of the nation's population."

Demagogues like former New York City Mayor Rudy Giuliani argued: "If you want to deal with this on the black side, you've got to teach your children to be respectful to the police, and you've got to teach your children that the real danger to them is not the police; the real danger to them, 99 out of 100 times, 9,900 out of 10,000 times, are other black kids who are going to kill them. That's the way they're gonna die." This assertion of black-on-black violence is used to rationalize and excuse police violence. Certainly, data shows that black-on-black violence accounts for 90 percent of murders in the African-American community but also white-on-white violence is responsible for 82 percent of the killing of whites. Taking this racist logic a step further, the overwhelming majority of pedophilia and serial killers come from within the white community in America but no one frames it as a white issue or white crime, rather, as it should be, it is considered on a case-by-case basis and no collective race guilt is assigned.

A Wall Street Journal article by Heather Mac Donald pushed the same association of crime areas and police violence by insisting, "Such a concentration of criminal violence in minority communities means that officers will be disproportionately confronting armed and often resisting suspects in those communities, raising officers' own risk of using lethal force." Just as Giuliani pivoted to black-on-black violence, Donald Trump shifts toward problematizing minority communities thus affirming and appealing to America's existing racial imagery of these communities. The above two assertions and other lines of argumentation are a clear example of the compounded and sophisticated type of racism.

The notion that high-crime areas or threats posed by supposedly armed African-Americans is used to gloss over the flimsy evidence to back these assertions. The research shows, "The use of lethal force by police in 2015 found no correlation between the level of violent crime in an area and that area's police killing rates." To put it another way, 69 percent of African-Americans killed by police in 2015 were non-violent and unarmed, which trumps the assertion that crime or presence of arms or lethal threat was the cause of the shooting. A study published by the Center for Policing Equity, which looked at 19,000 cases of police use-of-force from 2010-2015 found, "African-Americans are far more likely than whites and other groups to be the victims of use of force by the police, even when racial disparities in crime are taken into account." Another important study, "Protecting Whiteness: White Phenotypic Racial Stereotypicality Reduces Police Use of Force," conducted in 2016 by a team from Harvard, Portland State University, U.C.L.A., and Boston University wanted to test the hypothesis of whether "the Whiter one appears, the more the suspect will be protected from police force." The team's findings were that the "police used less force with highly stereotypical Whites, and this protective effect was stronger than the effect for non-Whites."

The national debate on police violence and use of force against African-Americans should be totally reframed away from association with the supposed criminal background or the high-crime area. The existing research cited above and other studies undermine claims of area association or criminal behavior, which brings us back to race as the primary differentiating factor that explains the propensity of police to frequently use lethal force when encountering African-Americans. Bringing an end to police killings and mistreatment of African-American and minority communities is a long and difficult process for sure, but it is not helped by the penchant of civil society leaders and politicians to engage in compounded racism that rationalizes and blames the victims.
RELATED TOPICS