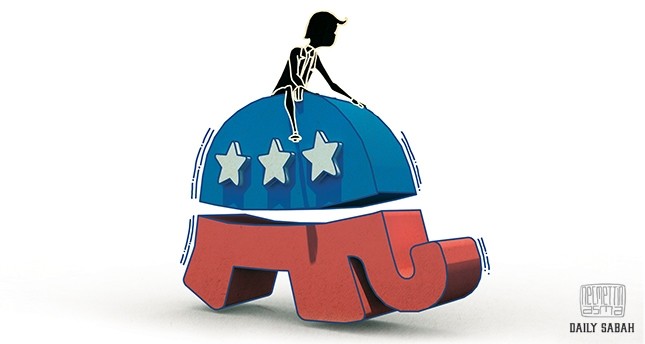 This is America's Brexit moment where Islamaphobia, anti-immigrant and nativist sentiments were masterfully mobilized for a Trump victory

Thousands of articles have been written and many more will be written concerning the 2016 presidential election and the bizarre nature of the contest. Under normal circumstances and had the Republican candidate been anyone other than Donald Trump, Hillary Clinton might have been able to secure the White House for the Democrats. The elections are already behind us and Trump managed to win the presidency and hand the White House to the Republicans for the next four years. Researchers and political scientists alike will pour over the results to understand the outcome so as to draw lessons for the next round in the 2018 midterm election.

Trump and his campaign focused on the one issue that made a difference in the election, the failure of Washington's political establishment to protect the working and middle class whites. At times Trump managed to hit the needed populist cords to mobilize the disaffected voters to support his campaign but just as frequently and sometimes in the same sentence taking a detour into racism, xenophobia, Islamophobia and misogyny. Trump was able to channel the anger across the country by pointing to the need to "drain the swamp" in Washington and bring about change.

Trump spoke of opposition to the Iraq war, continued U.S. spending on NATO and protection of countries that can afford to pay for their own security, which were themes that resonated with the disaffected working class. The election themes centered on the viability of continued intervention abroad, the destructive effects of the neo-liberal economic order and globalization. The two candidates in the 2016 presidential election had one of the highest negative ratings in America's political history but voters opted to support an anti-establishment outsider rather than support a career politician.

Critically, the American electorate had considerable angst going into this election cycle with ghosts of failure on the domestic and foreign policy fronts casting a deep shadow on the country's future. On the foreign policy front, the Bush administration's decision to invade Iraq continues to haunt America's political elite, which voted and supported a preemptive war based on false or fabricated pretexts. The Iraq invasion has cost the country dearly in blood and treasure with the consequences still unfolding daily. Who is responsible for dragging the country into war?

Often, the simple answer is given that it was George W. Bush who took the country to war but in reality Washington's political elite was all on board with the invasion, while Congresswoman Barbara Lee was the one lone no vote in the U.S. congress to oppose the resolution authorizing the invasion. The neo-conservative wing of the Republicans pushed for the war and managed to secure the support of the democratic party, including then New York Senator Clinton. The Iraq war, America's intervention and military deployment across the world have contributed to the massive debt and the ballooning of the federal deficit.

At the same time, the massive globalization, deregulations, neo-liberal economics and outsourcing of jobs have caused massive disruption in cities and towns across America. Responsibility for this economic disaster is shared equally between both parties that acted in unison to support this pernicious and invasive capitalism. Shifting jobs overseas and destroying the manufacturing sector in the U.S. translated into prolonged structural damage to the economy and created permanent unemployment among a large segment of the population.

The economic collapse of 2008 did not help matters either and the rescue package given to corporate American and the banking sector left a deep scar in the minds of many people. Many across the country saw their life savings disappear and millions lost their homes and businesses but the government rewarded the banks and corporations who caused the financial problem in the first place. Americans expected their government to protect them and not to reward those who harmed the country. The banks acted with malice in the financial sector and wrote loans and leveraged the economy in ways that the regular person had no capacity to understand let alone being asked afterward to dig deeper to rescue these massive corporations. Too big to fail meant the regular person, the middle class and all tax payers had to carry the big and surely irresponsible banking industry.

Yes, jobs and the economy rebounded from the 2008 financial disaster but the growth and benefits again went to the top 1 percent and the bottom continued to experience stagnation and increased costs across the board. The combination of the foreign intervention and financial collapse are at the root of the current dissatisfaction with the government and the lack of trust of the political elite.

Yet, what was most problematic in Trump's campaign is that he attacked the people that had no role in the crisis in the first place and left those responsible off the hook. Furthermore, the few advisers that worked with him belong to the same camp that pressed for the Iraq war, pushed for deregulations and privatizations. A populist campaign stoking white anger and directing it at minorities rather than those who actually caused the economic damage at home and intervention abroad. The American voter anger is validly directed at the ruling class that continue to push for an open-ended military intervention and unrestrained support for corporate interests and banking industry. However, Trump's campaign managed to package this anger into racist soundbites and maliciously directed a steady stream of venom at minorities.

Trump's victory will stand as America's Brexit moment where Islamophobia, anti-immigrant and nativist sentiments got masterfully mobilized to win an election. The coming four years are going to be very difficult for the American Muslim community and Islamophobia will be given an extended lease of life, which will be coming from the highest office in the land, and directly from the White House.
RELATED TOPICS