American Muslims and the specter of fear 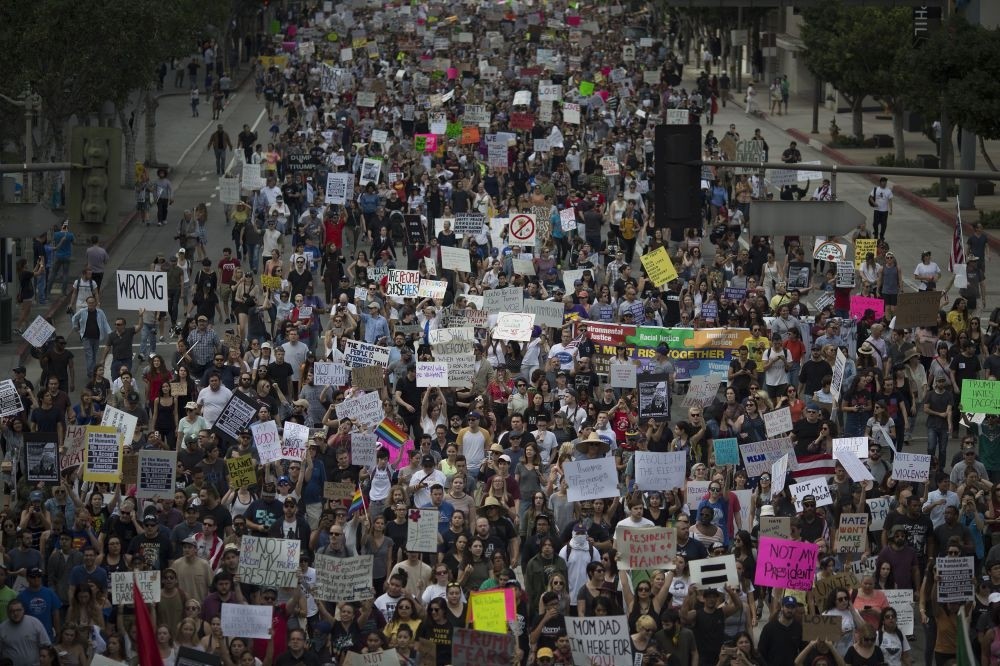 Thousands of protesters marching in reaction to the election of Republican Donald Trump, Nov. 12, 2016 in Los Angeles, California.
by Hatem Bazian Nov 25, 2016 12:00 am

This is not the time to hide away and withdraw from civil society out of fear. The American Muslim community as a whole must develop a united front in the days ahead in the Trump era

The election of Donald Trump in the recent U.S. election has unleashed a wave of fear among Muslims and communities of color across the country. After my class today, a friend asked if the conditions in the country are going to become more difficult, for example, if an interment like the Japanese faced during World War II might be on the horizon for Muslims. In addition, the friend mentioned that a number of individuals are thinking about leaving the country and seeking safer places considering the increasing number of attacks directed at Muslim women in particular.

Since Trump's election, an estimated 700 hate crime cases have been recorded around the U.S., the majority of which were directed at Muslims. For purpose of accuracy, a number of attacks were directed at supporters of Trump, but those cases represent a very small number and are isolated. Trump's surprise victory gave rise to a rash of attacks directed at Muslim communities as well as Muslim students on college campuses, which police reports indicate were hate motivated.

The election results have been followed by an ongoing debate centered on creating a Muslim registry. Some from the Trump transition team have argued that the precedent of Japanese Internment during World War II provides the legal justification for such a policy. It has been lost on those who are using the Japanese Internment as a valid model that the late President Reagan and Congress expressed an apology for what took place and admitted it was an error that should not be repeated again. In reality, the Japanese Internment stands as the darkest chapter in America's legal history, and the fact that the Supreme Court upheld the right of the government to intern Japanese added to the level wrongness that was done to some 120,000 innocent individuals.

Immediately after the September 11 attacks, the Justice Department did institute a mandatory registration for individuals from 26 countries - 25 Muslim-majority countries and North Korea - in an effort to secure the country from sleeper cells. The policy was met with national and global condemnation as well as legal challenges from civil rights organizations, which caused the Bush administration to reverse course and terminate the program. Aside from the negative press, the program had no basis in sound security policies or existing counterterrorism strategies; rather, the whole approach was mobilized by a deepening national sense of paranoia and a leadership that wanted to give the impression that it was addressing existing security gaps.

Here, the issue is not that the new administration will not target the American Muslim community; it already said that much during the campaign and all indications point toward putting forth such policies as soon as they take office. The real crisis is that the American Muslim community lacks a coherent and sustainable national strategy to counter and resist the incoming barrage of discriminatory policies. The specter of fear has over taken the community and rational judgement is already in short supply.

The observation from late South African leader Nelson Mandela is very insightful for the American Muslim community: "I learned that courage was not the absence of fear, but the triumph over it. The brave man [woman] is not he who does not feel afraid, but he who conquers that fear." Certainly, fear is legitimate for the American Muslim community and no one is saying that it should not be the case, but it should not translate into a sense of hopelessness that leads to despair.

American Muslims should take stock of Trump's election, conduct research, collect the needed data and then get moving to plan for a sustained response. The planning for the 2018 mid-term elections should start immediately with an eye toward shifting the power in congress, and it is doable if the right strategies are deployed. At the same time, a robust legal infrastructure needs to be put in place so as to be ready to respond when discriminatory policies are enacted by the new administration. Furthermore, the American Muslim community should develop the widest civil rights coalition with communities that will be adversely affected by the new administration and a set of principles should be adopted to guide the work moving forward.

Lastly and most importantly, this is not the time to hide away and withdraw from civil society out of fear. The American Muslim community as a whole must develop a united front in the days ahead and set aside tactical differences to pursue the strategic goals for the empowerment of the community. It is tempting for one group or another to seek its own deal, negotiate access, form narrow coalitions and take the road of least resistance, however success will only come as a result of developing the much-needed united front. All Muslims are targets and no such thing as a good or bad Muslim should be allowed to take hold in the days ahead. American Muslims are good and no one should be asked to prove their innocence for being a member of this community and a person of faith. As a community of faith, let's only fear God and seek His guidance as we work with like-minded people to heal the world through manifest acts of justice that are built on mercy.
RELATED TOPICS