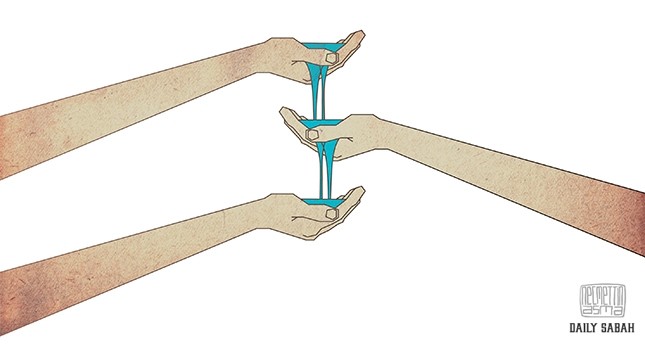 In a number of verses, the Quran uses the term, trade based or established on contentment of the parties involved in the transaction. The term "contentment" appears in various places in the Quran and the overall imparting of a positive outlook. Here, I am interested in the specific framing and association of trade and contentment in the verse, which I maintain is an important distinctive feature related to Islamic epistemology of commerce and economic activities in the market. Often, the question is asked concerning Islamic economics, is it capitalist, socialist, communist or a combination thereof? The question is an important one on its own and needs sustained engagement but one can't delve into it without first taking a step back and putting forth an Islamic epistemology that can ground the discussion.

One cannot navigate or begin to understand the Quranic call for a "trade based on contentment" without an Islamic epistemology to provide a real essence to the commercial transaction that goes beyond the scope of the written contract and the material. It must be emphasized that the point of departure for Islamic economics is the metaphysical first and foremost and then afterward we enter into the contingent reality of the material so as to facilitate the "normal patterns" of human life and all inhabitants of the universe. Certainly, capitalism, communism and socialism are ways to assess and regulate the relationship between the contingently real of the material world and the human with no questions or real consequences entertained beyond the here and now.

A contract in Islamic epistemology cannot be reduced to the here and now or the mere savvy legal articulation of terms since at the core of the tradition is the idea that we all will face a day of reckoning and God will be the real and only accountant in charge. Here, one must distinguish between the enforcability of the contracts, even the one written by savvy legal minds, in the material world versus the real accounting of the moral and ethical contents of the contracts in the metaphysical world – these two are not equal and not the same.

We have become accustomed to peeling the here and now from its metaphysical foundation and locate all human thought and action in the purely material and worldly legal. Certainly, when examining certain aspects of Islamic economics, one can find common frames of reference that are sometime identical articulations that might fit perfectly into capitalist, communist, socialist or even anarchist conceptualizations. However, the similarities, I am afraid, are only in the outward form or sometimes it is a pure Muslim imitation that is dressed up in Islamic legal garb that confuses the distinctive nature of the tradition and the metaphysics of its economics.

Increasingly and across various parts of the Muslim world, Islamic economics has been reduced to a mere reproduction of the global capitalist models. The effort gets dressed up in Islamic terminology and some are apt at creating a harmonizing textual bridge through the use of various tools to make a seamless adoption. On the other hand, and just as utilitarian, a conceptualization of a socialist type of Islamic economics undertakes a similar textual construction project to rationalize a metaphysically hollow economic project.

I am certain that Islamic text has enough materials to permit any set of individuals to construct a worldly economic edifice that masquerade as being divinely sanctioned and metaphysically constituted. How to construct and conceptualize an Islamic economic model that takes as a point of departure an affirmation of the metaphysical foundation of the world? For most in the established field of economics, the one that only measures the relations to the purely material world, such a question does not even belong in the field of economics and should be dealt with in the fields of philosophy, religion or possibly a course on mythology. Economics is too important of a field to entertain such notions as the metaphysics of commercial engagement, and to contemplate responsibilities beyond the age of contract and the here and now.

Historically, economics was not divorced from philosophy, religion, law or ethics as evidenced in the writings of Greek philosophers like Plato, Aristotle and the Roman writers like Cicero, and Vergil or in the Islamic tradition itself in the works of Ibn Khaldun, Al-Ghazali and Ibn Rushd. The problems around economics have been reduced to knowledge of the technical aspects of it, market analysis, taxation, supply and demand, and reading of all types of data and graphs, rather than the deeper and more important philosophical questions behind all that which we do in the world.

The "smart" in the economic field will study supply and demand, labor cost as well as price fluctuation then offer a solution to move jobs to a distant place that offers the cheapest per hour cost of production. Often, the companies will dress-up this shifting of jobs in some high purpose and make the point that they are helping a distant poor country. Certainly, and from a very narrow lens, one can see the immediate results for x thousands of workers but the over-all effect will produce a much more prolonged poverty and also cause the loss of jobs for those who had them in the company's home country in the first place. Let's ask the question about outsourcing the jobs, does a company have a moral responsibility to its employees knowing that the only factor that motivated the move away is to drive a higher profit margin? More importantly and as often has been the case, the quality tends to be diminished by outsourcing, which raises another moral and ethical question about a merchant or a company knowingly putting inferior products in the marker for no other reason than to have a higher profit margin.

I can ask and put forth many more questions but the core problem in economic behavior and also much of the analysis is the constant absence of a metaphysical lens through which to measure all of human conduct in the world. A prophetic tradition states, "an honest merchant will be ingathered in judgement day with the prophets." The Quranic verse if taken together with the hadith gives us epistemological foundation for Islamic economics. Here, Islamic economics and commercial engagement in this world is centered on paving the way to secure the real profit by being in the company of the prophets. In this sublime aspiration is the metaphysical foundation for Islamic economics.
Last Update: Mar 21, 2017 2:20 pm
RELATED TOPICS