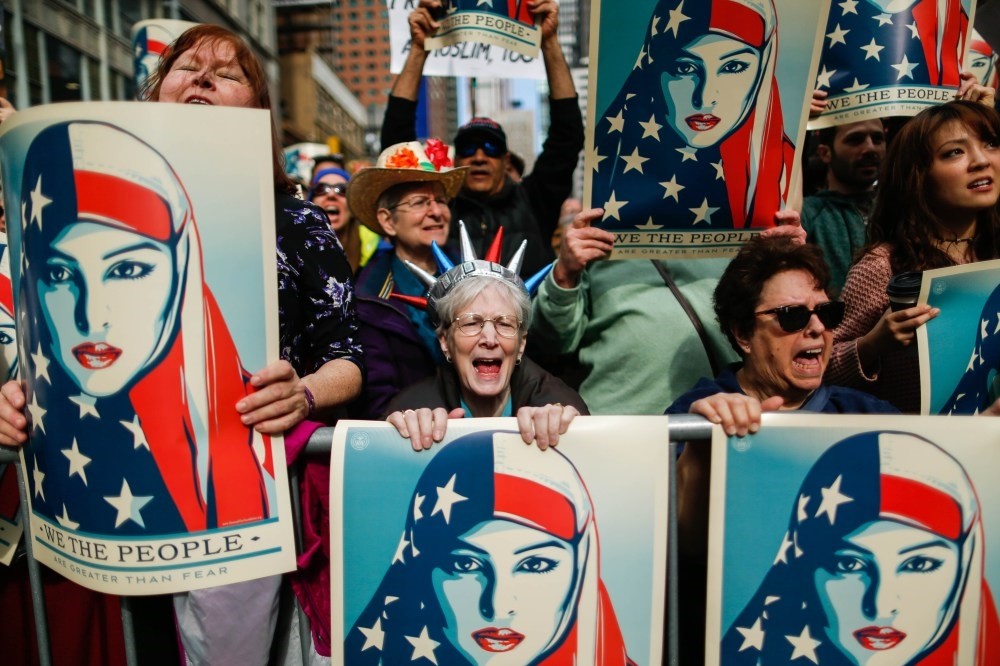 As Trump's Islamophobes in the White House insist on demonizing and reducing Muslims to a single frame, that of terrorism, the broader American society has begun to reject this racist framing

U.S. President Donald Trump's administration is issuing yet another Muslim travel ban targeting seven Muslim majority countries on the basis of religious identity. Do not let the White House press statement fool you, it is a Muslim ban, no matter what the spin doctors say. The factually challenged president and the administration's alternative-facts brigade maintain that this is not a religiously based ban, it does not target Muslims and is only intended to secure the country from the threat of terrorism. White House rhetoric demonizing Muslims, immigrants, refugees and minorities have already had negative impacts with daily bigoted attacks, threats and cases of murder directed at Muslim individuals or those who look Muslim and institutions around the country. On a weekly basis, a mosque or a Muslim institution is being firebombed or attacked.

Banning Muslim entry into the country had divergent responses from various segments of the American public. Trump's alt-right and right-wing supporters were jubilant for the ban while the mainstream Republicans, Democrats, liberals and progressives expressed opposition, and thousands mobilized at airports to express solidarity with those stranded at ports of entry. Indeed, a noticeable titanic political shift is under way and the divergent responses point to a possible reconfiguration of public discourse around Islam and Muslims. The Trump administration had to recalibrate its response and jump ahead of a fast-derailing train.

In an effort to deflect the criticism, Trump's White House through a number of spokespersons stated that these countries have been identified by the Obama administration as being a threat, thus it is nothing new and only a matter of instituting extreme vetting to prevent terrorists from coming into the country. On the one hand, it is interesting to see Trump adopting a policy from the Obama administration and using it as the basis of his own policy. Someone must find this ironic considering Trump's diligent work at delegitimizing Obama through the birther movement and in the lead up to the election. On the other, does it imply that Trump's administration doesn't believe that Islam is "at war" with America and Giuliani's admission that the president asked him how to do a Muslim ban "legally." Trump's anti-Muslim rhetoric and worldview began much earlier than the signing of the executive order to ban Muslims from coming into the U.S. and can be traced to his vehement opposition through the birther movement to President Obama as early as the 2008 elections.

Everyone around the globe understands this to be a Muslim ban and no amount of spin doctoring can alter this reality. Interestingly enough, Trump, who is known for not backing down on issues even after they are clearly and factually wrong (inauguration numbers), is trying to have it both ways by constantly speaking of an Islamic threat and then sending his doctors to say that it is not a ban directed at Muslims. How to reconcile these two will have to be left to the alternative facts squad!

In reality, the Muslim ban is part of a more comprehensive Islamophobic agenda that is at the center of the current administration purported effort to fight the war on terrorism. More broadly, the White House is a din of the Islamophobic fringe that slithered its way into halls of power by combining a toxic mixture of extreme bigotry toward Muslims, refugees, immigrants and all minorities with a deep rooted conspiratorial worldview. Demonizing Muslims was an easy prod used as an instrument to foment fear and drive bigotry into a fever pitch during the election cycle and then monetized into votes at the ballot box.

The current occupants in the White House have some valid concerns on a number of critical issues facing the country but bringing the alt-right and White Nationalism into seats of power will lead to a disaster. Here, the attacks on immigrants, refugees and Muslims are part of sophisticated distraction campaign while a total alt-right takeover is underway at key governmental institutions. I am not implying that the racism, xenophobia and targeting of minorities is not central components to the alt-right agenda — it is — but pushing these forward in the early stage created the needed distraction while Steve Bannon moved swiftly to reshape the administration on the basis of his own worldview. The country is in for a very rough ride with Steve Bannon and the alt-right at the helm and a president who is glued to the TV, wıth fingers on Twitter and a penchant for seamlessly blending reality showmanship with national security agenda.

Consequently, the response to Trump's and the alt-right's agenda has manifested itself in the massive mobilization in streets across the country and court challenges. Trump's a president that lost the popular vote by some 3 million votes, was helped in the campaign by a sophisticated Russian intelligence hacking operation and lacking in depth made for a rapid response from a majority of Americans. The low approval rating is indicative of the rejection of Trumpism by a majority of Americans but this is not sufficient to make an impact considering the alignment of power in Washington these days.

On the more positive tip, titanic shifts are underway for the American Muslim community. The shift was caused by Trump's targeting of this faith community during the election campaign and continuing the onslaught after making it into the White House. Recently, White House spokesperson Sean Spicer was asked a question about Islamophobia and xenophobia and his answer: "I think that the President, in terms of his desire to combat radical Islamic terrorism — he understands that people who want to express a peaceful position have every right in our constitution. But if you come here or want to express views that seek to do our country, our people harm, he's going to fight it aggressively whether it's domestic acts that are going on here, or attempts through people abroad to come into this country. So there's a big difference between preventing attacks and making sure that we keep this country safe, so there is no loss of life, and allowing people to express themselves in accordance with our first amendment. Those are two very, very different, different things." The answer to the question plays well to Trump's base but it is not sufficient to govern and formulate a sustainable public policy.

More importantly, as Trump's din of Islamophobes in the White House insist on demonizing and reducing Muslims to one frame, that of terrorism, the broader American society has begun to reject this racist framing. Over the past few months, we are witnessing large segments of the American public embracing the American Muslim community and bringing it into the center of the mainstream as well as rallying to support its constitutional and civil rights. In the days and months ahead, a clear agenda must be developed that can transform the titanic popular shift into a sustainable political and electoral strategy that evict the alt-right and the "fake-news" President from the White House and send them packing. The 2018 midterm election is the appointed date for transforming the titanic shift into seats of power in Congress, Senate, governorship races and state houses across the country. How this will come about is the difficult work ahead but Muslims are at the hub of mainstream political discourse and more visible today than before the arrival of Trump and the alt-right to the White House.
RELATED TOPICS