The Ottomans and the loss of Jerusalem 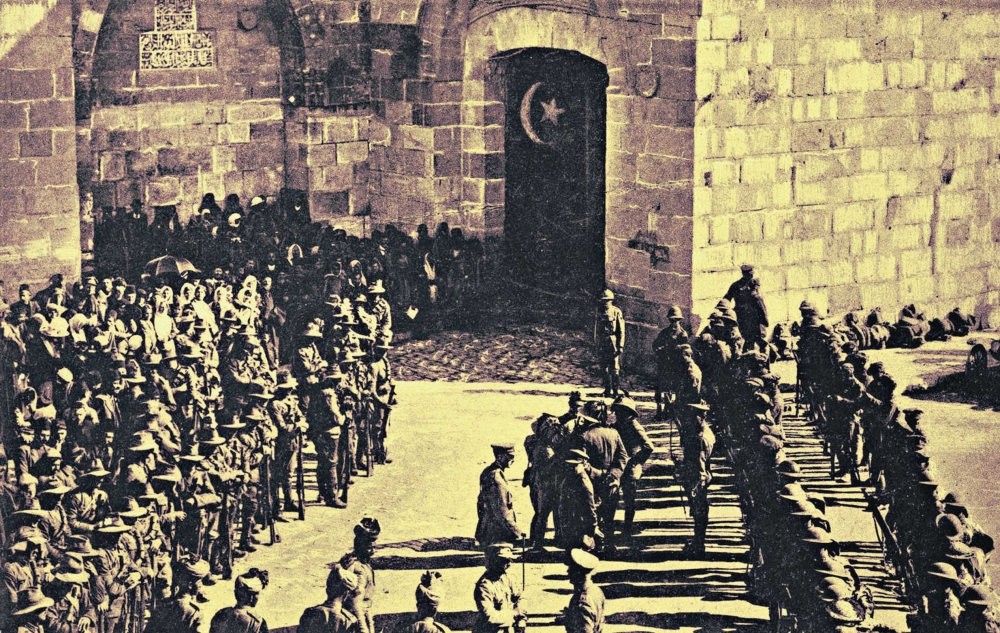 Edmund Allenby, the first British viscount who led the British invasion of Palestine in WWI and captured Jerusalem Dec. 9, 1917, seen entering the Old City with his troops.
by Hatem Bazian Jun 22, 2017 12:00 am

As we commemorate the anniversary of World War I and the Balfour Declaration, it is important to reflect on Ottoman history and their relationship to Jerusalem. The Ottomans represented the last cohesive Islamic political system to exercise unfettered governance over Jerusalem, and it was during their collapse that Palestine became occupied first by the British and then to be handed to the Zionist. It is important to point out that the Ottomans, in their last days, were contemporaries with the birth of Zionism and had interactions with it – an important point to be covered later in this editorial. Palestine and Jerusalem's encounter with the Ottomans was an affair that lasted some 400 years, during which, the area experienced both the splendor of power and the agony of defeat.

THE FIRST OTTOMAN RULE OF PALESTINE

During Sultan Yavuz Selim's reign, the Ottoman forces took possession of Palestine peacefully after a military campaign in Syria around 922 Hijri or 1516 CE. Entering Jerusalem, Sultan Selim first visited the graves of all the Prophets buried in the area, along with many other sacred locations around the city. Upon hearing the news of Selim's victory, the elders and leaders from the surrounding cities came to greet the Sultan and presented him with the keys of their cities and castles, as a sign of recognition of his newly minted authority over the region. Sultan Selim did not stay long in Jerusalem, but before he left the city, the community celebrated the occasion with a feast that was held in the courtyard of the Al-Aqsa mosque.

After Sultan Selim's death, his son, Sultan Suleiman the Magnificent, inherited the throne. In Sultan Suleiman's reign, Palestine experienced reinvigoration through massive Ottoman contributions, which included rebuilding Jerusalem and its surroundings. The present wall of the old city was rebuilt over a five-year period; buildings were renovated and reservoirs were constructed to serve the local population and pilgrims traveling in the area. Al-Aqsa mosque experienced a facelift, which included construction of new walls and the installation of new doors, such as the door of Our Lady Maryam. The Dome of the Rock was rebuilt with new floors and the internal artwork on the dome was redone. The Dome of the Rock was further renovated by Sultan Mehmet III (1597), Sultan Ahmed I (1603), and Sultan Mustafa I (1617). Another mosque inside the courtyard, Jaami' Al-Hanaabilah, was also renovated by the Ottomans in 1611.

Sultan Suleiman's wife, Rukhsana, established a large waqf (foundation), which included the Munif mosque, a building that had a large kitchen to feed the poor, 55 rooms for residence of the darawish and the virtuous people, and a big market connected to it. In addition, some 30 villages and farms were set aside to support the waqf and all the employees needed to run it. Also, a school was set up by Sultan Suleiman in Haarat al-Waad in Jerusalem to provide students from the city with a primary level of education.

An account of Jerusalem appears in the "Seyahatname" of the Turkish traveler, Evliya Çelebi, who visited the city in 1672, and described it as follows:

"Jerusalem has plenty of buildings. Its air is fresh and its water is sweet… [governor] Zade Mehmet Pasha counted the inhabitants of the city. They numbered 46,000. The Pasha distributed the Surra to no less than one thousand men, mostly friends, and sufis… Jerusalem has 43,000 vineyards, and every Jerusalemite lives in these vineyards two to three months a year."

From the first moment of rule over Bilad al-Sham, the Ottomans treated Palestine as a special territory possessing a sacred character. In a study of the Ottoman Muhimme defterleri, Dr. K. J. Asali maintains that the Ottoman "firmans and orders show the great attention given by the authorities to the sanctuaries." In addition, Dr. Asali discovered that the "wardens and other employees," hired by the Ottomans to oversee the sanctuaries, "had to be pious and reliable," which was the way to maintain the high status of these sites. Every Ottoman ruler without exception made certain that Bilad al-Sham, in general, and Jerusalem, in particular, received the attention, and was given the favor of his administration. This attention manifested itself in numerous ways, but the most visible aspect was the yearly financial allowance (Surra) sent for distribution among the scholars, imams and the poor in Jerusalem and other cities in Palestine. In addition, many Sultans established schools and Sufi lodges, and set aside income derived from waqf properties. Ottoman waqf properties set aside by various Sultans in and around Jerusalem and Palestine became a prominent feature of religious life in Palestine and regularly supported thousands of families in the region.

While the above might represent the Ottomans at the pinnacle of their power, one cannot deny the attention given to Jerusalem and Palestine by successive Sultans all the way up to the end. The decline of the Ottoman power was a slow process with multifaceted causes that culminated in the eventual dissolution of the state and the severing of its vast territories, including the occupation of Palestine. Here, it is historically important to point out that external aggression played an important role in weakening the Ottomans, but more critically was the internal dynamics that contributed to the success of external enemies. The internal factors included corruption, nepotism, heavy taxation and fragmentation, which further contributed to the dissolution. At the critical juncture of World War I, the elites in parts of the Arab and Muslim world aligned themselves with European powers, attempting to incubate a colonially constructed modern nation-state at the expense of the Ottomans. The internal factors and alignment made it possible for British and French troops to land at the shore unchallenged and to be welcomed by elites upon entry to Palestine and Bilad al-Sham.

Here, I am not attempting to settle accounts and point out those who aligned with colonialism and those who did not, but to refocus and give a clearer view of Ottoman relations to Jerusalem and Palestine. In the waning years of the Ottomans, European powers sought penetration into Bilad al-Sham and Egypt with a colonization project in mind. If anything, the groundwork for the occupation of Palestine and Jerusalem had begun in the 19th century and culminated in the first part of the 20th century. Zionist activities in Palestine went through numerous European surrogates to lay the foundation for a settler colonial state, which meant that weakening the Ottomans was a critical part of the strategy.

SULTAN ABDÜLHAMİD'S EFFORTS FOR THE REGION

The Zionist movement had its eyes on a piece of the Ottoman pie and worked to acquire it through their machinations and collusion with both internal and external forces. In reality, the Zionists attempted to purchase Palestine from Sultan Abdülhamid II by sending him an offer in this regard. Herzl, the founder of the World Zionist Organization, wrote in his diaries about the offer, and Sultan Abdülhamid's refusal of such an offer. Sultan Abdülhamid's statement to Herzl then, stands as an accurate description of what has transpired: "I cannot give away any of it. Let the [Zionist] save their billions. When my empire is partitioned, they may get Palestine for nothing. But only our corpse will be divided. I will not agree to vivisection."

In a subsequent letter from exile addressed to Shaykh Abu Shammat, Sultan Abdülhamid provided the reason for his removal from office: "I abandoned the Islamic Caliphate for one reason and one reason only which I now set forth: because I did not accept the establishment by the Jews of a national homeland in Palestine within the 'Ard al-Muqaddas [holy land]." From both Herzl's diaries and Abdülhamid's own letter, we can deduce that the Sultan had a sense of Ottoman and Islamic history, and the grave consequences associated with accepting the offer. Whatever one thinks of the Ottomans and Sultan Abdülhamid II particularly, one must accept the undisputed fact that the loss of Palestine and Jerusalem rests at the hands of those who aligned themselves with British and French forces in the hope of getting a piece of the pie. Well, the pie turned out to be a very poisonous one, and the dismantling of the Ottomans brought neither dignity nor independence to those who struck a devilish deal with the colonial powers.