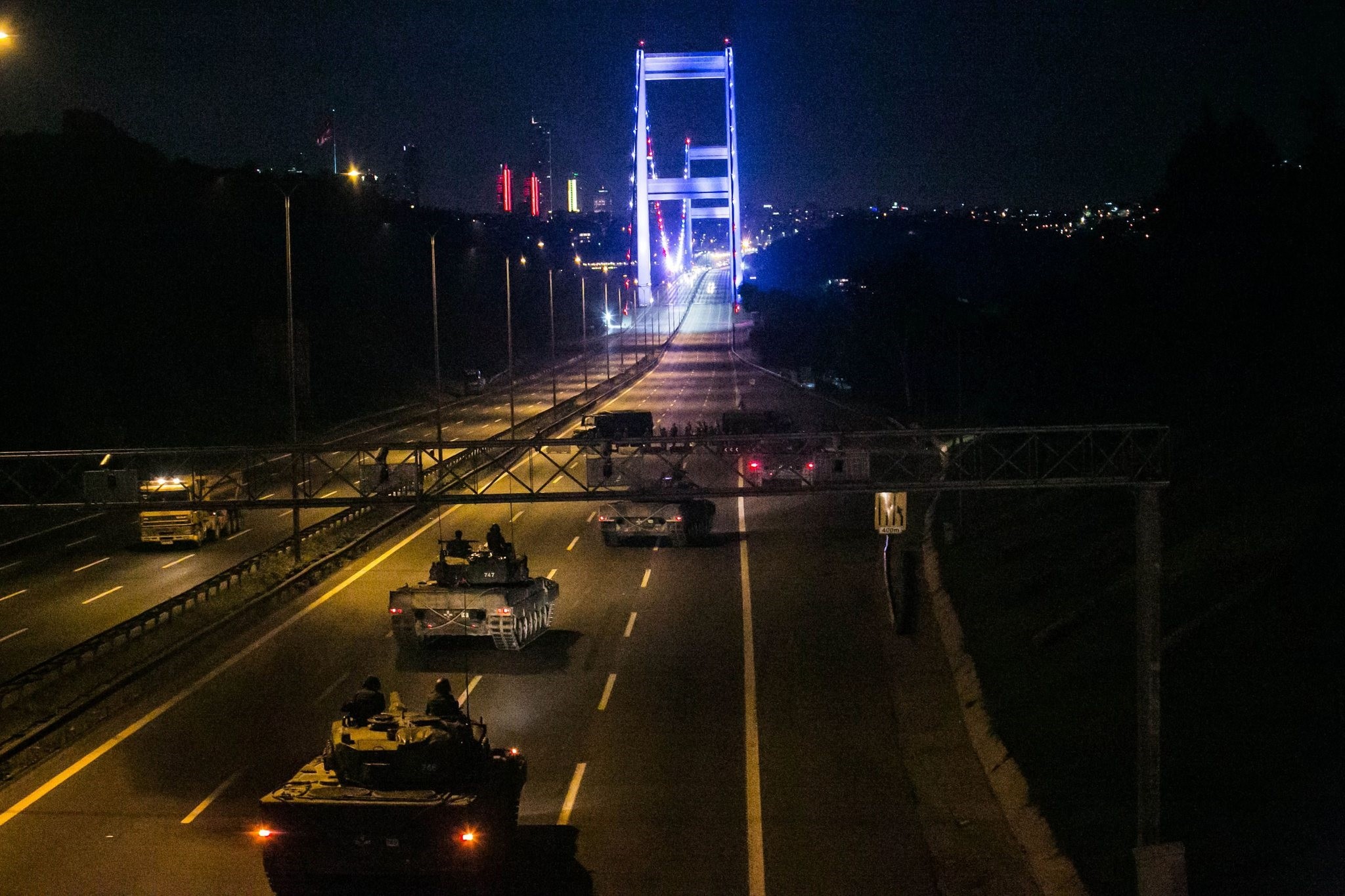 The 2016 failed military coup attempt in Turkey is paradigmatic of the post-colonial world system whereby internal political processes are structured to maintain and reproduce external interventions and dependencies. Clearly, the attempted coup in Turkey was not the first, as the short history of the Republic of Turkey aptly demonstrates. Yet, the more critical question to be asked is why coups are the norm in the post-colonial Global South and what purpose do they serve to bolster internal forces that are aligned with external economic, political and strategic interests?

The anniversary of the coup is as good a time as any to highlight and critique the structural aspects that reproduce military coups and interventions to "protect the state" or a version of "secularism" from the people's democratic choices. To understand how a military coup occurs in the postcolonial period, one must examine the development of subservient elites before, during and after the colonial period. The ruling elites in the Global South were incubated, educated and nurtured to see themselves as an extension of the colonial master and are assigned a custodian role over "modernity" and "progressive" scientific/rational developments in the colonies.

Here, the idea of inferiority of the colonial subject is made operable through the incubated and nurtured elites, who, as a group, were set to administer the colony for the benefit of the colonial motherland. If we understand colonization as a system of control and domination that encompasses all aspects of society and structured around an epistemology that is transferred to the constituted colonized elite to administer the colony then we begin to understand military coups in general. This does not mean that internal rivalries between segments of the elites don't occur or that external factors are operating in isolation, rather the over-all colonial structure instrumentalize existing tribal, ethnic, religious, class, gender and linguistic cleavages to maximize control and domination.

Beginning of the indirect colonizationThere is an important argument that must be understood before delving any further into this topic. It is a fact that Turkey itself did not experience direct colonization, which is an accurate statement, but nevertheless a Eurocentric and intellectually colonized elite was forged during the late Ottoman period. This elite viewed itself in similar terms to those societies that experienced direct colonization. The problem arises when we view colonization narrowly and not connect it directly to the hegemonic discourses rooted in the Eurocentric thought, which were embedded into systems of knowledge production and introduced with the "new and innovative" educational, economic and political projects across many parts of the world, including Ottoman territories.

Starting in late 18th century and continuing well into the 20th one, a new Turkish elite was forged and educated in a totally alien epistemology, which in time led to a sizable segment that viewed itself through Eurocentric eyes. Everything in the "East" was given negative attributes, while the "West" was described using positive and progressive terms. One should not assume that late Ottoman history did not have internal contradictions, it did but these were magnified and deepened with the adoption of the Eurocentric epistemology. Certainly, the educational and intellectual system was designed to alienate the society from its epistemological roots. In due time, the newly emergent and intellectually colonized elite produced economic, educational, political and social institutions that set in motion the process of internal transformation of the state and all its machinery.

The new elite was assigned – or, more accurately, it embodied - the European colonial attitude of being a custodian over the lives and future of the "backward" societies to usher-in a civilizational project. In this context, the colonized elites of the global south acted to cement the colonial structure through using an "indigenous" facade, but acting to further external interests. Being given the needed tools by colonial powers and trained in modern modes of control, the role of this intellectually colonized elite is to constantly intervene to prevent any change in the political, social, economic and educational colonially designed structures.

The colonialized elites continued to reproduce themselves even after the colonial period came to an end, by sending their children and grandchildren to study in the same colonial mother lands. Here, we must not separate the colonial from the post-colonial in terms of the epistemology and the constructed worldview since it remained founded on colonial and inferior terms. Time and again, the post-colonial period witnessed interventions by these elites through unleashing military coups to supposedly "rescue" the nation from an impending evil or a deep crisis. All along, the crisis to be prevented was no more than an attempt to assert real independence and sovereignty in the post-colonial period.

In Turkish modern history, the coups and military interventions were carried out to prevent and "rescue" the nation and maintain a steady march toward the elusive true "democratization" project. Democracy had to be rescued from itself and military coups were the instrument of choice in the postcolonial period. Considering the long and intense efforts at undermining the independence and sovereignty of the military institution itself starting in late 18th century during the Ottoman Empire and continued to the most recent past, the military coup strategy is intended to weaken the strength of the society and grant the external colonial mediator a privileged re-entry into dictating the affairs of the ex-colony.

The claim from Western powers is that they need to guide the democratic process, the adherence to the law and the protection of human rights in Turkey, all important matters that deserve attention from every leader and government (on a side note, these high ideals and recommendations should have been kept in mind before invading Iraq and Afghanistan and setting-up torture centers around the globe). However, Western powers have supported one military coup after another, not only in Turkey but across the Global South, always aligning their interests with military dictatorship and massive human rights violations. The intervention and support of the military coup is intended to maintain the same sphere of influence and control over existing elites and prevent a change or assertion of independence and sovereignty from taking hold in Turkey or any global south postcolonial state.

An important question is what actions Turkey's government had taken that brought the country into the recent military coup machinations.

I will offer three possible scenarios that illustrate the shift that occurred in the worldview of Turkish governing elite, moving the military coup engine forward. First, the Turkish government and parliament's decision to not support the U.S. invasion of Iraq and prohibit the use of its territory to launch attacks was a significant assertion of independence and sovereignty. The U.S. and NATO expected the Turkish State to fall in line and grant them unconditional support in the operations against Iraq. This was not the case, and the decision to reject the request moved the needle toward a future military coup.

Second, the Turkish government's decision to confront Israel over Gaza's siege, successive military campaigns and the killing of ten Turkish aid workers on the Mavi Marmara in the effort to break the blockade. In many ways, the targeting of Turkish ruling elite can be traced more concretely to this foreign policy decision and for taking Israel to task on its massive human rights violations against the Palestinians. Postcolonial ruling elites in the Arab and Muslim world understand and are trained to adhere to the constructed boundaries when it comes to disputes with Israel, which involves never pushing further than statements of condemnation and letters to the U.N. to express displeasure. Here, Western powers are mobilized to protect their Zionist project and every post-colonial Arab and Muslim world order leader understands and is conditioned to never go outside the constructed safe zone of solidarity with the Palestinians. Turkey's decision to confront Israel brought the coup a step closer since the new elite was not playing by the old colonial rules of the game.

Third, the Turkish state decision to align itself with the hopes and aspiration of the Arab Spring and the support for the new wave of democratically elected governments moved the coup clock closer. While many different narratives around the Arab Spring are circulating, the basic fact is that the Arabs who mobilized in the streets did so out of a genuine desire to achieve dignity, justice and freedom after a long period of oppression. The fact that other agendas and external forces acted to derail it should not confuse us with the real impetus behind it and the not yet completed project for de-colonization. Western powers and their regional allies moved to re-constitute the old order and used a combination of resource infusion and regional disruption to bring back the military dictators they so much love as instruments of control and stability in the Global South. Turkey's decision to oppose the effort and not to go along with reconstituting the old order meant that the military coup became a forgone conclusion.

The consequences for Turkey's assertion of independence and sovereignty, even by an elected and popularly supported government, is not something that Western powers and their regional allies are ready to accept. Democracy, at least from a post-colonial lens, should only be allowed to continue if it brings forth the colonially incubated elites otherwise, the mobilization of the military is needed to re-set the clock back in the country. An important side effect of military coups is the constant disruption of any indigenously formulated development program, even one that has mistakes and contradictions, since the only acceptable trajectory is the one set in accordance with the colonial epistemology.

In the coming days, months and years, the challenge for Turkey is to navigate maintaining a democratically elected governing elite, while making transformation possible for the old one. Here, the continued process of coups and collapse of political order has led to further fragmentation inside the country and has created the needed conditions for more in roads to recruit disgruntled elites into the colonial and postcolonial order. The Turkish leadership can and should pursue a national multi-faceted strategy rooted in indigenously constituted reconciliation project coupled with a long-term solution to the problem of colonized and Eurocentric elites. Certainly, the coup machinery was formed in late 18th century and it will take multi-generational commitment to reorient Turkey and by extension Arab, Muslim and the Global South into a different worldview - one that asserts independence and sovereignty as real unnegotiable values.