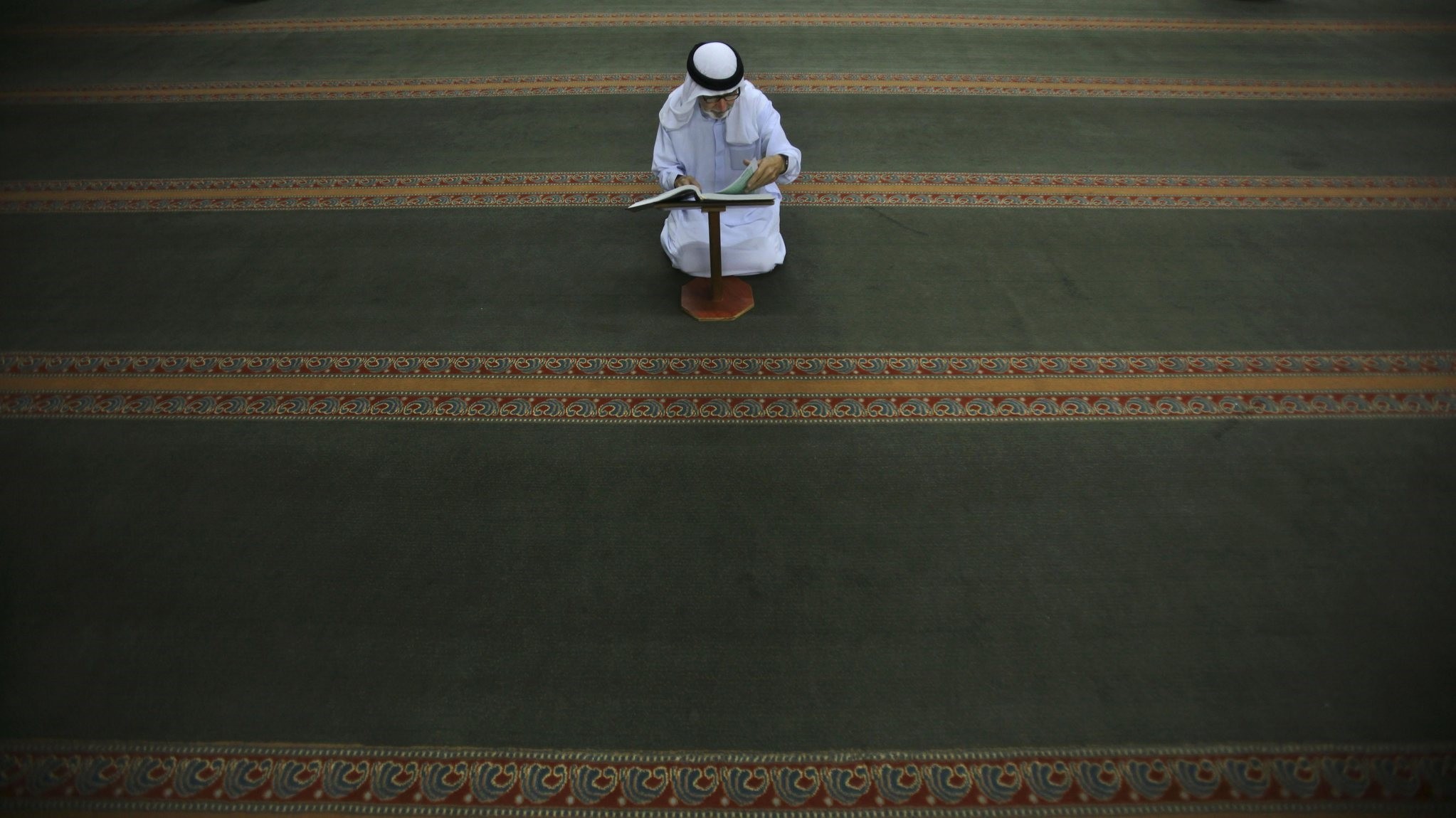 An elderly Palestinian Muslim man reads the Quran following the early morning prayer on the last day of the holy month of Ramadan at a mosque in West Bank, Ramallah, Sept. 9, 2010.
by Hatem Bazian Oct 19, 2017 12:00 am

Muslims are not clamoring to depose or reject their current leaders, but rather they are asking, demanding and pleading for the leadership to actually lead, to improve their economic conditions and protect their human rights at home and abroad

What are the possibilities of an Islamic Economic Union to harness the strength and competitive market advantage of a diverse set of countries endowed with enormous resources and highly talented populations? The basis for forming such a market is present, and the conditions are optimal to achieve it in a period of time possibly shorter than the early trajectory of the European Union. At the core, the four or five different zones that broadly constitute the current Muslim world have competitive and distinct market features that if put into a broader economic union would produce synergies and provide a rapid engine for development. I know the current political climate militates against the idea, but dreams and visions of a better future are never regulated by the here and now.

In the contemporary Muslim world, one can see the presence of a massive and diverse resource base that covers the full spectrum of human development needs and provides for the sustained flourishing of populations in large numbers in Muslim majority countries. Alone and separate, each existing resource can't provide for the needs, but if arrayed strategically next to and in combination with each other, only the heavens are the limits. Likewise, the diverse and mostly hospitable region, massive, ancient river systems, navigable strategic waterways and easy access to markets turn existing resources into advantages if they are utilized for integrated, sustainable and connected economies at local and regional levels.

Critically, the Muslim world is endowed with a massive human base, a population of 1.4 billion that has every skill, knowledge and ability one can think of or contemplate for such an Islamic Economic Union. While an upgrade is needed, levels of education are nevertheless rather high in a number of countries, and the university system is competent in various states in the Muslim world. The major challenge is declining or stagnant investments in education if compared to military or defense expenditure on the one hand, and heavy resource waste and bleed for luxury goods importation. In addition, the lack of such investments and appropriate levels of academic independence has led to the steady flow of intellectuals and scholars to foreign institutions, causing the brain drain problem. The loss of a scholar or researcher to a foreign institution is a net loss for the country, and it takes a generation to replace him/her.

An Islamic Economic Union can make it possible to leverage the academic and educational capacities of all participating countries and facilitate the creation of specialization among clusters of institutions. At present, academic establishments in each country attempt to engage or cover as many fields as possible alone without thinking or planning in a regional manner. I believe in creating hubs among institutions – be it in the social sciences, humanities, environmental studies, engineering, and medicine or information technology – to reduce duplication and provide for more strategic planning. Imagine if an economic union emerges between 55 countries with strategic planning on the academic front to foster and propel economic activities across four continents!

A similar level of cooperation and integration across various sectors of the economy, industry and communication and distribution networks would be transformative if done correctly and carefully over time. Whatever cooperation exists today tends to be formed on a narrow security basis without a strategic regional or comprehensive vision in mind or is driven by a single state actor at best. An Islamic Economic Union must be multilateral, deliberate and strategic in all its endeavors.

We are challenged by the limits of our vision, not by the limits of resources or the enemies that confront us. The past century was painful, and failure has been the norm rather than the exception. How can we emerge from this current state of affairs and create transformative conditions to place the Muslim world anew at the hub of existing human creativity and innovations in all fields that are beneficial to humanity?

I believe that the way to move forward is to work toward an Islamic Economic Union. The steps that must be taken are many, but it begins with a strong will and a vision to positively transform current conditions in the Muslim world. Certainly, the primary impediment to moving toward the Islamic Economic Union is represented by Muslim elites in present nation-states that have total control of existing national markets and resist exploring alternatives out of deep-seated greed, fear and mistrust. Additionally, most current Muslim elites are connected to the economies of their ex-colonial motherlands, and development strategies are mostly regulated by this. Here, the move toward an Islamic Economic Union is a double-pronged process, both internal and external, to be undertaken by governing elites in Muslim majority states. Should this process be done, basic economic assumptions underlying each national economy will be reshaped.

The proclivity of current Muslim majority nation-states to trade mostly with the global north, China and Japan, while having less than 10 percent of their economic engagements with their neighboring Muslim states, is an under-development disaster that keeps giving. Even though Muslim majority nation-states enjoy competitive advantage in certain resources and easy delivery to markets, this gets lost due to the structural aspects of their economy and the focus on trade and economic activities with advanced economies, excluding those states that are more suited to provide greater benefits.

I am certainly aware of the levels of inefficiencies, corruption, nepotism and lack of professionalism, which are not unique to the Muslim world, as they also exist in advanced or highly developed economies, but these are better at insulating the over-all market from their sustained effects. Just think of all the factors that brought on the 2008/2009 economic collapse and the levels of corruption and market manipulations that almost brought the world to its knees. On the flip side of that crisis, a number of Muslim investment houses protected the assets of their investors by adhering to a set of Islamic ethics in the market.

To arrive at an Islamic Economic Union, the focus should be on steps rooted in functional integration and not on demanding ideological unity. Up to this current period, Muslim nation-states and elites have pursued a path based on achieving ideological unity as a precondition to facilitating functional integration. This approach has resulted in short lived projects and failure to translate efforts into reality over a long period of time and across generations.

The Muslim world shares similar, if not identical, core values that can be easily harnessed to functional integration across sectors. In the early stages, the focus should be on all elements that can improve the quality of life and expanding connectedness across the largest number of participating states. Integrating the transportation system, phone and internet communication networks, environmental and air quality standards and creating a uniform building code will make a profound impact.

The next set of issues to be tackled should focus on tariffs and taxation systems that create barriers to regional trade and in theory protect each economy, but in reality only lead to stagnation, isolation and strengthen bilateral relations with highly developed economies that extract greater leverage due to the single market position of each state. Accordingly, the Islamic Economic Union must formulate financial plans to soften the blow on small member economies that are highly dependent on excessive tariffs and trade taxation structure for funding governmental operations.

Reaching a common currency is the game changer for the Islamic Economic Union, but it is the most difficult undertaking and the one that will face counter pressure from the U.S. and EU. A common currency for a new block of nation-states begged to trade in existing resources and regulating products entry into the common market will provide for a qualitative change in the position of the Islamic Economic Union. Currently, Muslim majority nation-states engage in the international market in a basket of hard currencies dominated by the dollar and the euro, which makes it structurally possible to continue to directly and indirectly fund and provide subsidies for both advanced economies. Purchasing dollars and euros to facilitate the entrance of individual Muslim nation-states into the international trade system essentially facilitates the strengthening of both currencies, while structurally weakening the position of the national currency on the one hand and diminishing the existing competitive edge present in resource rich states.

All of what I discussed above is known and not secret. Indeed, I am not the first nor the last to offer a different vision and a hope for an Islamic Economic Union. The biggest and most pressing challenge is getting current Muslim nation-state leaders to agree on taking the less traveled path of building cooperation and integration, rather than investing in wars, regional conflicts and the desire to be the one and only leader for all Muslims.

The Islamic Economic Union will succeed if we all accept that a singular leader for all 1.4 billion Muslims is not achievable or desirable due to the complexity of the contemporary period. A council of Muslim heads of states can rotate leadership for terms of one or two years among all member states, but the rotation should be based on a balance for regional consideration as the better path forward. One hand does not clap, but a room full of hands can produce an orchestra.

It is important to note that Muslims are not clamoring to depose or reject their current leaders, but rather they are asking, demanding and pleading for the leadership to actually lead, to improve their economic conditions, protect their human rights at home and abroad and treat them with dignity as partners who want to see the best for their society. Leaders that can actualize this in words and deeds will live eternally in the people's hearts. We lack nothing of material resources, and yet we find our lot and status diminished by the hour and day. We are leaving our countries by the millions on rafts, planes and on foot to build the economies of other nations and states, but await the day to see the flow reversed. The time to dream of this horizon is upon us and calls for the minds and energies of serious people.