British government must apologize to Palestinians for Balfour Declaration 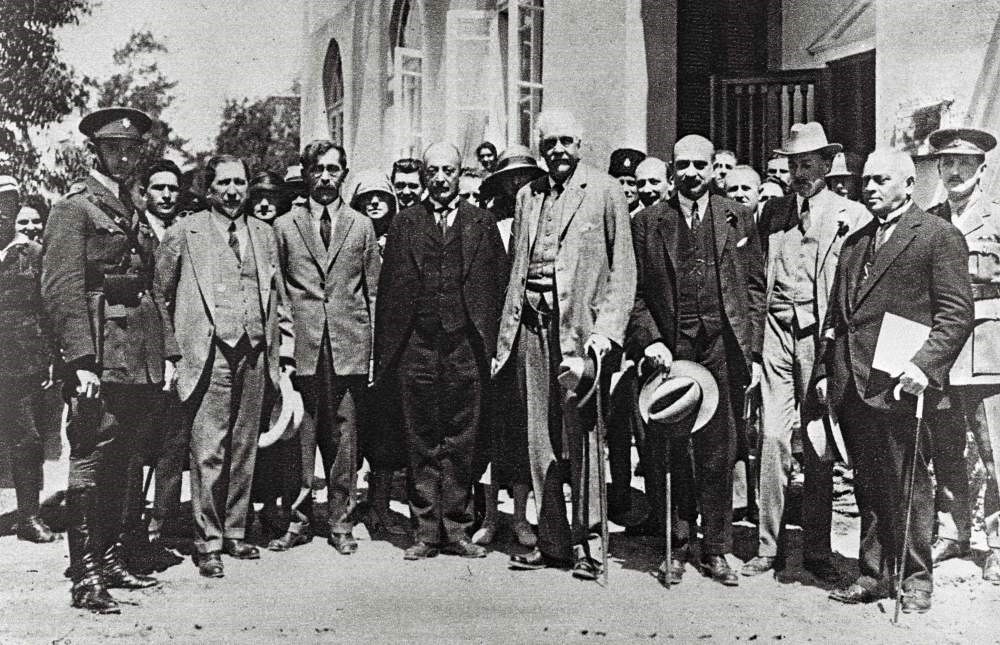 In the 100th year after the Balfour Declaration, the British government must apologize to Palestinians for the grave crime of granting a public document that facilitated their dispossession

On the eve of the 100th anniversary of the Balfour Declaration, Palestinians under occupation and in the diaspora are due an unequivocal apology from the British government. However, on Oct. 29, 2017, the current Tory government foreign secretary, Boris Johnson, struck a celebratory note in The Telegraph calling the Balfour Declaration an "incontestable moral goal: to provide a persecuted people with a safe and secure homeland." This moral goal did not include Palestinians then, and British policies since the issuing of the Balfour Declaration have been lacking the principles of equality, dignity and self-determination. Likewise, Prime Minister Theresa May described the Balfour Declaration in the following terms: "It is one of the most important letters in history. It demonstrates Britain's vital role in creating a homeland for the Jewish people. And it is an anniversary we will be marking with pride." This pride must be understood to be celebrating and affirming the ethnic cleansing of Palestinians and their dispossession of Palestine.

The British issuance of the Balfour Declaration on Nov. 2, 1917, was a dagger thrust deeply into Palestine and Palestinian society, and the wounds it created continue to bleed profusely to this very day. Certainly, 100 years separate us from the actual moment of its issuance, but the meaning and consequences of the 67 words written in 1917 are felt around the globe and continue Palestinians' dispossession of their home. Why the U.K. owes an apology to Palestinians is a very important question.

Before Lord Balfour's pen was put to paper to issue the declaration, the British had already agreed in 1915 to recognize Arab independence and sovereignty over Ottoman Arab provinces in what is known as the Hussein-McMahon correspondence. The Hussein-McMahon correspondence committed the British government to declare Hussein an Arab caliph on the condition that he lead a revolt against the Ottomans. On June 10, 1916, Sharif Hussein launched the Great Arab Revolt against the Ottomans with the expectation that he would be named the new caliph once the war was over. In this context, the Great Arab Revolt was not Arab, nor was it great, but only a part of a British intelligence operation directed at the southern Ottoman provinces, which, if successful, would allow for British troop movement out of Egypt into Jordan and Palestine without having to face stiff resistance.

The British machination against the Ottomans had been in the making for quite some time and the Great Arab Revolt was another chapter in this long-running campaign. Despite the Great Arab Revolt being part of the British strategy against the Ottomans, the commitment to independence and sovereignty made to Sharif Hussein was subverted by the issuance of the Balfour Declaration. Whether such an Arab caliphate would have come about or not is not the issue, but the explicit recognition that the region as a whole constituted a foundation for an independent state governed by Arabs. Here, British colonial duplicity is clear and the double crossing of the Arabs while using a divide-and-conquer strategy to take over Ottoman territories has not changed much since those days.

Concurrently, and exactly at the same time that territorial promises were being made to Sharif Hussein, the secret Sykes-Picot Agreement was being finalized between France and Britian to divide Ottoman territories between both colonial powers. The Arabs struck a deal with the colonial devil for a piece of land but ended up having neither sovereignty nor dignity in return. Indeed, the British and French had no interest in giving Sharif Hussein sovereignty over these vast territories and were only interested in using Arab bodies and arms to fight the Ottomans on the front lines.

More critically, Britain's issuance of the Balfour Declaration ran contrary to the emerging international norm that the era of colonialism had come to an end and self-determination and freedom was the ethical and moral path forward. The calls for self-determination ushered in an important period, and colonial powers, whether willingly or forcefully, consented to this new formulation. In many parts of the world, it took colonized population some 50 to 60 years to gain their independence after putting forth monumental struggles against the British, French, Dutch, Portuguese and Italians. The Balfour Declaration extended the era of direct colonization at the moment of birth of that self-determination. The fact that France, the U.S. and European powers supported the Balfour Declaration is a case in point on the application of a double standard to the meaning and understandings of the concept of self-determination. In 1919, Lord Balfour expressed clearly a total disregard of Palestinian rights: "In Palestine we do not propose even to go through the form of consulting the wishes of the present inhabitants of the country. … Zionism be it right or wrong is more important than the wishes of 700,000 Arabs."

These 700,000 Arabs – Palestinians – constituted some 94 percent of the population of Palestine at the time. Adding more British colonial insult to Palestinian injury, the inclusion of the Balfour Declaration into the League of Nation's Mandate further affirmed the discrepancy between professed ideals of self-determination and continuation of colonial business as usual. The League of Nation's Mandate provided a new international legal framework to continue to subvert the rights of self-determination, independence and sovereignty of indigenous populations inhabiting what is now called the Global South. Confusing and obfuscating what is legal with what is ethical, moral or what is right set the roots of the Balfour Declaration and the League of Nation Mandate over Palestine and other regions. The League of Nations was not a representative of the world and reflected the victors of war and powers that held the most colonial territories and kept millions in bondage while donning the garb of civilization and enlightenment.

The mandate powers granted to the British over Palestine were illegal, unethical and ran contrary to the principles of self-determination. Palestinians had not been consulted about them and had not given input. Rather, the powers that constituted the League of Nations made the decision and moved swiftly to the implementation stage. The mandate included the Balfour Declaration, which contradicted the notion of preparing the population to eventually rule itself since it allowed for the creation of a homeland for another population that had not been present in the country at the time of the declaration and was no more than 3 percent of the population.

The British support for Zionism

No matter what the British say about the Balfour Declaration not being intended to displace Palestinians by providing protection to their religious and civil rights, the original sin lies in giving life and conception to a colonial settler idea. From the first days of the British Mandate, the British governors in Palestine worked diligently to prepare the conditions to give birth to the Zionist dream of a state in Palestine. The British Mandate Authority allowed Zionist Jewish immigration, facilitated the development of Zionist security/military structures, fostered the arming of the settlers, created favorable economic conditions for the implanted movement and granted Zionism and Zionist political standing equal to 97 percent of the indigenous population.

I know that someone will mention that the British House of Lords voted overwhelmingly against the Balfour Declaration in 1922, by 60 to 29, declaring that the Mandate for Palestine was "unacceptable to this House, because it directly violates the pledges made by His Majesty's Government to the people of Palestine [and is] opposed to the sentiments and wishes of the great majority of the people of Palestine." The vote is important since it points to a complete understanding among the British ruling class of what the declaration meant once implemented, but it did not change the existing government policy favoring the Zionist settler colonial project in Palestine.

In all spheres, successive British governments incubated Zionism in Palestine while tormenting and terrorizing the Palestinian communities who dared to reject it and insist on self-determination, sovereignty and dignity in their land. Mind you, this terrorizing has not stopped since the first day the British military set foot in Palestine, and it continues to the present day. The British government issued the Balfour Declaration and then worked hard to implement it at the expense of Palestinians. The "Nakba" and the dispossession of Palestine started with the Balfour Declaration, was facilitated through the machinations of the British Mandate and then was given a final form on the hands of Zionist gangs and death squads that used violence, massacres and expulsion to forge the planned state of Israel.

In the 100th year after the Balfour Declaration, the British government must apologize to Palestinians for the grave crime of granting a public document that facilitated their dispossession. The fact that this took place 100 years ago should fool no one, since its impact and consequences are still unfolding today with Zionist settler colonialism on the march all over Palestine. More importantly, the British government aiding and abetting Zionism and Israel has not stopped, as evidenced in the continued criminalization of Boycott, Divestment, Sanctions (BDS) activists and pro-Palestine spokespeople all over the U.K. and the high level of coordination underway between the two states. Prime Minister May expressed opposition to Palestinian civil society: "I couldn't be clearer – the Boycotts, Divestment and Sanctions movement is wrong, it is unacceptable, and this party and this government will have no truck with those who subscribe to it". Successive British governments have been enablers of Zionism and facilitated the curtailment of peaceful Palestinian resistance.

Palestine is still the issue today and the Balfour Declaration created the conditions that permitted the dehumanization and dispossession of the Palestinian population. The first step toward the British government getting acquainted with decency is a forthright apology for the original sin committed against Palestine and Palestinians. Without an apology for the Balfour Declaration, the British government will continue to facilitate the ongoing ethnic cleansing of Palestinians in Palestine.