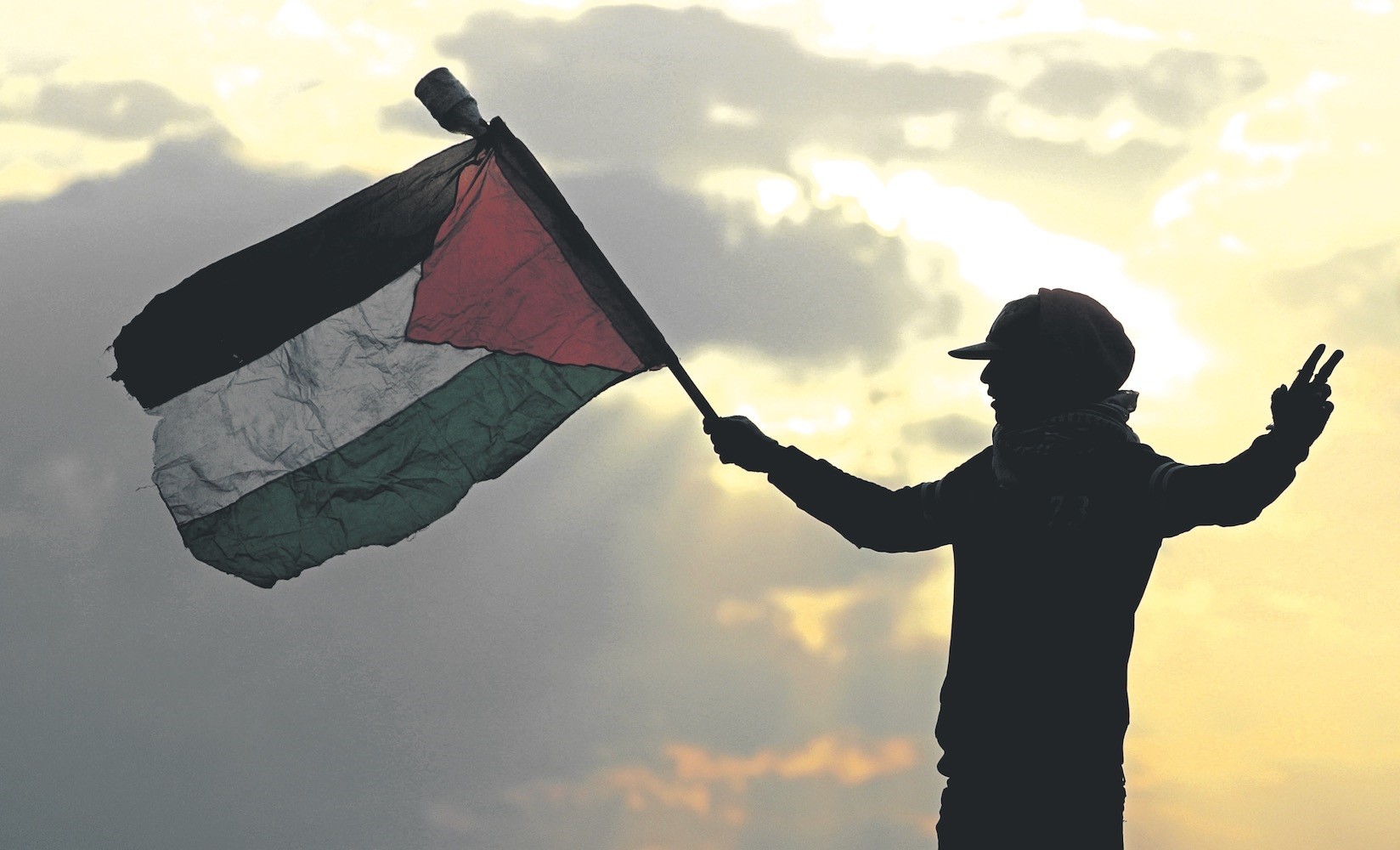 A Palestinian protester holds up a Palestinian flag during clashes against President Trump's decision to recognize Jerusalem as the capital of Israel, Gaza City, Dec. 13.
by Hatem Bazian
Dec 25, 2017 12:00 am

No amount of public relations campaign will change the basic fact that Jerusalem is the occupied capital of Palestine and is, at the core, a Palestinian Arab city, pure and simple!

The U.S. vetoed yet another U.N. Security Council (UNSC) vote to shield Israel from any consequences for the continued occupation and annexation of Jerusalem and wholesale violations of international law. U.S. President Donald Trump's recent recognition of Jerusalem as Israel's capital and decision to transfer the U.S. Embassy to the city was undertaken to force an acceptance of Israel's vision of itself and the city, a unified capital city for the state, but this mocks the existing body of international law and the 4th Geneva Convention. The veto from the U.S. was in stark departure from the last action at the UNSC that had the U.S. permitting the passing of Resolution 2334, which was very critical of the settlements.

In the aftermath of the 1967 conquest of east Jerusalem in the Six-Days War, the Israeli government began to take steps to alter the legal status of the city and to move toward actual annexation, which culminated in a 1980 Knesset bill that cemented the decision and declared Jerusalem the capital of the state of Israel. Immediately and in response to this unilateral action, the UNSC met and issued Resolution 476 that declared Israel's action to be illegal and contravening existing international law governing the status of Jerusalem.

In this context, legal status is not used without serious contestation since the basic legal framework for Jerusalem is directly connected to the British issuing the Balfour Declaration and subsequently the end of Ottoman rule in Palestine on Dec. 10-12, 1917. The British began the process of transforming Jerusalem from a Palestinian Arab city with Muslim and Christian communities and a small Palestinian Jewish one with a limited European Zionist presence into a colonially administered municipality favoring the European settler community and constructing the illusion of an international, open city. Here, the internationalization of Jerusalem was set against the background of stripping the local population of its rights to define and develop its own vision for the city, which was always open and religiously inclusive.

The British legal transformation was the first step in a long process intended to give newly arriving Zionist settlers a foothold in the administration of the city on an equal, if not superior, footing than the local Palestinians. The British Mandate period saw this colonial legalism, a process to privilege the colonizer at the expense of the colonized population, which was sanctioned internationally by the League of Nations, thus creating the figment of colonial imagination of an international city. The Palestinians had to contend with the British Mandate that forced Zionism down their throats and granted settlers a protected legal status and the right to envision a future that is at best hostile to the local population and at worst genocidal by adopting a transfer and expulsion plan as early as Theodor Herzl's founding of the movement. The word legal in the context of Palestine should not be confused with being just, right, ethical or moral. It rather merely represents the enforceable set of rules adopted by the governing power, the British colonial power with a junior partner – the newly incubated and minted Zionist settler-colonial enterprise.

The transformation of Jerusalem into an internationally administered or envisioned city was given further legal legs by the United Nations adoption of Resolution 181 in 1947. Indeed, this resolution effectively severs Jerusalem from Palestinian politics, history and society by creating a separately administered city managed under an international regime to be developed and instituted with U.N. supervision. We are often treated with the slogan Jerusalem for all, which many say, including some Palestinians who are seeking to counter the pernicious Israeli settler colonialism but fail to recognize the basic fact that the framing is distinctively British and colonial at the same time, which was intended to disrupt Palestinian sovereignty over the political, cultural, economic and religious center of their society.

After the 1948 Nakba, Jerusalem was divided into western and eastern sections governed by Israel and Jordan, respectively. Western Jerusalem had the Jewish Quarter, and during the war, Christian and Muslim Palestinians were expelled and their substantial property holdings confiscated and given to the newly arriving Zionist Jewish population. For accuracy purposes, it needs to be mentioned that the limited Zionist Jewish population that lived in the eastern section of the city also got evicted or escaped, and their properties ended being confiscated by the Jordanian government after the Nakba. However, Palestinians were subjected to a program of ethnic cleansing that was followed by massive property confiscation during the Nakba period and the perception of equal or identical circumstanced befalling the two communities must be challenged without undermining the impacts felt on an individual or family basis by Jews and Muslims alike. Indeed, Palestinians faced a settler-colonial project that was intended to dispossess and transfer the population as a constitutive and productive ideological part, if not the primary impetus, in arriving at the creation of the Zionist state, which was not the case for the Palestinians. This is not intended to excuse or reduce the impact, but to contextualize what took place in 1947 and 1948.

In the aftermath of the Nakba, east Jerusalem and the West Bank were annexed to Jordan and became part of the kingdom's responsibility. Certainly, Palestinians objected to this development and, actually, before annexation to Jordan, a gathering took place in Gaza, and on Sept. 23, 1948, declared independence. This important declaration was subverted shortly by a gathering of handpicked Palestinian elites sponsored and organized by Jordan that called for and endorsed unification with Jordan. From 1948 until 1967, the status of east Jerusalem was contingent on this unification decision, which granted Jordan the authority to rule over the city and grant Palestinians full Jordanian citizenship.

The Six-Day War ended Jordanian rule over the West Bank, and east Jerusalem, and Israel took control of the territories, placing the area under direct military rule. Immediately after the 1967 war, The U.N. issued Resolution 242, which called on Israel to withdraw from the territories it had occupied in the last conflict and return to the status quo for Jerusalem. Legally speaking and in relation to Jerusalem, Israel stands in direct violation of Resolutions 181 and 242, since both of them address the inadmissibility of acquisition of territory through war. The Israeli claims of rights in Jerusalem are made of Teflon despite all the propaganda and political posturing that had been undertaken around the globe by Israeli spokespeople and allies, which includes the most recent statements from Trump on the status of the city.

In 1980, the Israeli government attempted a similar stunt by declaring the annexation of Jerusalem and moving the capital to the occupied city. Israel's move backfired, and the country was officially rebuked at the UNSC on three separate resolutions: S/RES. 465, S/RES. 476 and S/RES. 478. Trump's statement on Jerusalem is attempting to forge a new reality in the face of overwhelming international legal consensus on Jerusalem and its status as an occupied city. TheUNSC's resolution vetoed by Trump's administration will not alter the status of the city and will result in bringing more attention to the issues at hand. No amount of public relations campaign will change the basic fact that Jerusalem is the occupied capital of Palestine and is, at the core, a Palestinian Arab city, pure and simple!