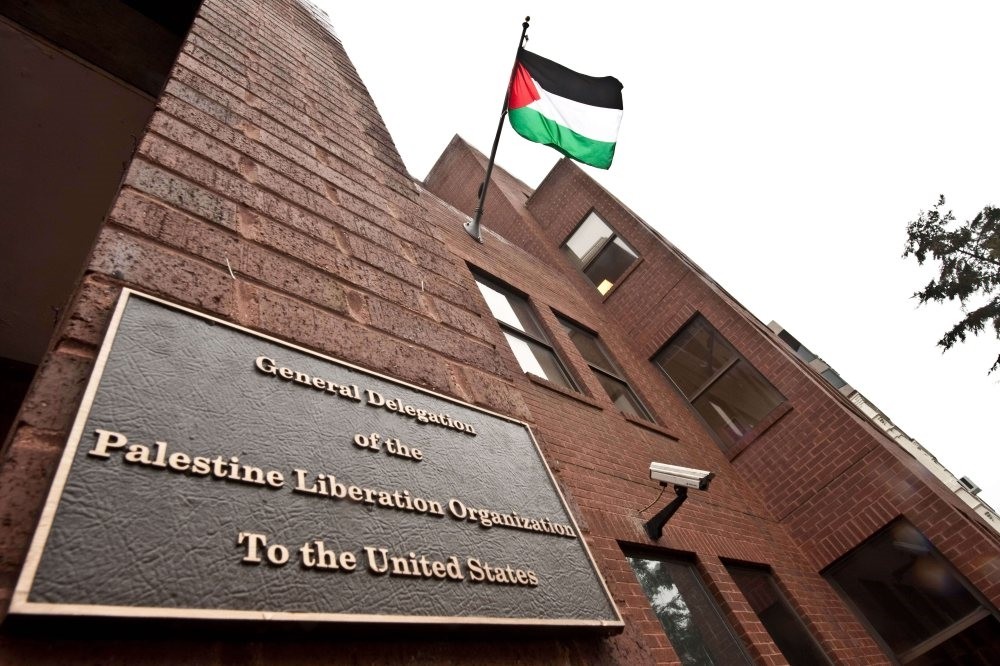 The Palestinian flag flies from the building housing the General Delegation of the Palestine Liberation Organization (PLO), Washington.
by Hatem Bazian Feb 01, 2018 12:00 am

What the PLO and Palestinians inside and outside Palestine must undertake is a very deliberate and systematic global strategy to assert the foundation of the rightful struggle for freedom, justice, dignity, sovereignty, liberation and peace

On Jan. 15, the Palestine Liberation Organization (PLO) Central Council meeting in Ramallah concluded with a vote "to suspend the recognition of Israel until it reciprocates by recognizing a Palestinian state and to cease security cooperation." The meeting was called after Donald Trump's decision on Jerusalem, which was followed by the showdown in the U.N. Security Council and General Assembly. For the PLO, the vote is a clear indication that the Oslo framework had come to an official dead-end and the next stage in the search for Palestinian rights and sovereignty is as elusive today as it was when the Oslo Accords got signed.

In a Sept. 9, 1993 letter from Yasser Arafat to Yitzhak Rabin, the chairman stated, "The PLO recognizes the right of the State of Israel to exist in peace and security… accepts the United Nations Security Council Resolutions 242 and 338… The PLO… commits itself to the Middle East peace process, and to a peaceful resolution of the conflict between the two sides and declares that all outstanding issues relating to permanent status will be resolved through negotiations."

Furthermore, the letter committed the PLO to the "inaugurating a new epoch of peaceful coexistence, free from violence and all other acts which endanger peace and stability. Accordingly, the PLO renounces the use of terrorism and other acts of violence and will assume responsibility for all PLO elements and personnel to assure their compliance, prevent violations and discipline violators."

Yitzhak Rabin's response letter was very terse, "In response to your letter of Sept. 9, 1993, I wish to confirm to you that, in light of the PLO commitments included in your letter, the government of Israel has decided to recognize the PLO as the representative of the Palestinian people and commence negotiations with the PLO within the Middle East peace process."

A longer and more expressive letter was sent from Rabin to the Norwegian foreign minister, which in part stated, "I believe it starts a new era, an era in which we will do our best to achieve peace and security in Israel and, at the same time, give the Palestinians the right – in the context of agreement about the interim period – to run their affairs. I believe that there is a great opportunity of changing not only the relations between the Palestinians and Israel, but to expand it to the solution of the conflict between Israel and other Arab countries, and other Arab peoples."

What is clear from the basic framing of the letters and the actual Oslo Accords is that the PLO gave everything Israel demanded but in return only achieved the right to represent the Palestinians in yet to be held future negotiations to determine the final status issues.

The situation of the agreement

Today, we are certain that the Oslo agreement is dead and all indications point to a collapse of the framework that brought it forward. The Oslo Accords, the secretly negotiated and signed PLO-Israel agreement, has been dead and buried many times over but this time it is very much public and televised as well. Arriving at an actual date for Oslo's demise is an easy one, since the agreement, as far as Palestine is concerned, was dead on arrival. Oslo was never a peace process but a very carefully constructed security agreement that shifted the burden of the occupation to the occupied Palestinian population while maintaining total Israeli control over land and resources. Under the Oslo Agreements, the PLO officially recognized Israel as a sovereign state while Israel in return recognized the PLO as the representative of the Palestinians that will be authorized to negotiate a final agreement within a five-year period. Thus, Oslo did not provide for an end to Israeli occupation or a basic recognition of Palestinian sovereignty over any part of Palestine. Simply put, Israel did not admit that it is an occupying power!

Critically, the framework of Oslo provided for the creation of the Palestinian Authority and the transfer of direct security and administrative responsibilities for the Palestinian population in what came to be known as area A. The other two designated areas B and C, Israel granted the PA civil affairs control and retained military control in B while area C was under total Israeli control – military and civilian.

Oslo is a security agreement that transformed aspects of Israel security responsibilities over the occupied Palestinian population to an indigenously constituted authority with the primary task of eliminating resistance to the current and never-ending occupation. Israel's security structure inside the occupied territories collapsed post-1987 uprising, and the search was underway to find a formula that can maintain maximum territorial control but with minimum concession or no concession at all. Under Oslo, Israel did not admit that it is an occupying power; instead, it cast itself, and the framework provided the language that the territories are under a dispute between equal and valid claims of two parties. Zionist settler colonialism and indigenous rights were deemed equal in the Oslo framework!

The PLO recognition of Israel carries with it the implication of accepting the embedded Zionist claims over the occupied territories and negatively casting the Palestinian claims as ones of terrorism. Moreover, the recognition was not confined or limited in the scope since no specific maps or defined borders were included in the exchanged letters of recognition. Certainly, the inclusion of a reference to U.N. resolutions 242 and 338 might be deemed as a form of limitations but the interpretations of the existing body of resolutions are very problematic and by itself do not provide the needed clarification or a demand for an end to the occupation.

"Suspending" or withdrawing from the Oslo Accords will not be an easy task, even though it should not have been signed in the first place since it allowed Israel to have an occupation using a never-ending negotiation strategy. Here, the PLO and the PA are hard pressed to find a formula to untie themselves from the Oslo framework and the recognition of Israel that is at the foundation of the Accords and "authority to govern" granted to them inside the territories. Also, the regional and global funding for the PA is directly connected and funneled through a mechanism that is under total Israeli control, which makes Palestinian elites highly susceptible to economic pressure and manipulation of their political decision-making capacity. Lastly, the security cooperation is heavily integrated into Israeli security needs and under the direct monitoring of the U.S., and regional Arab security apparatus, and not to forget the direct funding and training enjoyed by the Palestinian security forces.

The PLO step is overdue, but the challenge is to plan for the next period, which promises to be very difficult and filled with many unknowns. More importantly, the PLO and the Palestinians are being put under extreme pressure from the U.S. and Arab states to accept the unacceptable "deal of the century," which is being put forth by Trump, Israel, Egypt and Saudi Arabia. It must be clear that the "deal of the century" might work for a TV show and can be read like a sound bite on a campaign trail, but it is dead on arrival for Palestine and the Palestinians.

What the PLO and Palestinians inside and outside Palestine must undertake is a very deliberate and systematic global strategy to assert the foundation of the rightful struggle for freedom, justice, dignity, sovereignty, liberation and peace. The days and months ahead must witness a rapid political unification among all Palestinians and fixing our collective body politic to represent a unified front to navigate the critical period ahead.

I have in the past and did at present call for the creation of a Palestinian government in exile that makes a sovereign territorial right over Palestine per a founding declaration, which once combined with an engagement at the international level can begin to put more pressure to end and transform the basis of discussion. The specifics need to be worked out, and the Palestine National Council must be empowered through open and inclusive elections and begin the work on the long road back to addressing the legitimate claims of all Palestinians. Every crisis is an opportunity, but the challenge is to correctly identify the emerging opportunity or opportunities in the middle of a challenging period. The primary opportunity is the opening of the door for Palestinian unity, which is the precondition for future success. Unity in the face of crisis is the first step toward undoing Zionist settler colonialism, which feasts on a divide and rule mechanism. Unity, strategy, and organizing for freedom and justice is the answer to settler colonialism.