Palestine and the American First Amendment: A victory for the BDS movement in Arizona 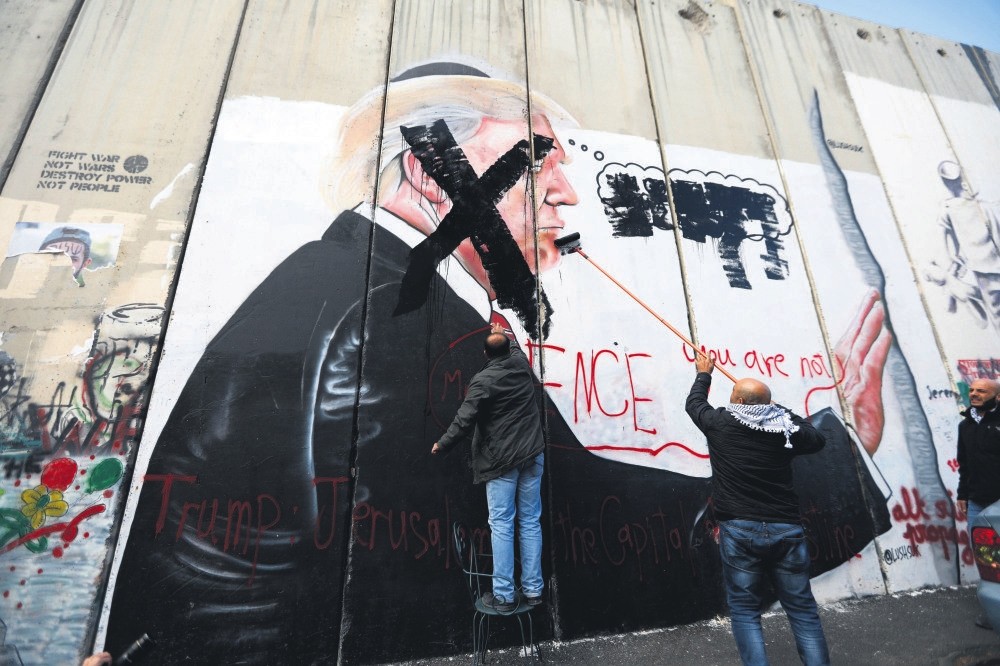 Palestinians paint an X over the face of a picture of President Trump that was painted on the Israeli separation wall in Bethlehem, West Bank, during protests against Trump's decision to recognise Jerusalem as the capital of Israel. Dec. 17.
by Hatem Bazian Mar 22, 2018 12:00 am

The victory in Arizona is greatly important to serve as a model to challenge legistation that protects Israel and blocks free speech in the U.S.

On Friday, March 17, I reached an agreement with Arizona State University (ASU), the Arizona Board of Regents and Arizona attorney general that will allow a speaking event on the Boycott, Divestment, Sanctions (BDS) movement on April 3, 2018, at the university. The agreement is a victory for the BDS movement since the speaking contract previously included an unconstitutional anti-BDS clause that prohibited me from speaking on a boycott of Israel during my visit.

The agreement with ASU is a victory for the First Amendment and the rights of free speech. Again, pro-Israel forces worked hard to silence the voices of justice and human rights, but hard work and dedication made the difference. This is a victory for the BDS movement and a victory for Palestine's voice in the U.S. I am deeply indebted to the Council on American-Islamic Relations' (CAIR) hard work that will make it possible for me to exercise the rights enshrined in the First Amendment of the U.S. constitution – the right to speak at ASU on BDS and to oppose the Israeli apartheid. This success was made possible through the hard work of CAIR Arizona, CAIR National and the American Muslims for Palestine's (AMP) team on this important legal challenge.

Last month, I received an invitation from the Muslim Student Association to deliver a lecture on Palestine, the current crisis resulting from the U.S. president's decision to move the U.S. Embassy to Jerusalem, and the effectiveness of the BDS movement at ASU. As per the regular procedure for such an engagement, the students sent me ASU's contract detailing all the conditions that must be fulfilled as well as the costs associated with travel, accommodations and stipend.

I read the contract and started filling it out but stopped as soon as I got down to item 20 on the list of contractual conditions. Surprisingly, ASU's contract included the following text for item number 20: "No Boycott of Israel. As required by the Arizona Revised Statutes § 35-393.01, Entity certifies it is not currently engaged in a boycott of Israel and will not engage in a boycott of Israel during the term of this Contract." This text was added to all ASU and other Arizona state public agencies contracts to adhere to the new law, which, at the root, seeks to protect Israel from the BDS movement.

I stopped filling out the contract as a matter of principle. I cannot and would not sign this contract in full conscience, being one of the key BDS organizers in the U.S., an academic who writes on BDS and an activist on Palestine with the strategy to use a nonviolent, human rights-focused movement to address Israel's continued violations of international law. The contractual condition creates an ethical dilemma since it stipulates individuals to sign provided they are "not currently engaged in a boycott of Israel and will not engage in a boycott of Israel during the term of this Contract," something that I cannot do as a precondition to be able to speak at a public university on BDS.

This contractual condition boils down to ASU and Arizona setting up a prior restraint on speech. "In the First Amendment law, a prior restraint is government action that prohibits speech or another expression before it can take place," as the Cornell Law School explains. The government or any power has "two common forms of prior restraints. The first is a statute or regulation that requires a speaker to acquire a permit or license before speaking, and the second is a judicial injunction that prohibits certain speech. Both types of prior restraint are strongly disfavored, and, with some exceptions, generally unconstitutional." Here, the ASU contract included language that clearly sets up prior restraint on my ability to speak about BDS during my upcoming visit to the campus.

Consequently, and with the help of the CAIR office in Arizona, I challenged the law so as to not accept the prior restraint imposed by the American Israel Public Affairs Committee (AIPAC) through its work in the U.S. political system to prevent those points of view that are critical of the ongoing Israeli occupation. I believe that this regulation in Arizona and other states like it is an attempt by AIPAC, other major Zionist organizations and the Israeli government itself to win an unwinnable cause, to maintain support for an apartheid state that constantly violates international laws. The law attempts to defend the indefensible by restricting freedom of speech and academic freedom so as to rescue and protect Israel and its continued apartheid and occupation. More critically, the condition and the Arizona law treats Israel as an exception to the norm. The law restricts free speech that is foundational to the First Amendment and a constitutionally protected right – the ability to ask for public adherence to a call for BDS of Israel.

On a national level, AIPAC and all the major, mainstream and established Zionist organizations – the Jewish Community Relations Council (JCRC), Anti-Defamation League(ADL), Zionist Organization of America (ZOA) and American Jewish Committee (AJC) – are engaged in a full campaign to restrict free speech on BDS and curtail criticism of Israel and its continued human rights violations. The attempts at legislation supported by all the major mainstream Zionist organizations is intended to shield Israel from criticism and possibly cause American people to abandon Israel as they did in the past when it chose to divest from South Africa. Here, a heavily Israeli funded and full national campaign is underway to counter the BDS movement. This campaign attempts to use federal and state legislation to target individuals with structured and systematic defamation, as well as to work to recruit voices that normalize Zionism among segments of the Arab and Muslim communities through the Shalom Hartman Institute Muslim Leadership Initiative and fictitious interfaith projects that focus on silencing Palestine. Israel's supporters have been the leading agents on restricting free speech and academic freedom on many college campuses by advocating a whole host of civility codes and conflating anti-Semitism with anti-Zionism and criticism of Israel while using university administrations and administrative regulations to limit the free expression of solidarity with Palestinians. The cases of San Francisco State University with professor Rabab Abdulhadi's Arab and Muslim Ethnicities and Diasporas Initiative (AMED) program and the University of California Berkeley in relation to a course on Palestine is a case in point where university administrations became part of the strategy to limit pro-Palestine free speech and academic freedom while coordinating these strategies with local Zionist leadership and, at times, with the Israeli Consulate in San Francisco – the representative of a foreign state given access and solicited for ideas on how to limit the constitutional rights of American students and professors.

AIPAC and many of its regional affiliates have been working overtime to push for legislation across the U.S. to restrict free speech on BDS, and in some cases to criminalize advocacy for Palestinian human rights. The victory in Arizona is very important and serves as a model to challenge legislation that seeks to protect Israel at the expense of constitutional rights, the right of free speech and freedom of association, since considerable demonization and criminalization efforts on college campuses are directed at Students for Justice in Palestine. Israel and its supporters should not have veto power over the First Amendment and legal challenges should be mounted to expose the efforts of a foreign government and its agents to undermine the right of anyone in the U.S. to critique a country that is addicted to human rights violations and U.S. foreign aid. BDS is out of the bottle and attacking the First Amendment is a battle Israel and its supporters will certainly lose.