U.S. defunding UNRWA is an attempt to starve the Palestinians into surrender 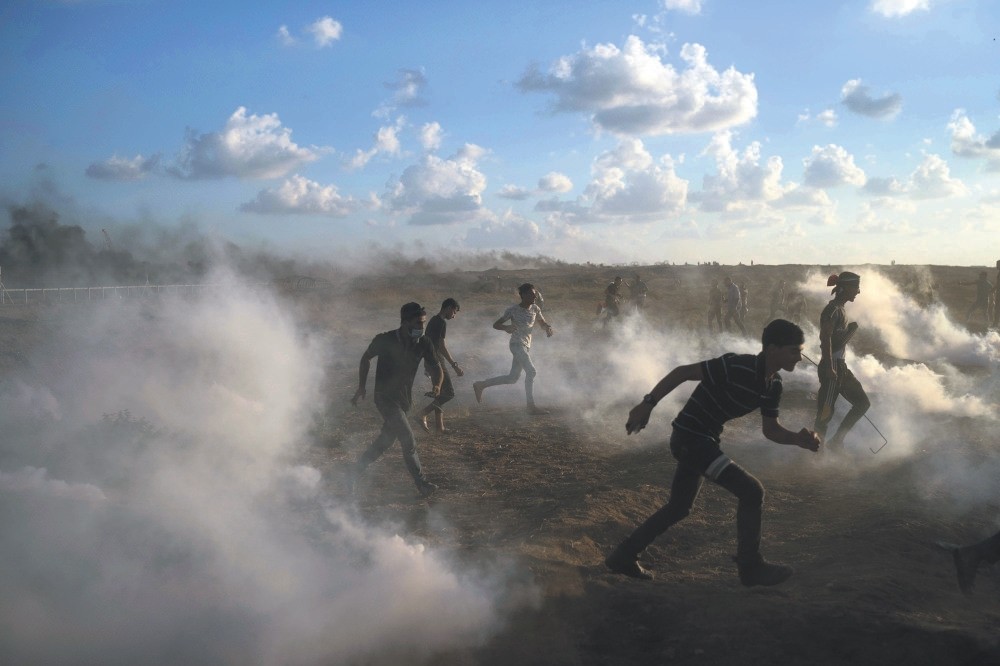 Palestinian protesters run from tear gas fired by Israeli troops during a protest at the Gaza Strip's border with Israel, Sept. 7, 2018.
by Hatem Bazian Sep 11, 2018 12:00 am

The decision taken by the Trump administration to defund or freeze $200 million of the U.S. contribution to the United Nations agency that helps Palestinian refugees, a sum that accounts for one-third of the financial needs for Palestinian refugees, is an attempt to liquidate the root cause of the ongoing conflict, the 1948 Israeli ethnic cleansing of 78 percent of Palestine and the forceful expulsion of 750,000 civilians.

Trump's action follows the Congressional Bill H.R. 6451 from July 2018, that called for connecting U.N. Relief and Works Agency's (UNRWA) funding to limiting the Palestinian refugee classification in such a way that "[1] the derivative refugee status may only be extended to the spouse or minor child of such a refugee; and [2] an alien who was firmly resettled in any country is not eligible to retain the refugee status."While Trump, Jared Kushner, David Friedman and Jason Greenblatt are joyful about this supposed strategic move, the basic fact that the refugees and their rights are not going away any time soon, remains. Indeed, the Islamophobe, anti-Palestine, and anti-Palestinian Daniel Pipes was in celebratory mood declaring that the Trump administration implemented the Middle East Forum plan to sideline UNRWA. On the Middle East Forum website, he called for two additional steps to cement the ethnic cleansing, which started with Nakba and bring apartheid Israel into an endgame – wishing that the Palestinian refugees' right of return would disappear into thin air.

The plan, in reality, is Zionism's last-ditch effort at another racial and demographic jump to achieve the "purity" of the aspired Zionist state, Israel. If there are no Palestinian refugees and no right of return then the apartheid "pure" Zionist state, Israel, could protect its borders, cities and population from the possible racial, religious, cultural, and political "dissolution, defilement and encroachment" by the Palestinians.

Poor Pipes desires purity at all costs and this "ingenious" plan might work, at least for a short time, considering all the players involved in Trump's White House – the State Department, the U.S.-U.N. representative, the U.S. Ambassador in Israel, and a willing Arab world looking for an alliance to strike Iran.

The three staged Middle East Forum plan that was adopted by the White House wants to liquidate the Palestinians right of return before Kushner supposedly releases the U.S.' new "peace" plan. The Palestinian refugees are at the heart of the ongoing conflict and wishing them away by denying the UNRWA its funding will not begin disentangling the complexities involved in this issue.

Seeking leverage in the next round of the never-ending "peace process" is Israel's main focus, which is directed at cementing a new reality through U.S. policy changes, both by moving the embassy to Jerusalem and by erasing the right to return from the agenda. More importantly, Israel's "peace process" negotiations approach is to constantly create and bring new facts which cause a shift in the agenda and the goalpost for Palestinian state aspirations.

The settlements are Israel's "facts on the ground" and the U.S. position on the subject has shifted away from Reagan's policy that affirmed the view that they constitute a violation of international law to one that totally embraces Israel's position under the current Trump administration. Shifting the goalpost and the items on the agenda is Israel's way of using the "peace process" as a strategy of occupation and annexation by other means. The settlements, illegal outposts, security areas, apartheid wall and bypass roads have already swallowed about 60 percent of the West Bank, the area that will constitute the future Palestinian state. Israel has no intention or plans to allow for any part of the already devoured and developed part of the West Bank to be returned to the Palestinians to build the hoped-for state. The two-state solution is dead and buried six feet under by Netanyahu and his U.S. operatives.

The land is gone, the facts on the ground are visible, and the international and regional political alignment militate Israel and its U.S. operatives to go for the kill; liquidate the Palestinian cause once and for all. According to the triumphant Zionists in Washington D.C. and Tel Aviv, removing Palestine and the Palestinians from the global and regional agenda will allow the new Middle East to be born with Israel as the engine and center of an alliance that is ready to protect the Gulf States and the other Arab countries from the Iranian threat. Starving the Palestinians into submission is the simple and unsophisticated strategy developed by a bunch of local real estate and bankruptcy operatives doing Israel's bidding.

Assuming that the removal of the refugee designation from 5-6 million Palestinians is accepted, what are then the next steps for their legal status in each country? Jordan, Lebanon, and Syria currently have the most of the Palestinian refugees and a change in status must translate to a change in their legal designation in each of these three countries. While Jordan does give citizenship to Palestinian refugees living in the country, this is not the case for Syria and Lebanon and any change of status will lead to far-reaching complications that can't be easily wished out of existence. Yes, the plan calls for economic incentives and development, a type of Zionist, American and Gulf States sweetener for the deal but this is not sufficient to bring the three countries to accept the unacceptable. Here, I am not yet touching the Palestinian response and why would anyone think they will surrender to Trump's and Netanyahu's plans. Coming closer to historical Palestine, the refugee population in Gaza and the West Bank has neither an interest in letting go of its right to return nor to take into account the possibility of a third country taking the responsibility for them. Egypt might be offered some financial incentives to help alleviate Israel's challenge with Gaza but this will require granting citizenship to the population and incorporating Gaza into the country. I am not saying this is out of the question, for the current Egyptian leadership owes a lot to Israel for the support in carrying out the coup and stabilization of their standing on the international stage post the military coup. The assumption is that the Palestinians, being starved, isolated and cut off from the support of the Arab world will come to sign away their surrender and death certificate so the Zionist dream can finally come true.

The deal of the century?

The Trump-Zionist-Israeli "peace" plan will be announced soon enough but let me assure you that it is dead in preannouncement and will be dead on arrival. Kushner's blueprint for the deal of the century does not meet the minimum requirements for the Palestinians and attempts to affix Netanyahu's rejectionist and revisionist Zionist vision on the current administration and the region. Trump, on his part, has embraced Netanyahu's vision and has set up the most pro-Israel right-wing Zionist staff in the White House to lead the regional policy forward, but success will not be materialized due to some of the reasons I mentioned above.

Challenging the forthcoming policy is the major priority for anyone concerned about the Palestinian cause. In the days and months ahead, the global solidarity movement has to mobilize like never before to challenge Trump, Kushner and Netanyahu's proposal that seeks to liquidate the Palestinians' right of return. The global effort should rally support around the right of return and place the item on the agenda of every local, state, regional, national, and international body and demand a decision to affirm U.N. Resolution 194 and the rights of refugees to return to their homes and property.

More critically, the global solidarity movement should likewise link every boycott, divestment and sanctions (BDS) effort and campaign more explicitly to the right to return, which would go a long way to undoing the effort at erasure of the refugees from the "peace process" agenda. The Trump-Netanyahu alliance confronting Iran at the expense of the Palestinians will be a disaster in the making and when all is said and done let's be clear that Israel and Zionism were the ones that called and mobilized for it – not the liberals, not the progressives or Middle East Studies scholars at universities.