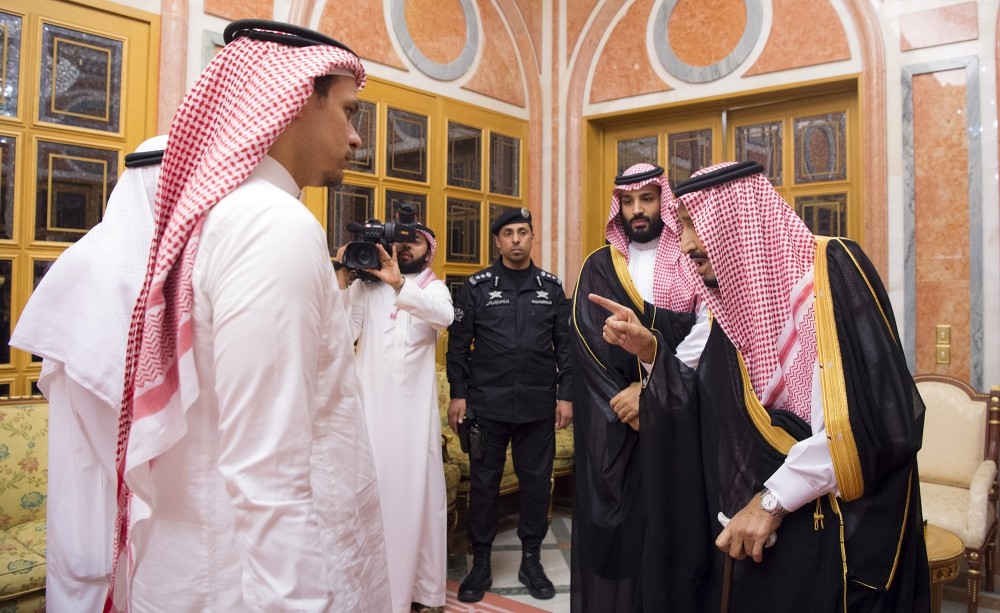 Jamal Khashoggi's murder inside the Saudi Consulate in Istanbul epitomizes the death and mayhem style of governance approach in modern Arab states. Governance by death or more precisely by bone saw or more like chainsaw is inscribed into state structures by ruling elites that are committed to holding onto power by eliminating all opposition by any means necessary, family members included. The ruling elites' – or more accurately ruling syndicates – with flags and stamps bearing their likeness clinched power some 100 years ago and have taken the position of territories and societies in the same way a person claims a personal object to do with it as he or she pleases without the slightest concern for short-term or long-term consequences.

Making this absurdity possible is the proclivity to dress the mayhem and constant depravity with Islam, the religious cloak of legitimacy and guarantying the acquiescence of the captive subjects that are metaphorically called citizens. The current crisis in Saudi Arabia's ruling family is paradigmatic of the governing approach in the region, the foreign interests that protect and feed off them, which is the real cause of the ongoing destruction and never-ending wars in the region. Jamal's murder and dismemberment is not a decision of a low-level operative or even 15 of them; instead, these are decisions taken at the highest levels of government and are reflective of the whims of a ruler who possesses subjects but sees no citizens.

Jamal's murder and dismemberment are not unique nor out of the ordinary in a region that has become accustomed to shedding blood as the only instrument of governance. The Arab region's wreckage has already claimed millions of lives, sent millions of refugees and exiles abroad and destroyed the future horizons of the next generation or two. Khashoggi's murder in the Saudi Consulate, a sanctuary for a Saudi citizen in a foreign country, is paradigmatic of the governance by death that is the norm within the confines of the sovereign territory itself.

The gruesome murder is shocking but let's be accurate in stating that death, as the only policy has become the norm for governing elites across the globe. In the case of the U.S., the use of drones is the more sophisticated tool of global governance as well as instituting an expansive regime of torture and rendition that wrecked the articles of the 4th Geneva Convention. Other recent examples include Russia, China, and the Philippines but for sure the 19th and 20th centuries and European colonization may be entered as exhibit A in any case for the total disregard of human dignity, but this is not the subject of this article.

Here, I am a very harsh and direct critic of Arab despots because they dress their actions and propensity to murder and mayhem in the name of Islam, which is a real calamity. Critically, the propensity to obfuscate the failure of governance by using classical Islamic texts to solicit obedience and silence in society is a travesty. Often, the governance by death is posited to be an attempt to save Islam from those inside seeking its destruction but not once stopping to think that they are the real cause for emptying Islam of its ethical and moral meanings. The Arab population, 300 million of them, are hostages to the never-ending cycle of oppression, state-organized violence and governance by death approach.

Immediately after the murder and dismemberment, the cover-up included such absurdities as Jamal's supposed connection to the Muslim Brotherhood, that he is part of an intelligence operation and a host of other defamation and character assassinations on top of the murder itself. Even if this third-grade level "intellect" attempt at a cover-up is correct, which it is not, it is not a cause for murder and dismemberment. It has become fashionable among Arab despots to affix the label of Muslim Brotherhood to anyone that disagrees or opposes their governance by death system.

Just in the past 40 years, this unending wreckage has claimed the lives of possibly 4-7 million Arab lives. In reality, we are not sure of the actual numbers since official "experts" of international bodies do not keep accurate data on all the wretched of the earth – Arabs included. The destruction and governance by death in the Arab region include the destruction of Iraq, Syria, Libya, Yemen, Lebanon, Somalia and facilitating the siege on Gaza and the continued empowerment of Israel over the Palestinians.

The chainsaw is a symbolic representation of the state structure in the Arab region, which employs state resources and power to eliminate and push its best and brightest to graveyards, prisons and exile. On a regular basis, I witness on a first-hand basis the wreckage of Arab despots in refugee camps across Europe, the U.S. and Canada. Young and old, the educated, and those that escaped from farmlands in the Arab region are huddled in tents and on the sidewalks of Europe not having a meal to eat because governance by death is the only choice at hand. The Arab region's despots despise their young, loathe their thinkers, crush the aspirations and creativity of their scientists, steal the wealth of business people and demand unconditional obedience, which all is rationalized through an appeal to religious text and authority.

Even before this current period, the Arab region sent its best and brightest to fight against the Russians in Afghanistan in a Cold War payback jihad to avenge America's loss in Vietnam. Yes, the young and brightest called into service by Arab despots and stoked into a religious frenzy and transformed into death machines and shadows of their human self to settle accounts between the U.S. and the USSR. Jihad on demand in the service of empire!

More insidious, the same Arab despots who rallied their young and brightest into this Cold War jihad then after the end of the operation turned around and arrested, tortured, killed and sent into exile a whole a generation that returned from serving the empire. The Arab despots employed the same approach to stoke the Iraq-Iran War for over eight years and through it thinning the ranks of the young and brightest by 2.5 million between dead, maimed and disabled for life.

The fate of the Arab region

Every region around the world has witnessed wars and conflicts, but the Arab region is destined to have death and destruction as the only governing tool. We do not have citizens, but bodies are waiting to be sacrificed for one despot after another climbing on a top of a heap of skulls to claim the mantle of a supreme leader of all. The governed have no role but to await their number to be called to face the chainsaw and fashioned into submission – dead or alive.

The murder of Jamal is a comedic tragedy that should be made into an opera because it represents and exposes the governance by death narrative of the Arab region. More tragic is the attempted cover-up and the managing of the "public relations" fallout that illustrates the total incompetence and disregard for the rule of law. Here, political assassination and eliminating opposition figures is not unique to the Arab region and is well established in history, but the operation, the cover-up and incompetence are unprecedented.

The ugliest part of this murder is the attempt to defend it and clothe it in religious garb. Islam, Islamic law and ethics have nothing to do with what took place, and the ruling elites should not be permitted to hide behind any aspect of the religion. Between Islam and the cover-up of a crime by a despotic ruler, the choice must always be Islam and its ethical foundation.

The murder is a sufficient crime for the despot to commit, but when religious leaders and figures cover it up, then they are committing a crime against Islam itself and killing its ethical and moral grasp in the minds of millions across the globe. Governing principles are universal, and despite the difference in epistemic foundations for the laws used by every society, they include upholding justice, the principle innocent until proven guilty, equality before the law by the ruler and ruled and transparency and accountability for all. The time has come for the Arab region to bring an end to despotic forms of government, adopt universal and best-governance practices and embrace citizenship, equality and the rule of law applicable to all.