Exposing the Israel lobby's inner workings in the US 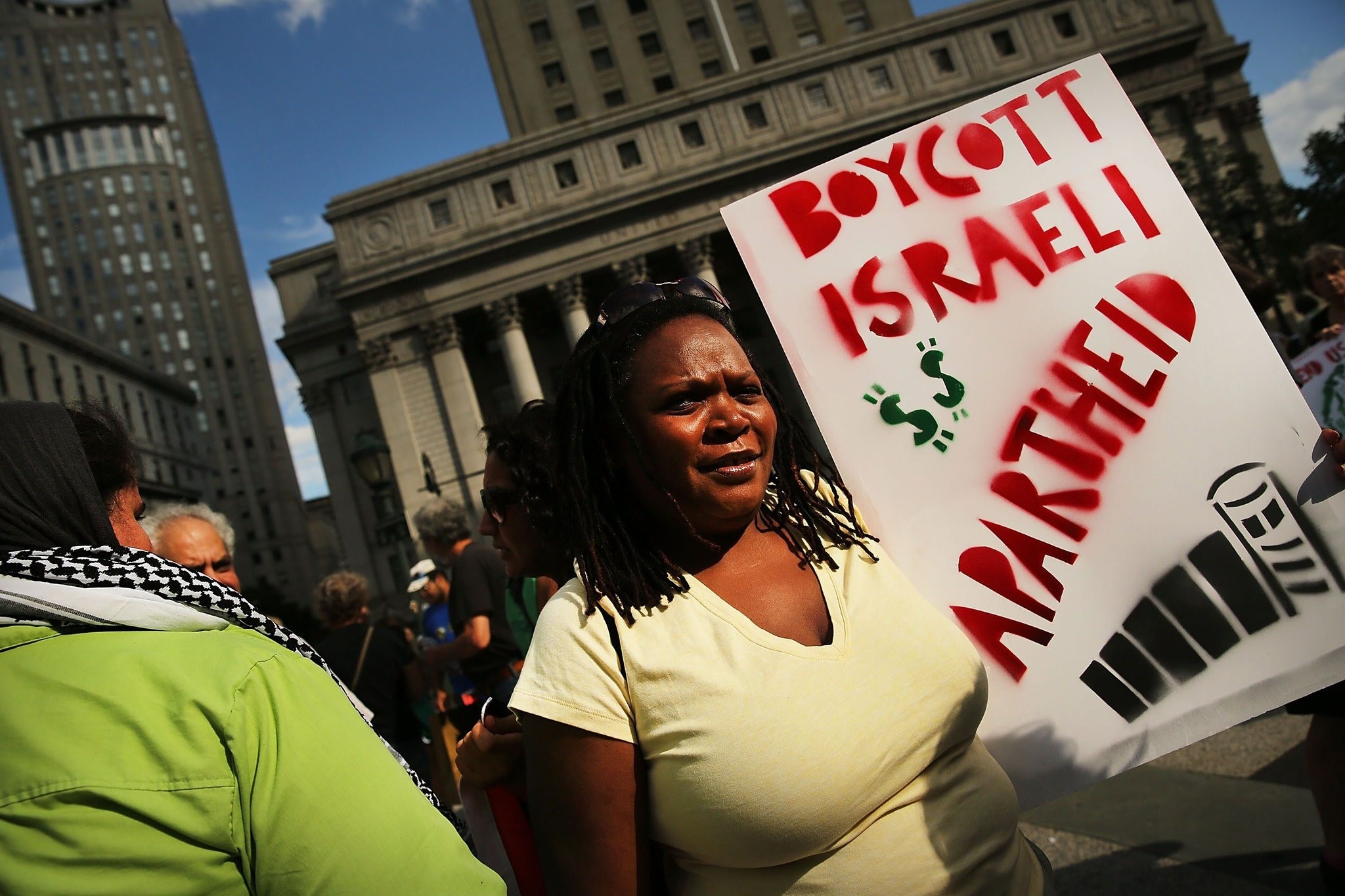 University presidents and administrators provide the public relations stage and oxygen for Israel's propaganda machine and create the conditions that further target and marginalize Palestinians, Jewish voices and communities of color that are challenging Israel

Corporate level, enterprise-grade social media intelligence software is one of the sophisticated tools used by Jacob Baime, executive director of the Israel on Campus Coalition, to demonize and defame Palestine activists in the U.S. and on college campuses. Despite the focus on Russia's interference in U.S. domestic affairs, the newly released documentary shows that Baime coordinates his activities with the Israeli Ministry of Strategic Affairs and directly shares "operations and intelligence briefs" collected from the field; this deserves equal or more attention than the Russian investigation. How did we become aware of all this material and intrusion by Israel operatives into domestic affairs in the U.S.?

The recent "unofficial" release of Al-Jazeera's documentary, "The Lobby – U.S.," on the Electronic Intifada site exposed strategies utilized by Israeli front groups in the United States to target Palestine's advocacy, Students for Justice in Palestine (SJP) and the Boycott, Divestment and Sanctions (BDS) movement's successes on college campuses. The documentary was finished in 2017 but was kept out of the market due to lobbying efforts by major Zionist organizations and individuals. "The Lobby – U.S." follows a similar Al-Jazeera undercover investigative documentary that exposed the inner workings in the British context and efforts that targeted the Labour Party and student activism for their support of Palestinian human rights and calls for BDS.

Electronic Intifada's release of the four-part series online came after almost a year after the documentary was completed and was subject to an intense effort to censor it by major Zionist figures in the U.S. After the Qatari-Saudi tensions, a decision was made at the highest levels not to air it and focus more on an attempt to defuse the ongoing conflict. Keeping the documentary off the air came on the heels of the hiring of Nick Muzin, the U.S.-based lobbying firm Stonington Strategies, to impact U.S. policy on the ongoing Gulf crisis.

Why to watch the documentary

The documentary is a must-see for anyone who is engaged in domestic U.S. politics, campus organizing and for sure anything related to Palestine, Arab and Muslim world concerns. Undercover investigative reporting is a valuable tool to shed light on a shadowy network that operates in the U.S. on behalf of a foreign state, Israel, with the single focus on keeping the $3.8 billion in annual taxpayers' payouts to a country that continually violates international human rights standards.

Critically, "The Lobby – U.S." documentary exposes the direct control and involvement of the Israeli government in domestic affairs in the U.S. as well as massive intrusion into student organizing on college campuses. According to Electronic Intifada reporting, the documentary exposed the use of social media by "Julia Reifkind, then an Israeli Embassy employee," describing her typical workday collecting and passing information on Palestine activists in the U.S. as "mainly gathering intel, reporting back to Israel… to report back to the Ministry of Foreign Affairs, the Ministry of Strategic Affairs." In one clip, Julia admits to the hidden camera to using all type of fake names in her effort to collect information on SJP for the Ministry of Strategic Affairs.

More alarming, the documentary, according to Electronic Intifada, provides details on "the efforts of Israel and its lobbyists to spy on, smear and intimidate U.S. citizens who support Palestinian human rights, especially BDS – the boycott, divestment and sanctions movement." One clip shows an ex-Israeli military intelligence officer, Sima Vaknin-Gil, claiming to have mapped Palestinian rights activism, "... globally. Not just the United States, not just campuses, but campuses and intersectionality and labor unions and churches." The collected data is utilized to mount a strategic campaign against Palestine activists on college campuses and across the country.

This web of well-funded groups and individuals operates to silence and subvert U.S. citizens and college students' rights to speak and organize in relation to Palestine. In the past people focused on the American Israel Public Affairs Committee (AIPAC) as the focal point of the Israel lobby efforts, but the documentary provides a window into the complex web of groups that are working to defame and demonize Palestine advocacy in the U.S.: the list includes the Israel on Campus Coalition, the Israel-American Council, the Israel Project, the Israel Action Coalition, the Canary Mission, Stand With Us, the Emergency Committee for Israel, the Hoover Institute Fellowship Program and the Foundation for Defense of Democracies.

Students for Justice in Palestine, a group in which I worked with others to establish on the UC Berkeley campus back in 1992-1993 and currently has over 200 chapters across the U.S., is the focal point of the Israeli Ministry of Strategic Affairs efforts due to the success on college campuses and bringing the BDS into public attention. Far from being a grassroots effort to garner support for Israel, the documentary illustrates the "Astroturf" or industrial nature of pro-Israel mobilization across the country. In one clip, Hoover Institute D.C. Fellowship participants are recruited by Noah Pollak, the executive director of the Emergency Committee for Israel, and bused across town to stage a pernicious, highly Islamophobic and pathetic protest at the national SJP conference. Here, the documentary sheds light on pro-Israel organizations infusing Islamophobic discourses in their attempts at silencing Palestine activists. This is very significant information and comes on the heels of recent evidence of the San Francisco and Los Angeles Jewish Federations' funding of Islamophobic groups in the U.S.

The reason behind the facts

Here, it is important to emphasize that SJP activists do not receive support from university administrations, which likewise are subject to a systematic influence program directed by the Israeli Ministry of Strategic Affairs and coordinated by Israeli Consulate offices across the country. The effort directed at universities was brought to light in the work of Jackie Retig, the director of Academic Affairs at the Israeli Consulate in New York, stating as a matter of fact: "Every university president takes our calls, take our meetings, works with us, because we are a legitimate government organization. There are so many organizations focused on BDS. For the most part, when it comes to BDS, we are very behind the scenes. I'm meeting with university presidents, faculty and students. What they're doing is building relationships with local politicians, making sure politicians know to turn to them when Israel-sensitive things come to the table."

Far from being neutral or uninvolved, university presidents across the country and high-level campus administrators are recruited through "relationship building" strategies and politicized to see Palestine and SJP only through an Israeli and Zionist lens. These relationship-building efforts are directed by the Israeli Consulate Office of Academic Affairs, and university presidents and ambitious administrators go along in the effort to censor Palestine and build institutional and academic checkpoints for students, faculty and staff involved in Palestine-related work or anything related to BDS.

In the aftermath of the Associated Students of University of California Senate adoption of the first BDS divestment bill back in 2013, documents obtained through a Freedom of Information Act (FOIA) request from the episode provided evidence that the university chancellor, the dean of students and UC Berkeley's public relations office coordinated their opposition and responses with the Israeli Consulate in SF. Berkeley's coordination with the SF Consulate on matters related to student activism on Palestine is the norm rather than the exception. A similar case of coordination is the ongoing attacks and defamation of Professor Rabab Abdulhadi at San Francisco State University, due to her tireless work to develop Arab and Muslim Ethnicities and Diaspora Studies in the School of Ethnic Studies and for forging academic relations with Palestinian universities.

I can provide countless cases of this type of coordination and subversion of the constitutional and academic rights of students on American college campuses to serve and protect Israel's interest at all costs. Each university president and administrator must be held responsible for this structured process of silencing and targeting Palestine activists. More critically, the discourses employed by Israeli Consulate offices across the country and the countless groups listed above are heavily laced with Islamophobic content that demonizes and express open bigotry toward Palestinian and Muslim students. University presidents and administrators become levers in the massive pro-Israel propaganda machine and provide the lubricating oil for the structured Islamophobic campaign that targets Arabs, Palestinians, Muslims, progressive Jews and their allies on college campuses and in the community.

University presidents and administrators provide the public relations stage and oxygen for Israel's propaganda machine and create the conditions that further target and marginalize Palestinians, Jewish voices and communities of color that are challenging Israel. Increasingly, university leadership uses the euphemism "campus climate" and "inclusion" strategies as a spear to hit Palestine activists on campuses. Often the focus is on Zionist complaints that conflate the BDS movement with anti-Semitism. Targeting and demonization efforts are coordinated with the fronts of the Israeli lobby as well as major Zionist organizations that seek to silence Palestine voices, criticism of Israeli apartheid and continuing human rights violations. The time has come to demand an end to Israel's intrusion on U.S. college campuses and that administrators commit themselves to providing real protection for academic freedom and student rights to organize in opposition to the interest of a foreign state.