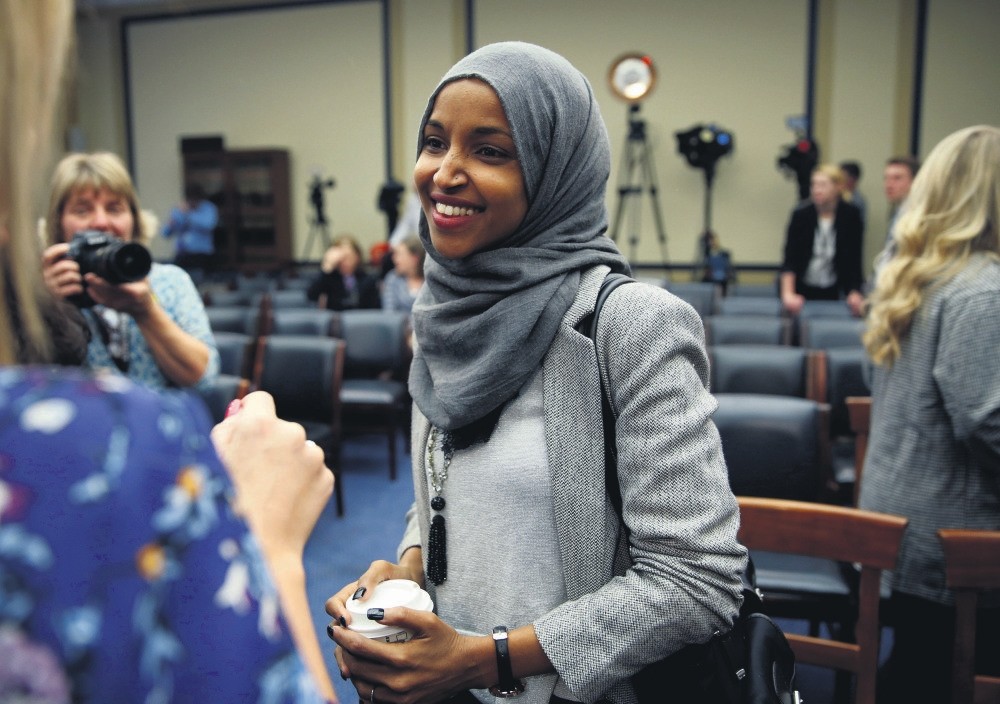 Representative-elect Ilhan Omar speaks to the media after a lottery for office assignments on Capitol Hill in Washington, Nov. 30.
by Hatem Bazian Dec 07, 2018 12:00 am

A week after the 2018 midterm election, Ilhan Omar, the newly elected U.S. Representative for Minnesota's 5th Congressional District, broke new political ground by expressing support for "the Boycott, Divestment, Sanctions (BDS) movement." Moreover, Congresswoman-elect Ilhan Omar expressed a readiness to oppose efforts to criminalize people who participate in the movement by saying, "I do not want to be part of a vote that limits the ability of people to fight towards that justice and peace." The newly elected congresswoman has managed to burst the American Israel Public Affairs Committee's (AIPAC) congressional bubble and will bring a new challenge to Israel's lobby that is more accustomed to cheerleading a legislative process than a meaningful debate on Israel's never-ending occupation, apartheid system and expansion of settlements.

In similar courageous fashion, Rashida Tlaib, the U.S. Representative-elect for Michigan's 13th Congressional District, took on AIPAC's most important strategy, namely sending fully funded congressional delegations to Israel, saying: "I do not think AIPAC provides a real, fair lens into this issue. It is one-sided… [They] have these lavish trips to Israel, but they do not show the side that I know is real, which is what's happening to my grandmother and what's happening to my family there." AIPAC-funded junkets to Israel are a rite of passage for both freshman and senior members of Congress and provide a view of the region through a distorted Israeli lens. The readiness for newly elected Congress members like Rashida and Ilhan to take on AIPAC head-on is indicative of a shift underway in the Democratic Party and by extension the country.

Israel lobby on the table

For a long time, Israel and Zionism operated as the third rail of U.S. politics, which was a sure path toward political suicide for any politician unschooled in the power of AIPAC, the Israel lobby. The readiness of Congresswoman-elect Omar and possibly others shortly to take a stand on the BDS movement, which up to this point was a taboo topic in the halls of power in America, illustrates the coming of age of a national shift that has been underway since the mid-1980s. Israel's standing and influence in the U.S. political system were untouchable and covered all parties and ideologies, but Omar's embrace of BDS and Tlaib's challenge to AIPAC's junket have been in the making for some years.

Congresswoman-elect Omar represents the arrival of a wave that will bring measurable change to the Israel question and how unconditional U.S. support for the Zionist state is no longer the case. Shifts in U.S. public opinion can be traced to Israel's invasion of Lebanon in the 1980s and the impact of images of death and destruction visited upon Palestinian and Lebanese populations. Israel's invasion of Lebanon and entry into the then ongoing Lebanese civil war culminated with Sharon's overseeing the Sabra and Shatila massacres.

Critically, Israel's invasion and intervention in Lebanon were given the green light by the U.S., which subsequently also oversaw negotiations to remove the Palestine Liberation Organization (PLO) from the country and provided American guarantees for Palestinian civilian safety. The Sabra and Shatila massacres took place after the U.S.' guarantees for Palestinian civilians who were left behind by the departing PLO, which for the first time created a visible crack in domestic public support for Israel. Subsequently, the U.S. deployed its forces in the country, resulting in disastrous consequences and the massive terrorist attack on the Marine barracks at the U.S. Embassy in Beirut.

The second crack in Israel's "Teflon shield" in U.S. politics came as a result of the 1987 Palestinian intifada, which streamed almost nonstop images of Israeli military brutality directed at a defenseless population. Prime Minister Yitzhak Rabin's order to break the bones of Palestinian protesters might sound great for the domestic and international Zionist crowd, but it had far-reaching impact, piercing Israel's invisible and well-manicured public relations image. In addition to the intifada images – and not to be underestimated – is the collapse of the apartheid system in South Africa and Nelson Mandela's embrace of the Palestinian cause on the international stage. The fact that Israel kept supporting and supplying arms to the apartheid system to its dying days, contributed to a severe and unrecoverable shift among the progressive forces that up to this point shied away from taking on Israel and Zionism directly.

The 1993 signing of the Oslo Accords can be examined from many vantage points, and I have done so in previous writing, but one aspect that must be added is that Israel's arrival at the negotiating table was a direct outcome of the aforementioned shift. It is important to remember that the U.S. removal of Saddam Hussein from Kuwait was coupled with a commitment to Arab states that a peaceful solution will be pursued immediately after the Operation Desert Storm campaign. In 1992, the U.S. sponsored the Madrid Conference, which ushered the Palestinian entry into negotiation rooms, even though it was under a Jordanian delegation; this process burst Israel's denial of the existence of Palestinians as a people and the existence of the occupation. The duplicity, foot-dragging and other disruptive strategies put forth by Israel are not to be ignored, but the mega-narrative that impacted public opinion should not be discounted either.

In 1994, Baruch Kopel Goldstein, an American-Israeli physician, committed the mass murder of 29 and wounded 129 Palestinian Muslim worshipers in the Ibrahimi Mosque in Al-Khalil (Hebron) during the month of Ramadan, an act that brought a further shift in American public opinion. A year later on Nov. 4, 1995, an Israeli right-winger assassinated Prime Minister Yitzhak Rabin, which further contributed to public opinion souring on Israel and its rising tide of right-wing politics. This period witnessed a real shift in public opinion and the emergence of a young college age population that had a more sympathetic attitude toward Palestinians and a negative one toward Israel. Indeed, the collapse of the Oslo agreement and the emergence of Netanyahu cemented the view of Israel as an aggressor and not committed to ending its occupation and dispossession of the Palestinians.

The post-9/11 period witnessed Israel's machinations in the U.S. and Europe to become the central actor in fighting the "war on terrorism" by providing its "expertise" and Islamophobic worldview as a model to follow. Here, the "war on terrorism" provided Netanyahu and Israeli leadership a clear path to bring about the total collapse of the Oslo peace process through the massive build-up of settlements, pushing the U.S. neoconservative movement to invade Iraq to secure Israel, unleashed the most violent episodes of repression of the Palestinians, undertook a disastrous military attack on Lebanon and four different assaults on Gaza. All of these amounted to cementing Israel's image as a bully and a state operating outside the norms of international law. Yes, the BDS movement registered success but don't underestimate the damage done by successive Israeli leaders that provided fertile grounds for public discourse on Palestine and the rights of the Palestinians.

The fact that U.S. politicians have not done anything so far to reflect changing attitudes has more to do with AIPAC's power and its effective electoral strategies that up to this point punished anyone that dared to speak outside the lobby's parameters. If the National Rifle Association (NRA) prevents open discussion and change on policy relative to the gun industry, AIPAC is far more effective than the NRA when it comes to protecting Israel and keeping the $3 billion-$4 billion annual U.S. foreign aid allocation flowing uninterrupted.

The end of the heyday

However, the winds of change are underway, and AIPAC will soon face the most severe test since the Democratic Party grassroots no longer have the same commitment to Israel. More importantly, the alliance between Netanyahu, Trump and the Republican Party's religious right wing has made Israel and Zionism a partisan issue. Critically, the success of a new crop of politicians to win elections without depending on AIPAC or big donors creates a level of independence not seen in U.S. politics in quite a long time. Tlaib, Omar, and others created their fundraising path and garnered support from diverse grassroots communities across the country, which has immediately translated into two crucial positions, the BDS front of Omar and Tlaib opting to challenge AIPAC's funded junkets to Israel. The days and months ahead will illustrate the erosion of AIPAC's and Israel's standing among the U.S. public. I believe that the recent shifts are irreversible. Israel's brand in the U.S. has run its course and already is beginning to reverse course after reaching its pinnacle.