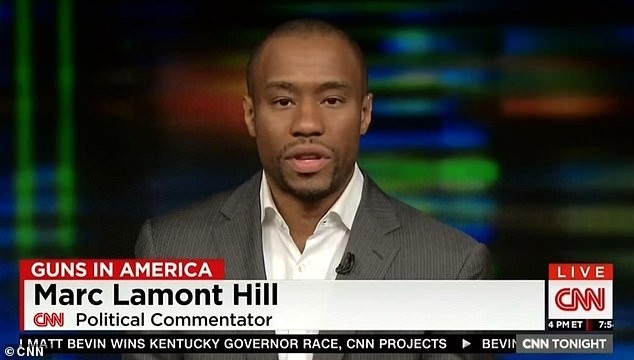 Professor Marc Lamont Hill, a Temple University professor and a commentator for CNN, delivers a speech on a live CNN program.
by Hatem Bazian Dec 17, 2018 12:00 am

Professor Marc Lamont Hill's departure from the mainstream media script, which centers Israel's concerns over that of justice, international law and the rights of the Palestinians, is what caused CNN to fire him and maintain support for the indefensible Zionist facade

Three days after the speech, CNN buckled to external pressure and fired Marc from his post as a commentator. Importantly, professor Hill delivered the speech at the Special Meeting of the Committee on the Exercise of the Inalienable Rights of the Palestinian People held on the occasion of the annual Nov. 29 International Day of Solidarity with the Palestinian people. Marc speaking truth in the halls of power is following in the best and well-respected tradition of African American leaders being the moral and ethical compass of the nation by giving voice to the voiceless.

CNN should celebrate Marc rather than censor and fire him for speaking at a time when everyone is being silenced on the subject. Punishing African Americans and people of color for speaking out is the norm rather than the exception in the U.S., and the treatment of quarterback Colin Kaepernick is a case in point if any was needed. Let's ask CNN how many journalists have Israeli snipers killed on the Gaza border and the West Bank in the last year alone and could you list their names, ages and provide anything about their background. It is undeniable that freedom of speech and freedom of the press have a Palestine checkpoint and exception to it, and only those that offer Israel's talking points are allowed airtime and newspaper space, with few exceptions.

In favor of Zionism

Critically, CNN's action sends a threatening message specifically to African Americans and leaders of color who express solidarity with Palestinians outside the confines of the Zionist vetted script – either you give in to media, speak in favor of Zionism and Israel or else you will lose your job. Important to remember that African American solidarity with Palestinians and vice versa goes all the way back to the 1960s as Malcolm X and members of the Black Panther Party went into exile in parts of the Arab World, helping set-up transnational links through this early work. The South African anti-apartheid struggle in the '70s, '80s and early '90s helped reignite and cement the relationship anew between activists of both communities. Indeed, the recent links between African American activists and Palestinians forged during the Ferguson protests helped propel a new era of cooperation and solidarity, which professor Marc Lamont Hill is part of. However, this relationship did not emerge out of a vacuum; instead, it was built upon a deep and complex reservoir of consciousness stitched together over generations and consolidated in real moments of hard-fought struggles.

CNN acting to punish and silence one of the few African American commentators on the national screen after an intensive campaign waged by pro-Israel forces and their allies targeting Marc is a spineless act.No less than the genocide and total annihilation of the Jewish people and supposed sympathy with Hamas' 1988 charter was the pro-Israel spin doctors swift and malicious attacks on Marc while calling CNN to fire him immediately. Israel's spin doctors took Marc's "from the river to the sea" concluding remark and framed it as a call for genocide and annihilation.

Indeed, the phrase "from the river to the sea, Palestine will be free" is a phrase pre-dating Hamas (formed 1986-87) and is a byproduct of the early 1960s Palestinian movement for liberation. The attempt to reduce it to Hamas inspired language is both reductionist and insulting for it fails to account for the complexity of Palestinian history from 1917 to the present. Palestinians have witnessed the dismantling of historical Palestine, the dispossession and expulsion of its population, a basic fact that is still unfolding daily under occupation, but this is not the central theme for CNN or anyone that is part of mainstream media speak. The dubious claim that a call for a free Palestine implies or reflects a call for genocide of the Jewish population, which is made to tarnish Palestinians, implies a spurious association with the horrors committed by Nazi Germany in WWII.

Pro-Israel and Zionist propaganda machinery in the U.S. and Europe are very well acquainted with using the Nazi Germany example as a frame to demonize Palestinians and their advocates. A call for Palestinian rights, freedom and equality are always equated by Zionist and pro-Israel spin doctors with Hitler's "Final Solution" and the claim that in reality what motivates pro-Palestine activists is a deep-seated and universal anti-Semitism and not any sense of redress for injustice committed against them. "From the river to the sea Palestine will be free" is translated by Zionist spin doctors as a call for a Final Solution emerging out of a rejection of the uniqueness of Zionist history and the establishment of Israel as a response and remedy to the horrors of WWII.

For a free Palestine

Furthermore, a Palestinian or someone advocating on behalf of Palestinians calling for a free Palestine from "the river to the sea" is translated as a rejection of Zionist Jewish self-determination, which is rightly exclusivist because of the imprint of ancient and contemporary history that rejected and challenged their essential humanness and equality. The charges are self-serving and attempt to silence the real and sustained critique of Zionism, which not only comes from Palestinians or African Americans, but increasingly, a sizable segment of the Jewish community is refusing and resisting the collapsing of Judaism, Zionism and Israel into an indistinguishable singularity. Opposing Israel and Zionism is not the same as anti-Semitism pure and simple.

Zionism and Israel, the propagandist asserts, should not be treated like any other nation-state or humanly constructed project; instead, it is the unique response to centuries of exclusion and torment that must be given free rein in dealing with an existential threat, the Palestinians who demand freedom and equality in their own land. Freedom, justice and equality for Palestinians, in the mind of Zionist and their supporters mean the end of the exclusivist Zionist-Jewish state. Here, Palestinians are standing in the way of Zionist progress or manifest destiny and the birth of a Zionist Jewish nation out of the bodies of the Holocaust.

Palestinians demanding their rights to their land, the right of return to their homes and calls for freedom are situated on the one hand opposite the ancient and contemporary history of Jewish suffering, and on the other, represent a deep-seated jealousy for the supposed success of Zionism in building a start-up, modern, militarily strong and innovative nation-state. A Dec. 5, 2018, op-ed by Palestinian academic Maha Nassar published in the Jewish Forward responded to this conflation and exaggeration by stating: "The belief that a 'free Palestine' would necessarily lead to the mass annihilation of Jewish Israelis is rooted in deeply racist and Islamophobic assumptions about who the Palestinians are and what they want."

Importantly, Zionism posits itself as the single and only response to ancient and contemporary Jewish suffering without making the possibility for a more complex and varied set of histories and settings. The projection and reduction of all Jewish history to that of the history and experiences of Jews in Europe does extreme disservice to Jewish and Muslim histories outside the confines of Europe's persistent and endemic anti-Semitism and Islamophobia. The calamity of Zionism is that it worked to reproduce Europe's worldview in Palestine both in relation to Jewish history and Orientalist visions of eastern Muslim subjects, which ironically includes the same view when it comes to all eastern Jews as well. Palestinians are represented both as classical anti-Semites in the European archetypal image and the backward, uncivilized and barbarian Orientalist subject foolishly rebuffing Zionist European progress and modernity.

Consequently, Zionists claim historical Palestine from the "river to the sea" through the implementation of Eretz Israel, the greater Israel vision, which is the current policy on the ground. The unfolding Eretz Israel plan undertaken by successive Zionist Israeli leaders has translated into exile, dispossession and daily torment for Palestinians inside all of historical Palestine. Palestinians face real and substantiated acts of genocide and never-ending documented war crimes daily in the process and the long road toward implementation of Eretz Israel, but no word is uttered or allowed to be uttered on CNN or any of the mainstream media outlets.

Had Marc said Zionism and Israel extend and have rights to the lands in Palestine from the "river to the sea," CNN and other media outlets would have celebrated this "enlightened" view and the readiness to challenge the "rising tide of anti-Semitism on the left" that supports the Boycott, Divestment, Sanctions (BDS) movement. The CNN corporation would have given Marc a new show by himself, and other media outlets would have given him a weekly op-ed space to possibly join the crowd regularly commenting on the uniqueness of Israel, Zionism and the often-used media speak of the right of Israel "to defend itself" opposite the occupied, defenseless and dispossessed Palestinian population. Precisely speaking, Marc's departure from the mainstream media script, which centers Israel's concerns over that of justice, international law and the rights of the Palestinians, is what caused CNN to fire Professor Hill and maintain support for the indefensible Zionist facade.