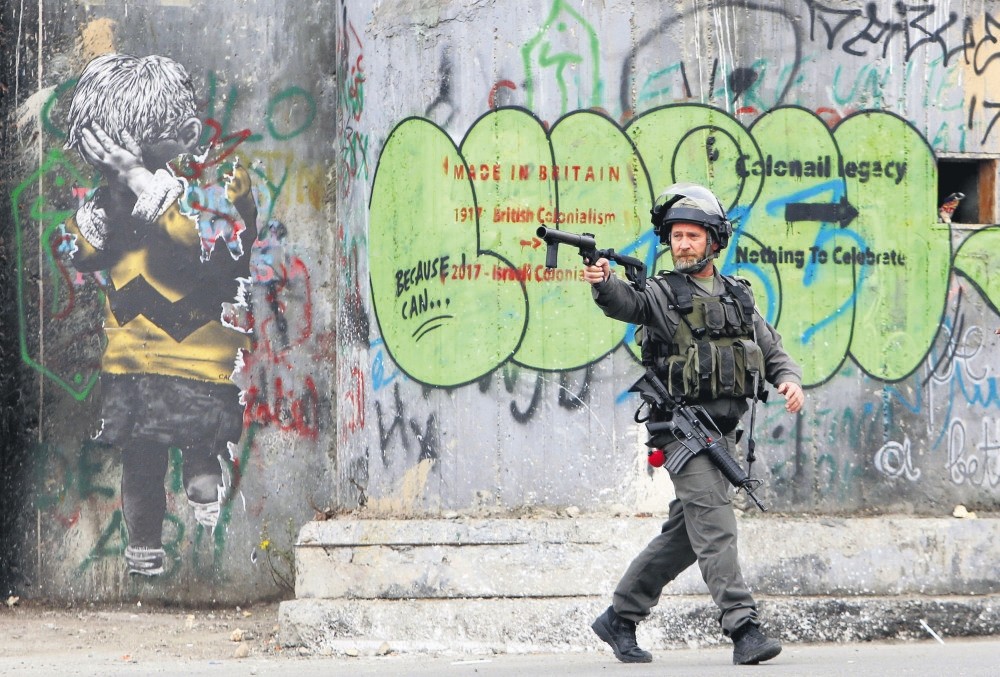 An Israeli police officer aims his weapon during clashes with Palestinian civilians, who are protesting against U.S. President Donald Trumpu2019s controversial decision to recognize Jerusalem as the capital of Israel, Bethlehem, Dec. 20, 2017.
by Hatem Bazian Jan 10, 2019 12:00 am

The well-established suffering of the Jews in various parts of Europe was used as a rationale to partner and become wedded with Britain's colonial plans in the Muslim world, which included from the beginning the idea of dispossessing the indigenous Palestinian population

Critically, Israel and the Zionist leaders are deeply connected to the extreme right wing and in some cases neo-Nazi groups across Europe, the U.S. and Latin America which undermines any claims of countering anti-Semitism by a state that is emboldening and providing legitimacy to groups, movements and individuals that belong in the dustbin of history.

Yet, and on a broader historical level, Zionism sought, from its inception, to link itself and find a partnership with the European and American right-wing power structures. Indeed, the early Zionists crafted the socialist or leftist kibbutz image that appealed to the post-World War II Western audience, which reflects a small part of the reality but at the same time managed to obfuscate the darker and more right-wing nature of Zionism itself. Israel's relations and engagement with right-wing forces is constitutive of Zionism and not incidental to it. Zionism, as a political ideology, and Israel, as the state beholden to the exclusivist nationalist strand of Zionism (not religious Zionism), forged a military garrison state, replicated Western racist norms and viewed itself as a European outpost facing "the barbarians" at the gates of civilization. Israel was born and nurtured within a right-wing, militaristic and exclusivist Eurocentric epistemic.

The Zionism is born in Palestine

The arrival of Zionism in Palestine was not by liberal and universal ideals; rather Theodor Herzl and his Zionist supporters became junior partners to imperial Great Britain and its plans in the Muslim world. The well-established suffering of the Jews in various parts of Europe was used as a rationale to partner and become wedded with Britain's colonial plans in the Muslim world, which included from the beginning the idea of dispossessing the indigenous Palestinian population. Zionism partnering with the powerful, and for sure the anti-Semites, in Great Britain and across Europe was often argued as being a mere marriage of convenience until the formation of the Zionist state, but the record post-establishment of the state illustrate otherwise. Israel and Zionism's embrace of right-wing political figures, movements and states is based on ideological affinity as well as serving some utilitarian functions.

Since Israel's founding in 1948, successive Zionist leaders and governments maintained and strengthened their partnership with imperial and colonial states. Yes, the presence of the political left and at a certain period, the prevalence of socialist strata in Israeli society did not translate by itself into an anti-imperial or anti-colonial movement on the ground, and for sure, not toward the Palestinians. It is a vexing matter that the socialist and leftist Zionists have yet to overcome their unwavering commitment to settler colonialism and embrace of Western militarism and imperialism.

The commitment of Israel and Zionism to the right-wing world political order is highlighted by them joining France's and Great Britain's colonial attack on Egypt in 1956 and Israel's deep commitment and institutional links to apartheid South Africa, which facilitated military training, weapon sales and common security measures that targeted African National Congress (ANC) activists on behalf of successive white supremacist governments in Pretoria. The cooperation with South Africa extended to the efforts of the U.S.-based Anti-Defamation League (ADL) that spied on anti-apartheid and South African activists in the U.S. and passed this information to the South African intelligence services.

Supporting South Africa's apartheid government was also coupled with engagement in the Angolan war and opting to line up on the side of the continuation of Portuguese colonies in Africa. Israel chose to align itself with fascist Portugal by arming the Portuguese army against the liberation movements in Mozambique and Angola but also by having an impact on Guinea-Bissau, Cape Verde, Sao Tome and Principe. The Israeli involvement in Angola was extensive as the National Front for the Liberation of Angola – a U.S. and Western-created counterinsurgency group – forces were trained in Israel and carried out in total partnership with the CIA and other Western powers. The entanglement with right-wing forces included the sustained partnership in Zaire, which is directly connected to the war in Angola on the one hand and, on the other hand, the broader strategy to maintaining postcolonial southern Africa in the hands of Western imperial interests.

A similar partnership with right-wing forces is well-documented in Latin America with Israel's involvement in providing military training for death squads – ANSESAL, the El Salvadorian secret police which formed the backbone of the infamous death squads that killed tens of thousands of civilian activists in the country – and low intensity warfare extended over a long period of time. One notable Salvadorian officer trained by the Israelis was Maj. Roberto D'Aubuisson, who always held a high opinion of the Israelis. It was Maj. D'Aubuisson who ordered the assassination of El Salvador's archbishop among thousands of other murders. Later, he would organize the right-wing National Republican Alliance Party (ARENA) and send his son to study abroad in the relative safety of Israel.

As early as the late 1950s and in many cases until today, Israel provided military training, weapons and tactical counterinsurgency know-how to Argentina, Bolivia, Brazil, Colombia, Costa Rica, Dominican Republic, Ecuador, El Salvador, Guatemala, Haiti, Honduras, Nicaragua, Panama, Paraguay, Peru and Venezuela. Israel's support for Argentina's fascist and deeply anti-Semitic military government in the 1970s stands not as an exception but as the norm for Zionism. Israel's involvement in Guatemala was possibly the bloodiest and most destructive and included a systematic effort in a "pacification" campaign, which the Guatemalan President Carlos Arana commented upon in 1971, saying: "If it is necessary to turn the country into a cemetery in order to pacify it, I will not hesitate to do so."

Israel's involvement with right-wing forces in Guatemala was structural and systematic and included supplying the country with the Israeli-made Galil rifles and building an ammunition factory for them, as well as supplying armored personnel carriers and Arava planes. It was Israeli military trainers who also operated as sub-contractors for the CIA. Behind the scenes, they were actively involved in the bloodiest counter-insurgency campaign the hemisphere has known since the European conquest, in which at least 200,000 (mostly Indians) were killed.

Israel's involvement in Asia follows a similar pattern of partnership with right-wing forces. The list of countries includes the strong alliance and strategic partnership with the Shah of Iran, the current relationship with India's right-wing Hindu nationalist Bharatiya Janata Party (BJP) government, and military sales and training to the Myanmar military regime engaged in war crimes and ethnic cleansing.

Israel and its leaders are committed to a right-wing, settler colonial, and increasingly fascistic political worldview. The ongoing relations with right-wing forces in the U.S., Europe, Latin America, Asia and parts of Africa reflect the continuity of a foundational and ideological norm rather than an aberration. "For Netanyahu and his American friends, criticizing Israel is the only anti-Semitism that matters" wrote Joshua Keating in his Dec. 6, 2018 article in Slate reflecting the most accurate description of the organized American Zionist community.

The current debates and attacks on Palestine activists on the basis of anti-Semitism are self-serving and intended to defend the indefensible in Israel and Zionist conduct toward the Palestinians. If the claims made by the ADL, the American Jewish Committee (AJC), the Zionist Organization of America (ZOA), the Jewish Community Relations Council (JCRC) and Jewish federations across the country are that they are fighting and countering anti-Semitism, then the evidence of this intent should be a clear and definitive condemnation of Israel's and Netanyahu's actions that legitimize the new crop of neo-Nazi and ultranationalist politicians. The lack of any sustained criticism by major Jewish organizations of Donald Trump and the use of anti-Semitic tropes in the most recent midterm elections is a failure of moral leadership on the anti-Semitism front. Failure to condemn Trump and right-wing politicians on a regular and consistent basis can only mean an agreement with the approach and decisions taken by Israel and its leadership.

I disagree with the J Street nonprofit organization on some issues, however, Jeremy Ben-Ami's view on this matter is very accurate and reflects the increasing alarm among a sizable segment of the American Jewish community. A Washington Post article by Ishaan Tharoor provided Ben-Ami's perspective on the issue: "It's extremely disturbing that Prime Minister Netanyahu and the Israeli government are embracing right-wing leaders with xenophobic ideologies and authoritarian leanings – and providing cover for those leaders' anti-Semitic dog whistles and affiliations… In their zeal to maintain the occupation and reject all criticism of its policies towards the Palestinians, the Israeli right clearly feels a kinship with other ultranationalist leaders who are demonizing ethnic minorities, civil society groups, and democratic institutions… By standing with the likes of Viktor Orban and Matteo Salvini, the Israeli government is ignoring the deep concerns of European Jewish leaders and forgetting the historical lesson that any government which targets minorities and undermines liberal democracy is ultimately a threat to the Jewish people."