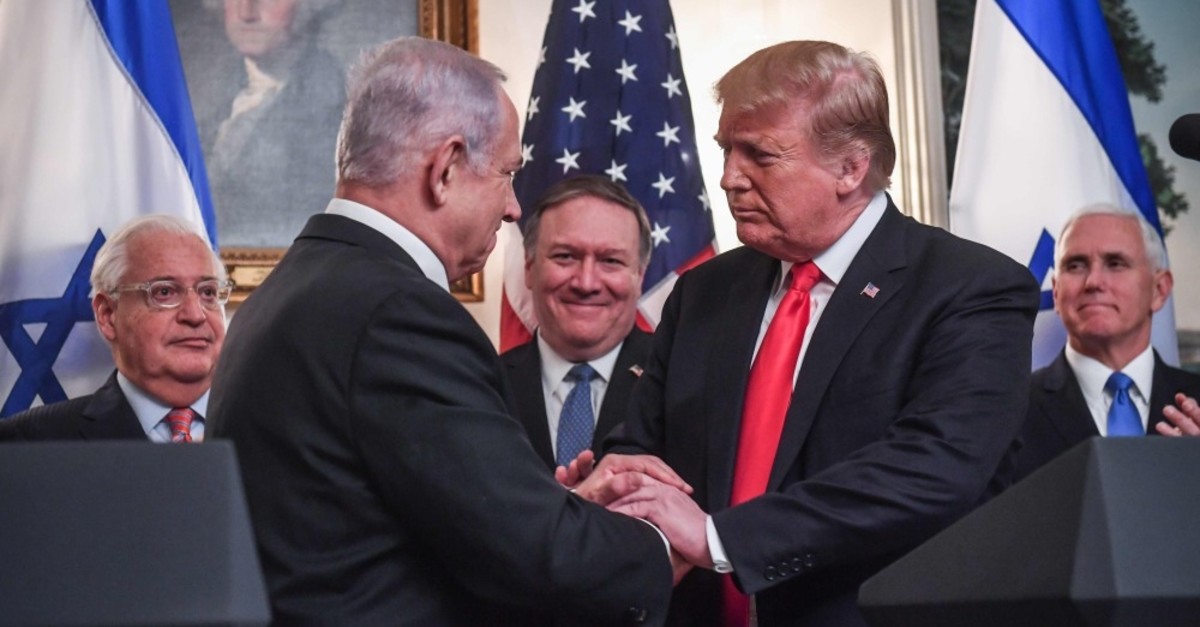 Palestinians welcome all who love and yearn to live in peace built upon justice, equality and dignity; but colonialists and self-appointed masters will be resisted

On March 21, U.S. President Donald Trump posted the following statement on Twitter, "After 52 years it is time for the United States to fully recognize Israel's sovereignty over the Golan Heights, which is of critical strategic and security importance to the state of Israel and regional stability!" Trump's unilateral recognition of Israel's annexation of the Golan Heights, an illegal act by international law, is a very significant development in the road toward a one-state solution, an apartheid Zionist one for sure.

The full declaration was signed by Trump on Monday, March 25, stating that the president "does hereby proclaim that, the United States recognizes that the Golan Heights are part of the State of Israel." Benjamin Netanyahu's dream and Zionist steady stomp toward "Eretz Israel, the greater Israel," from the river to the sea, is finally within grasp and only the West Bank is left or "Judea and Samaria," for those suffering from deep denial that Palestinians and the Occupation actually exist.

Trump's rationale for the recognition is a dim-witted affair that deserves analysis and illustrates the total surrender of U.S. policy to Netanyahu's right-wing hacks inside and outside the current administration. Trump's stated rationale for recognition is the supposed "aggressive acts by Iran and terrorist groups, including Hezbollah, in southern Syria," which according to the signed declaration "continue to make the Golan Heights a potential launching ground for attacks on Israel." The winding down of the Syrian war and the total weakness of the Syrian and Lebanese governments are opportunities that have been seized upon by Netanyahu and all his right-wing allies in the current administration. This is a U.S. policy crafted and put into effect by Netanyahu's team, and Trump is daft to the short- and long-term consequences, even if one accepts the possibility that he has taken the time to read the briefing and background documents prepared for him on the matter.

At a time when Syria's infrastructure has been destroyed, the country fragmented and been set back 50 years on any scale of development with over 800,000 killed, millions internally displaced and 5-7 millions refugees, the president uses the fig leaf of a threat to cement wholesale settler colonial thievery. Recognition is not about a security threat, but daylight highway robbery that has been underway for 52 years and needed a foreign policy scatter-brained president to get it completed and "legalized."

Here, Trump is transactional in moving the U.S. Embassy to Jerusalem, recognition of the Golan and the possibility of accepting the annexation of chunks of the West Bank with a strategy focused on positioning himself for the 2020 election cycle. The electoral strategy will center on highlighting Trump's commitment to Israel and use it to rally the evangelical Christian right, as well as drive financial contributions and organizing capacities of hardcore right-wing Zionists to his campaign, which will translate into votes at the ballot box.

The re-alignment underway in the Democratic Party, the increasing gulf between the rank and file membership and the party leadership on the status quo of unconditional support for Israel, is the opportunity that Trump is attempting to exploit for the 2020 election cycle. Trump's moves on the Israeli file are measured with an eye for the 2020 election cycle and his belief that the evangelicals and the right-wing Zionist alliance will carry him into a second term. All politics is local, and Trump's actions follow in the footsteps of Truman's recognition of Israel back in the 1948 election cycle.

Significantly, the U.S. recognition of the annexation of the Golan Heights will accelerate the move toward annexation of big chunks of the West Bank, which is only a matter of time. The cast of characters in Washington and Tel Aviv point to a rapid move to bring an end-game to the Palestine file, the so-called "Deal of the Century," an outcome that does not include a sovereign Palestinian state or even expanded autonomy for Palestinians. It is important to recall the pure Zionist absurdity, which Israel and its many supporters hold onto, which does not consider or recognize the West Bank or any part of Palestine as occupied. At times they resort to the "polite" description of "disputed territories," which still is Israel and Zionist speak for not referring to it as occupied.

The basic fact is that we have arrived at a one-state solution, a Zionist one that has some five million or more Palestinians and non-Jewish population. Indeed, Netanyahu and his right-wing allies would love to wish the Palestinian despair overnight, maybe Bibi hopes for another Tiananmen Square style event to bring this about, but it is difficult to move five million or more civilians out of their homelands. Yes, the simple Zionist daydream answer, which originates in Herzl's ideas, is to "spirit the penniless"

population across the river and has Jordan as the alternative homeland for the Palestinians. The colonial idea was fashionable in 1902 or even 1948, considering it was halfway accomplished in the Nakba, but today's circumstances and conditions are vastly different. Even if this deeply held Zionist colonial daydream is accomplished, and Netanyahu and his allies move the five million Palestinians to Jordan then what will happen with a collapsed state on the "Eretz Israel" eastern border.

The problem of the 'solution'

Indeed, Trump and Netanyahu, the gang of two that cannot shoot strategically straight, have brought the world to a one-state solution, an apartheid Zionist one with all the trappings of racism, discriminatory laws, a pernicious land grabbing settler movement and triumphant militarism. The fundamental question that haunted the Zionists of old remains un-addressed: what to do with the Palestinian population? The question was present when Herzl embraced settler colonialism in 1897 and is with Netanyahu's Israel today. Settler colonialism always has had a racist demographic question, and Zionism is no different.

In response to critical comments from the Israeli actor, Rotem Sela, Netanyahu made it abundantly clear that "Israel is not a state of all its citizens," and "according to the basic nationality law we passed, Israel is the nation-state of the Jewish people – and only it." Israel long ago moved toward a de jure apartheid system inside 1948 and now in all of historical Palestine, which accords rights not on the basis of equality of all citizens, but the religious and ethnic background of a given member of the polity. "Israel is not a state of all its citizens" means that all citizens are not vested with the same constitutive powers and rights accrued thereof from being members of the polity.

The "Israel is not a state of all its citizens" idea is understood to be in effect in all of the 1948 areas as well as any location where Israeli Jewish nationals are present within historical Palestine. Thus, the annexation of the Golan Heights brings the same de jure dynamics into lands occupied in 1967 and extends the apartheid system into these

territories. A shift from military occupation into an apartheid system will not solve any of the outstanding issues; instead, it will only delay and complicate Israel's problems and further erode its standing globally: Canary Mission, the Psy-Group and Hasbara networks will not be sufficient to rescue a rotten brand, legally and structurally vested in apartheid. "Brand Israel" has cemented the apartheid label with this annexation and celebration of Trump's declaration and embrace will translate down the line into sticky muck that is not easily washable by an American Israel Public Affairs Committee (AIPAC), Anti-Defamation League (ADL), American Jewish Committee (AJC), Zionist Organization of America (ZOA) or other public relations firms. The Israeli apartheid train has departed the station while all of the Zionist groups have celebrated and lobbied for it every step of the way, with only a few exceptions.

Trump's declaration brings clarity to all those who aspire for one state that is rooted in equality, justice, universal human rights and dignity for all. Contrary to AIPAC and other major Zionist organizations, annexing an internationally recognized occupied and stolen land does not convey legitimacy

nor resolves existing claims. Peace based on justice for the Palestinians cannot be cheaply wished away by Netanyahu, Trump or successive Israeli or American administrations. Fundamental rights have not been resolved, and Palestinian refugees are returning to historical Palestine sooner than later. Palestinians welcome all who love and yearn to live in a peace built upon justice, equality and dignity; all are embraced, as brothers and sisters to the Palestinians, but colonialists and self-appointed masters will be resisted.