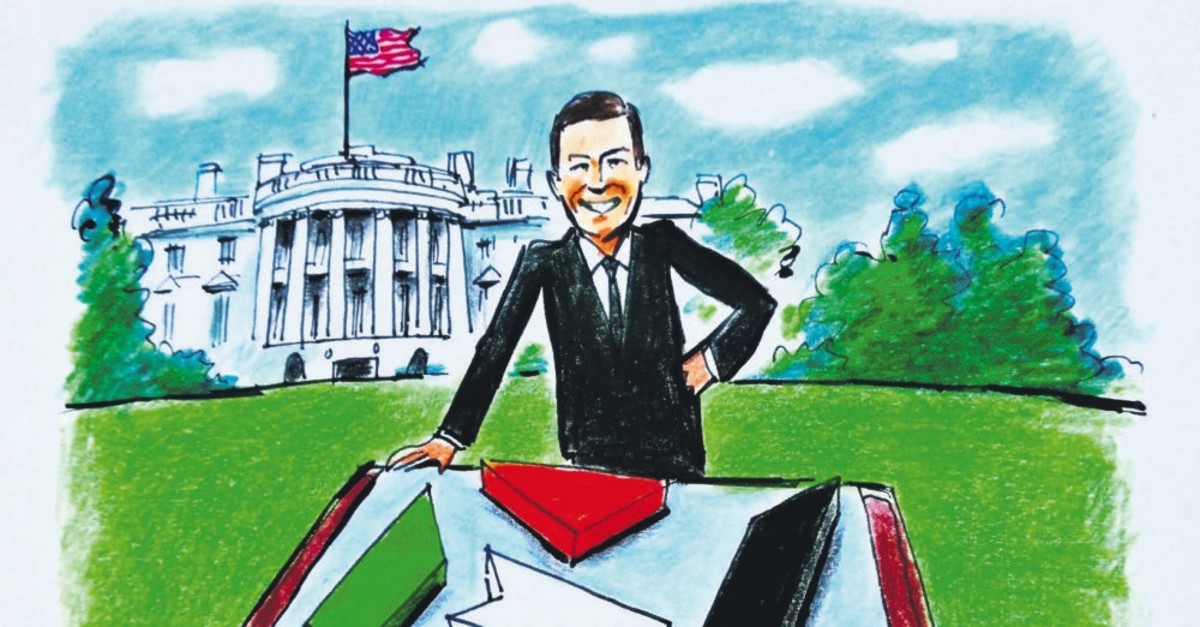 If the world is looking for a secure and social justice-based investment and prosperity, then make sure to ask everyone to put their trust in Palestinians and their journey toward decolonization

A Twitter thread by the Economist Middle East correspondent Gregg Carlstrom provided all the needed context on Bahrain's workshop which was supposedly intended to focus on Palestine but without the Palestinians themselves attending; alas, the Balfour Declaration anew.

"There's a lot of money in this room," was a comment by U.S. Secretary of Treasury Steven Mnuchin, adding, "I'm confident we'll get the first $4 billion fast" and that it "will be like a hot IPO." Correctly, Carlstrom observed, "it's like they've all agreed to just pretend the conflict is already over."

President Donald Trump and Jared Kushner's "Peace to Prosperity Workshop" held in Bahrain on June 25-26 was a $50 billion dollar "IPO" or "auction," the purpose of which is setting up a golden cage for the Palestinians.

The plan, or more accurately, the "auction," is framed as a "necessary precondition to resolving the previously unsolvable political issues," which was billed by Trump and Kushner as the "opportunity of the century" for the Palestinians.

The Palestinians did not bother sending a delegation since the "workshop" was intended to bypass the key issues that prevent development and prosperity, such as the Israeli settler-colonial occupation, right of return, Jerusalem and sovereignty.

More or less, the U.S.-sponsored Bahrain workshop is another piece in the long puzzle to normalizing Israel and Zionism in the Arab and Muslim world without arriving at a peace treaty, ending settler colonialism, or accepting Palestinian sovereignty over their land.

The Zionist delegates included Rabbis Marvin Hier and Abraham Cooper, from the Simon Wiesenthal Center; Rabbi Marc Schneier, an adviser for interfaith affairs to the king of Bahrain; Montreal-based Rabbi Mayer Gniwisch, the owner of a venture capital fund that invests in Israel; Yitzhak Kreiss, head of the Sheba Medical Center in central Israel; and one rabbi who requested to remain unnamed.

Additionally, they included Arab finance ministers, investors, the presidents of the World Bank and FIFA, and a host of other self-appointed diplomats with no role other than to barter away Palestine and Palestinian rights.

Trump and Kushner's Palestine "IPO" is a $50 billion roadshow, a Wall Street mid-cap size company – for sure not a large one, but enough to make a few wealthy men (women need not apply) under occupation.

The Palestinians will have $28 billion, and $9 billion is reserved for Egypt while Jordan and Lebanon get $7.5 billion and $6 billion, respectively. The kicker in Kushner's plan is that the Arab world will be responsible for funding this financial hoax, as well as the expectation for the Palestinians to take on debt and loans to fund specific tourism projects.

Israel and Zionism will have a first-class settler-colonial project, and they will get others to pay for it. Here, Israel not only gets to continue to steal Palestinian lands, expel the indigenous population, take their homes, cities and farms and rob natural resources; it also gets rewarded for it and has Arab states assist in cementing the trans-generational dispossession. One must be alive to have outrage over such a plan, and more so when an Arab capital hosts the meeting, thus adding insult to injury.

Blaming the victims of settler colonialism is the favorite past-time for Israeli, American and increasingly, Arab politicians, who never miss an opportunity to heave insults on the Palestinians for their ongoing dispossession.

While Israeli and American politicians have been at it for a long time, the arrival of a whole bunch of Arab political figures that are willing and ready to blame, attack and scheme against the Palestinians in the hope of securing their seats of power is a new fad.

Arab and Muslim Zionists are running all over the region and their favorite pastime is to blame the Palestinians for their ongoing predicament. Palestinians being occupied and facing colonization is not a shame, but standing against them while they are facing and resisting Zionist settler colonialism is the highest form of cowardice and is the real dishonor.

This "IPO" sounds great until we consider the critical missing issue, the ongoing occupation and Israel's view that the West Bank is a disputed territory, which translates to supporting settlements and uprooting Palestinians from their own homes and land. "Property and contract rights" are meaningless in the face of an occupation and settler colonialism and the need first to affirm sovereignty before the mirage of development and prosperity.

Kushner's plan uses the euphemism of "EMPOWER THE PALESTINIAN PEOPLE" without addressing the reasons why we are speaking of the need for empowerment in the first place – the Nakba and the ongoing occupation.

Here, referencing "data-driven, outcomes-based education options at home, expanded online education platforms, increased vocational and technical training, and the prospect of international exchanges, this initiative will enhance and expand a variety of programs that directly improve the well-being of the Palestinian people" is an insult to intelligence.

The framing by Kushner and his team implies that the Palestinians have not been attempting to work on all these fronts, but are always facing Israel checkpoints, attacks on educational institutions and constant violence by settlers.

"It will strengthen the Palestinian educational system and ensure that students can fulfill their academic goals and be prepared for the workforce" was the plan's framing of the outcome, but it completely disregards the monumental accomplishment of the Palestinians under the most severe Israeli strangulation. It is the occupation and settler colonialism that undermines Palestinian empowerment!

"ENHANCE PALESTINIAN GOVERNANCE," was the "Peace to Prosperity" plan's third aspect, which calls for "improving the public sector's ability to serve its citizens and enable private sector growth." Now if this idea is not laughable, then nothing else will be for anyone that knows of the birth of the Palestinian Authority and the involvement of the U.S., Israel and Arab countries in fostering and rewarding corruption by design.

Where was all this concern for "upholding property rights, improving the legal and regulatory framework for businesses, adopting a growth-oriented, enforceable tax structure and developing robust capital markets" since the signing of the Oslo Agreement in 1993 and the outright theft of Palestinian lands by Israel and its settlers?

Maybe Kushner and U.S. Ambassador David Friedman could help Palestinians uphold "property rights" by apologizing first for funding and empowering the building of settlements in total disregard for international law and second for insulting our collective intelligence that this plan represents anything other than Netanyahu's dream of revoking Palestinian sovereignty.

More offensive is Kushner's call for "A fair and independent judicial branch" without defending Palestinian rights under occupation; instead, to "ensure this pro-growth environment is protected and that civil society flourishes" at the expense of sovereignty and political rights.

This envisages "international partners" assigned the task of eliminating "the Palestinian public sector's donor dependency and put the Palestinians on a trajectory to achieve long-term fiscal sustainability," but nowhere in the plan is the cause of this reliance addressed.

As if looking at Palestine from Mars, Kushner asserts that "this initiative can usher in a new era of freedom and opportunity for the Palestinian people and institutionalize the policies required for successful economic transformation," but again misses the existing dichotomy between occupation and freedom.

The plan is an economic engine envisaged by Benjamin Netanyahu to replace sovereignty, political rights and freedom from occupation and settler colonialism, which for Palestinians is dead on arrival.

The plan reads like a freshman paper with a PowerPoint presentation filled with buzz words intended to dazzle the eyes while making sure everyone suspends the thinking process. A big list of buzz words includes: "UNLEASHING ECONOMIC POTENTIAL," "OPENING THE WEST BANK AND GAZA," "CONSTRUCTING ESSENTIAL INFRASTRUCTURE," "PROMOTING PRIVATE SECTOR GROWTH," and "STRENGTHENING REGIONAL DEVELOPMENT AND INTEGRATION," which are meaningless if the occupation and the stateless nature of Palestinian society remain unaddressed.

At the root of Kushner's plan, like many others like it, is the attempt to bypass and prevent Palestinian political empowerment and self-determination. "Capital raised through this international effort will be placed into a new fund administered by an established multilateral development bank" is the new version of the British Mandate, which made sure then to never permit Palestinian self-determination from taking hold while all along empowering Zionism in historical Palestine.

The idea that Palestinians are not ready to govern themselves is the highest form of colonial discourse, and embedded in it is the arrogance and racism of colonizers and all their enablers. Palestinian self-determination, freedom and dignity will not come through Kushner's "hot IPO" or Arab and Israeli machinations to build a new war on Iran, but it will for sure manifest itself as a sustained anti-colonial struggle that will usher a new horizon sooner than later.

If the world is looking for a secure and social justice-based investment and prosperity, then make sure to ask everyone to put their trust in Palestinians and their journey toward decolonization. All are welcome on the path!