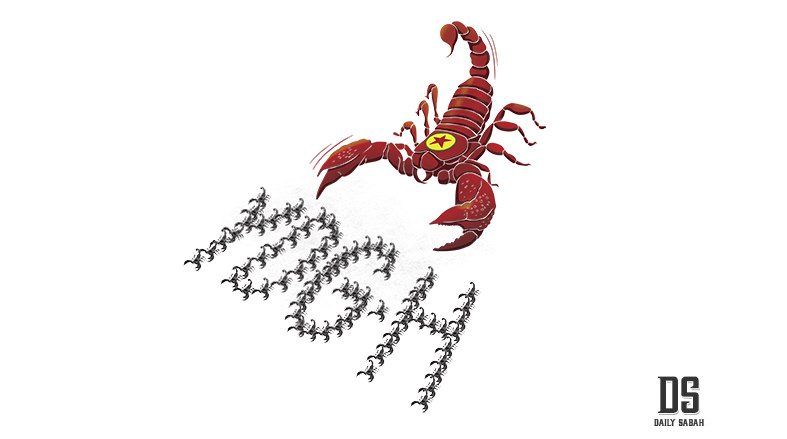 Members of the PKK's urban armed youth group, the YDG-H, are first raised amid Kurdish nationalist propaganda, then sent to their hometowns by the PKK as fully equipped militants to organize terrorist attacks such as making arbitrary road stops, digging ditches in civilian-populated streets and placing bombs in them, et cetera

The PKK has been theorizing a "people's revolutionary war" for at least five years. According to that, the war should not be against military officers in the mountains anymore, but against security forces in urban areas. The PKK estimates that through this way, the distance between the public and the state will tip the scales in its favor and the public, which has negative impressions of the security forces due to past policies, will support the organization with an uprising.

The Patriotic Revolutionary Youth Movement (YDG-H), which can be likened to Mussolini's Black Shirts, is the PKK's urban youth armed group founded with this aim on Feb. 25, 2013. Raising Kurdish youth with ideological propaganda first, the PKK sent the youth back to their hometowns as fully-equipped terrorists after giving them military training in their camps. In April 2013, with the recess of the PKK's armed units in the mountains upon the call of the PKK's imprisoned leader, Abdullah Öcalan, YDG-H militants were positioned in urban areas in place of the mountain-based militants who were withdrawn. As the PKK completely ceased pulling back with the Gezi Park riots, the state came to be confronted with two illegal armed organizations, one in the mountains and the other in cities. The state shut its eyes to this course of events for two years for the sake of maintaining the reconciliation process.

Last year between Oct. 6 and Oct. 8, the YDG-H started an uprising on the pretext of solidarity with Kobani, which resulted in the deaths of 52 civilians during the incidents. Through this, it announced its label for the first time by terrorizing the region. Parallel to this, Murat Karayılan, a senior PKK figure, also said in an interview that the YDG-H gained "a great victory" during the Oct.6-8 uprisings.

The state started fighting the YDG-H in Cizre, which is not a coincidence since the YDG-H was founded in this town and the town was also used as a coordination center. It was known that the PKK had considerable armories in Cizre. The state wanted to take measures against possible PKK assaults in other areas by preventing the usage of arsenals and militants in the town. Although the YDG-H and PKK reflected the state intervention in Cizre as an unlawful practice, the remarks of a YDG-H member who gave an interview to France24 prove that the state was confronted with an armed militia and did not target civilians, but only militants. "The majority of our killed friends had rifles; we did not have heavy weapons. We tried to conduct our demonstrations with bombs."

The YDG-H is an organization responsible for many violent acts such as throwing Molotov cocktails, digging ditches in streets where civilians live and placing bombs in them, seizing people's houses by force, setting fire to commercial vehicles, opening fire on ambulances, making arbitrary road stops and killing security forces and Kurds who do not support the PKK as a warning to others.

As the Republic of Turkey has to pay attention to distinguish civilians from terrorists while conducting this fight, the press also has to highlight that the state is confronted with not a civilian human rights organization, but an armed militant group that assaults all sorts of human rights, including the right to live, because facts matter.
Last Update: Sep 23, 2015 1:33 am
RELATED TOPICS