My expectations of the G20 summit 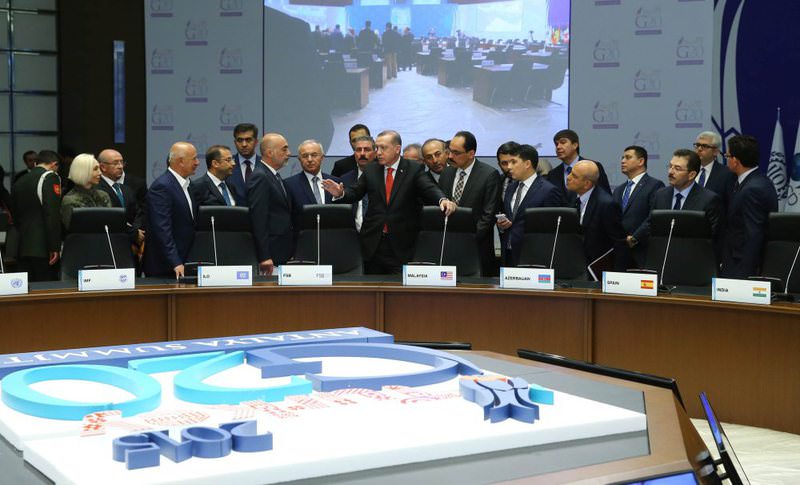 President Erdou011fan went to Turkey's popular resort city Antalya, where the G20 Summit will be hosted, to check preparations.
by Hilal Kaplan
Nov 13, 2015 12:00 am

The leaders of G20 countries, which make up 85 percent of the world economy and 65 percent of the world's population, are scheduled to meet in Turkey over the weekend. Turkey took over the rotating G20 presidency in December 2014 and will transfer it to China following the G20 summit. Turkey has broken fresh ground in many fields during this one-year term. For instance, more than 70 official meetings were held between G20 countries' finance, labor, energy and agriculture ministries in this period.During its presidency, Turkey also pioneered the establishment of six initiative groups of the business community and unions, which operate as nongovernmental organizations. The four outreach meetings called the Youth 20 (Y20), Women 20 (W20), Business 20 (B20) and Labor 20 (L20) have also prepared to voice their own concerns at the G20 summit.

The main program of the summit is outlined as the three "I"s, corresponding to the three main topics of inclusiveness, implementation and investment that are required to attain strong, sustainable and balanced growth. These topics aim to strengthen the global economy and make it inclusive, make development sustainable, supervise whether decisions are implemented both on national and international levels and boost investments.

As a result of a joint decision made by all G20 leaders, they will convene for a working dinner on Nov. 15 to address the intensifying refugee crisis and global terrorism. Turkey became one of the latest targets of global terrorism in the twin suicide bombing the Islamic State of Iraq and al-Sham (ISIS) carried out in Ankara on Oct. 10. Turkey is going through hard times due to terrorists and incidents taking place on its nearly 1,000-kilometersouthern border, so it is not surprising that ISIS is one of the primary political concerns on Turkey's agenda. Also, it is no secret that Turkey, which has seen over 140 civilians and security officers fall victim to PKK terror over the past three months, has prepared to pressure some foreign states that tolerate the PKK.

The refugee problem will be one of the inevitable political topics discussed at the summit. There are more than 2 million Syrian refugees in Turkey at the moment and this migrant population will continue to rise as long as the Syrian crisis persists. This is no longer a burden that Turkey can shoulder. I think G20 countries will make important decisions on what can be done on the matter.

Consequently, as a woman, I must say that I have high expectations of the W20 initiative group, which was established under the aegis of President Recep Tayyip Erdoğan with the objective to increase businesswomen's contribution to the global economy. I want this formation to be of great importance and further developed by subsequent G20 presidents.
Last Update: Nov 13, 2015 2:21 am