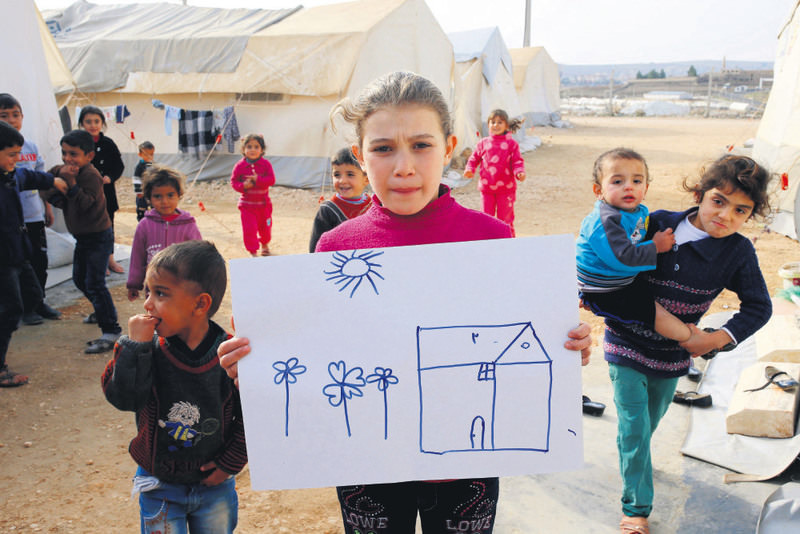 Syrian refugee girl Rahaf Hasan, 10, in Turkey's Midyat refugee camp in Mardin province, poses as she holds a sketch of her home in Syria.
by Hilal Kaplan Jan 22, 2016 12:00 am

Morals are principles of which presence gains meaning and value when it is tested, mostly in times of crises. Any formation can be claimed to be moral unless it is tested. Today, many people from a number of countries, particularly from Syria, flock to Europe and test Europe's moral conscience.

There was a total of 490 attacks on shelters for Syrian refugees in Germany within only two months last year. Neo-Nazis and extreme rightists, who have come to not so easily be distinguished from one another, demonstrate against refugees and shout racist slogans almost every week. German Chancellor Angela Merkel has come under fire from all sides as she adopts a more refugee-friendly attitude than other European leaders.

British Prime Minister David Cameron recently said that "conservative religious practices" help radicalization - a statement that has brought all religious Muslims under suspicion. He made this statement even though studies that elaborate on the characteristics of those from Europe who join DAESH have found that they had rather secular instead of religious life styles. Cameron also said that Muslim refugee mothers who do not have a good command of English might be deported even if their children are British citizens. I think Cameron, and his suggesting of learn English or leave, must be reminded of the footage showing DAESH cutthroats who are native English speakers and who speak English with a perfect British accent.

Denmark and Switzerland are enacting laws that are aimed at confiscating the valuables and financial assets of Syrian refugees who escape death with their children and take refuge under wretched circumstances in these countries. The U.N. High Commissioner for Refugees called these draft laws an arbitrary interference to the dignity and privacy rights of refugees. Former chief rabbi of Denmark, Bent Melchior, displayed a more meaningful reaction, saying that these proposed laws "had the character of what was actually in force during the Nazis' persecution of minorities."

I am not writing this from France, which immediately closed its borders after a terrorist attack and declared a state of emergency for three months. Rather, I am calling on Europe from Turkey, which has taken in nearly 3 million refugees although it suffered five big terrorist attacks in Reyhanlı, Diyarbakır, Suruç, Ankara and Istanbul over the past three years. Turkey, which is the country hosting the greatest number of refugees in the 21st century, has the longest border with Syria where the civil war has been continuing for almost five years. Despite all this and its ongoing struggle with the PKK, which has killed hundreds of civilians and security staff in the country, Turkey has not closed its doors to refugees.

The upcoming process will show us whether Europe really has the moral values that it claims to embrace. Europe suspends the law, morality, democracy and civil liberties when it runs into trouble or faces an unfavorable situation that does not suit its book. This being the case, Europe cannot teach a lesson in morality to the world, as it is not superior to the rest of the world in terms of morality.
Last Update: Jan 22, 2016 8:49 am
RELATED TOPICS