Will Turkey intervene in Syria? 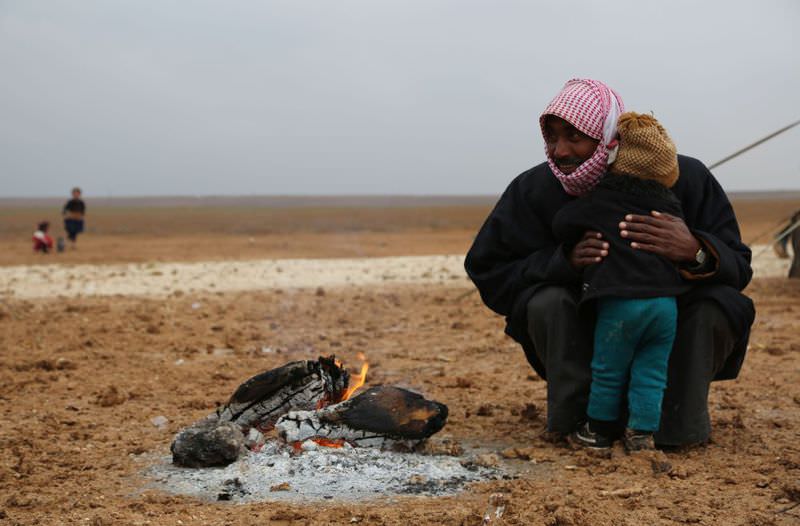 An Iraqi refugee and his child who fled the northern city of Mosul, now held by DAESH, pictured in a new camp on the outskirts of Syrian town Ras al-Ain, near the border with Turkey.
by Hilal Kaplan Feb 05, 2016 12:00 am

NATO member Turkey is being isolated by other NATO member countries while its national security is under threat by various terror groups such as DAESH, the PKK and PYD

As part of the post-World War II order, I am not sure whether we have experienced a period in which the term "U.S.-backed" has lost its sense to such an extent.

In Syria, the United States currently cannot stand behind any U.S.-backed group except the People's Protection Units (YPG), whose strategic partnership with Russia could not be prevented. The U.S. can neither train and equip groups, nor prevent the massacres caused by Russian airstrikes. On Wednesday, the connections of opposition groups from Azaz to Aleppo, and consequently with Turkey, were cut off by the Russia-backed regime of Syrian President Bashar Assad, which brought the reality to light even more.

In the face of this situation, which marks the most distinct and definite victory of Russia over the course of its four-month invasion in Syria, Pentagon spokesman Col. Steve Warren said: "The Russians at this point have made it very clear that their offensive operations ... are in support of Bashar Assad and his regime." They finally realized it!

The Geneva negotiations have also come to a deadlock due to the Russia-backed Assad regime, and it has become definite that they will yield no positive results unless the game of military domination is stopped. To put it another way, it has become clear once again that a diplomatic solution in Syria can be achieved only through a military solution.

Meanwhile, NATO member Turkey could not find a genuine ally and was left alone, although it has faced many security threats posed by the outlawed PKK, its offshoot YPG and Russia.

Despite that, in Geneva, where Russia has served as the most significant crutch for Assad, remarks made by Turkey and Saudi Arabia have marked the greatest support for the opposition. Foreign Minister Mevlüt Çavuşoğlu said the opposition had the right to leave the meetings, as its conditions were not met. Prime Minister Ahmet Davutoğlu was in Saudi Arabia at that time, and the two countries repeated together that they side with the opposition. Another interesting aspect of the meetings was that the Turkish Chief of General Staff, who attended the meeting in Riyadh at the invitation of his Saudi counterpart, was in uniform during the meeting, in which Saudi Arabia's King Salman was also present.

The following day, Russia declared that it would implement new rules of engagement on the Turkish-Syrian border and would hit Turkish jets attempting to cross it. Russia's announcement of a set of rules for the border of other countries provides enough evidence for the idea that Russia has occupied Syria.

When the field is regarded, it can be seen that the U.S. continues to give a red light to the YPG with regard to passing west of the Euphrates, but there are some indications signaling that Russia will try to violate the border. But let's not deceive ourselves. The YPG is currently protecting the U.S. land force positions in Syria. Only three days ago, Brett McGurk, the U.S. special presidential envoy for the Global Coalition to Counter ISIS (DAESH), paid a visit to Kobane along with British and French authorities in order to make up with the PYD, which could not attend the Geneva meetings because of pressure from Ankara. The YPG militants gave a plate to McGurk to convey their thanks during his visit. However, only a few days ago, the YPG issued a call to attack Turkey.

Under these circumstances it is hard to answer the question in the title. However, the promise, that founding a PKK-linked state to Turkey's south will not be allowed at any cost and the opposition will not be left alone, is still valid.

When looking at the situation through this lens, one can see that the question of whether Turkey will intervene in Syria is not a yes or no question, but a question of when.