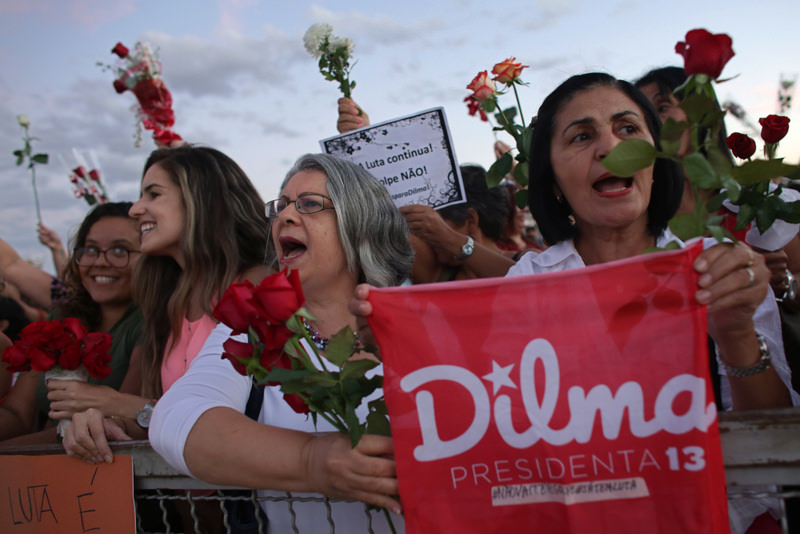 Women carrying flowers take part in ,Flowers for democracy, demonstration against the impeachment process of Brazilian President Dilma Rousseff, in Brasilia.
by Hilal Kaplan Apr 22, 2016 12:00 am

Dilma Rousseff's government in Brazil and the AK Party in Turkey are both paying the price of their reforms without first receiving U.S. approval that enables the poor to have the same rights as society elites

Brazilian President Dilma Rousseff was elected with 56 percent and 52 percent of the vote in the 2010 and 2014 elections, respectively. These election victories, which were achieved by receiving 3.5 million more votes than other political parties, upset opposition parties as well as capital and bureaucratic circles that constituted one of the gears of Brazil's oligarchic system. This was because Rousseff's re-election strengthened the possibility that Lula da Silva, who was president of Brazil for two consecutive terms between 2003 and 2014, might be elected president once again in 2018. It was thought that if the Workers' Party could not be prevented from assuming power, it would lead the country for at least the eight years ahead, which would permanently undermine the oligarchic structure in capital and bureaucracy.

Da Silva and Rousseff accomplished many significant things in Brazil. They carried out reforms that enabled 23 million families to escape poverty. The economy grew, social justice began growing stronger and the poor and black people who were ostracized from the center began moving toward the center. Airports, shopping malls and private hospitals were no longer sheltered places that belonged to only white people.

Brazil badly overstepped the mark in two areas. Along with Turkey, it attempted to integrate Iran into the international system without receiving the U.S.'s approval. Just like the Justice and Development Party (AK Party) government, it pressed the financial system to reduce interest rates in order to boost investments and production. The bourgeoisie, which clamored that the state intervened in markets, took action and were supported by extreme leftists in their attempts. While Turkey was struggling with the Gezi Park uprisings in June 2013, the British left and the "fellow bourgeoisie" started a rebellion on the pretext that bus fares were raised. Brazil's street protests continued at intervals in 2015 and 2016. Before this stream of incidents started, Rousseff did another thing for which she would regret later. She strengthened the Federal Prosecutor's Office and made it autonomous, thinking that it would help fight the oligarchic bureaucracy. The office became the primary power that was not subject to any audit apart from the legislative, executive and judicial branches of government. Brazilian federal judge Sergio Moro, who is known for his ties to the opposition party, launched a probe in 2014 that he called "the largest corruption and bribery operation in Brazil's history." The institution that Turkey's Dec. 17 and Dec. 25 operations were aimed at was state lender Halkbank, which started to become an attraction center for Iran, India and the Arab world, and the probe in Brazil was aimed at state-run Petrobras, which is one of the largest oil companies in the world.

The media presented Moro to the people as "a hero who can do no wrong." He leaked tape recordings between former President da Silva and current President Rousseff to the press in violation of laws. After all, the mainstream media, 70 percent of which was owned by capital-holding families, presented politicians as corrupt and judges as straight arrows there to save the people. The collapse of the Brazilian economy gained speed amid this tumult. Let us remember Shell CEO Ben van Beurden's February remark: "Petrobras should step aside and cede some of its drilling rights to foreign firms."

The Brazilian judiciary has subverted and captured politics as deputies who are impeached for corruption constitute 60 percent of the assembly. The strangest part of the matter is that there is not a single concrete allegation of corruption against Rousseff although the assembly, where 60 percent of deputies are suspects, voted for her impeachment. The most hotly debated issue about Rousseff is a sin of omission and the opposition party's claim that she deliberately announced the budget deficit as lower than it was before the elections. Even if these accusations are true, they are not included in the category of "crimes of responsibility" that are constitutional requirements to impeach a president.

Corruption is a perfect pretext to overthrow legitimate governments and paralyze politics. At the moment, Moro is more powerful than not only the president and other politicians, but also the supreme court's justices. Concurrently with Brazil, Turkey experienced coup attempts when Gülenist police officers and prosecutors concocted a similar corruption scandal in 2014. Here, the following remark by Alfredo Saad-Filho, a political economy professor at the School of Oriental and African Studies (SOAS) at London University, becomes more of an issue: "Under neoliberalism, coups d'etat must follow legal niceties, as was shown in Honduras in 2009, and in Paraguay in 2012."

If Rousseff loses the vote that will be held in May, Brazil will be the third country to be intimidated by "white-glove coups." So, resist, Dilma, resist, Brazil!

Hilal Kaplan is a journalist and columnist. Kaplan is also board member of TRT, the national public broadcaster of Turkey.
Last Update: Apr 22, 2016 2:13 am
RELATED TOPICS