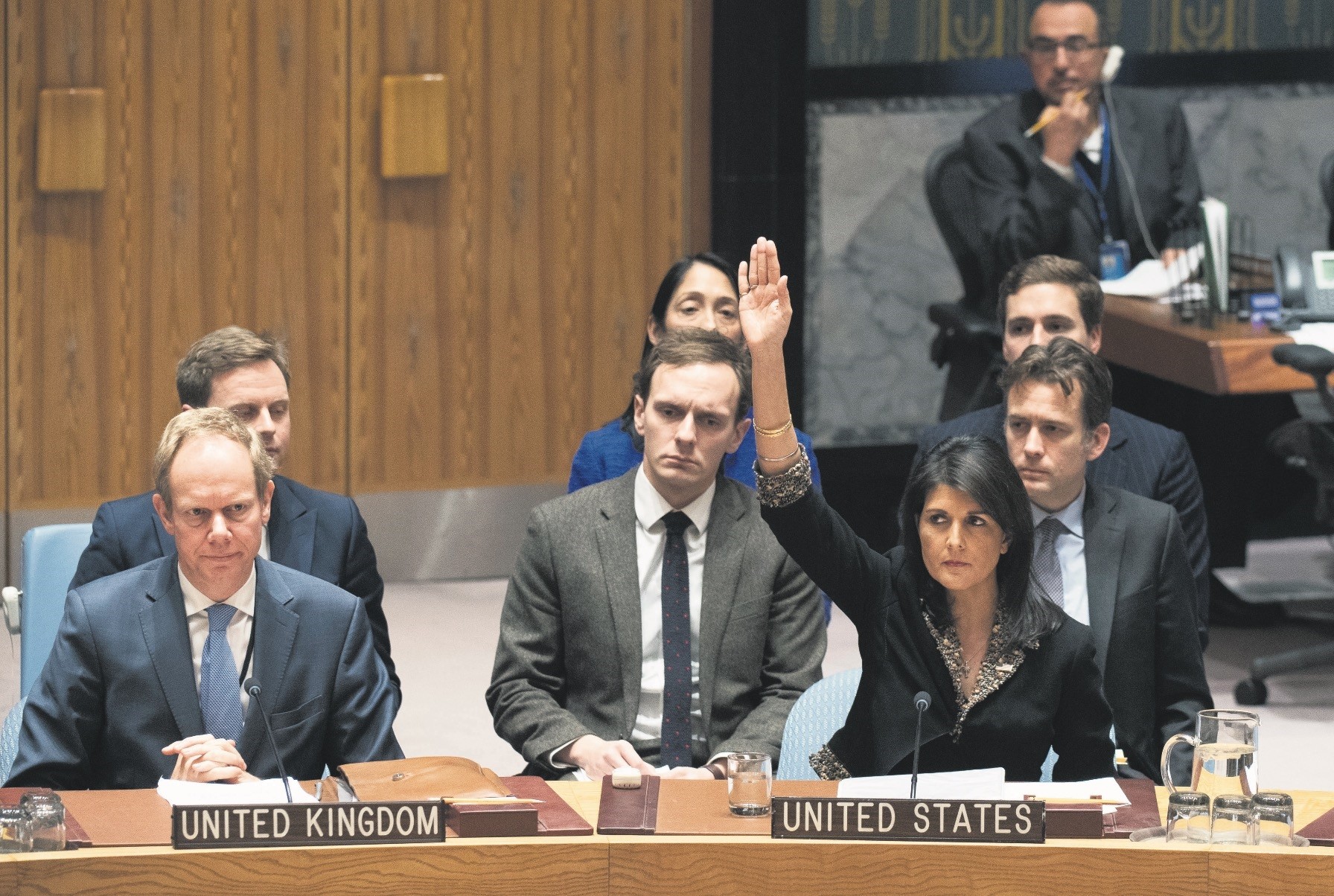 U.S. ambassador to the United Nations Nikki Haley (R) raises her hand as she votes against a resolution concerning Jerusalem's status at U.N. headquarters, New York City, Dec. 18.
by Hilal Kaplan Dec 22, 2017 12:00 am

U.N. Ambassador Haley's declaration that she will note the U.N. member countries that stand against the U.S.'s decision is simply a shame

Every country, including centuries-long allies of the U.S., those looked down on as third world countries, those subjugated by U.S. hegemony in the post-World War II order and those still in need of aid from the U.S., have converged to stand against the decision. The country that brought the vote to the U.N. agenda was Egypt, which Trump assumes is a reliable ally in the Middle East and which is receives the second-most military aid from the U.S.

Therefore, the entire world delightedly watched when U.S. ambassador to the U.N. Nikki Haley was the only one raising a hand with an irritated expression on her face. Although the decision could not be rescinded due to the U.S.'s veto power, the dissolution of "the empire" has echoed all the way from New York to the rest of the world. A multipolar world order has been heralded in the corridors of the UNSC, indicating that hard times are awaiting the U.S., which has been accustomed to intervening in the world order as it wishes after the collapse of the Soviet Union.

The final communiqué of the Organisation of Islamic Cooperation (OIC) summit held last week on a call from President Recep Tayyip Erdoğan, said: "OIC members agreed to affirm its readiness to take up this grave violation in the U.N. General Assembly should the U.N. Security Council fail to act in accordance with U.N. General Assembly Resolution 377A; the Uniting for Peace Resolution."

Yesterday's vote was an outcome of this determination. With the result of this vote, I know for sure that the U.S. will go through the greatest isolation in its history. According to an email sent by Haley to U.N. diplomats, which has been published in Foreign Policy, she went as far as to threaten the representatives of other countries. It was revealed that Haley would note all the countries that take a stance against the U.S. and convey them to the president, who sees the issue as personal. The list will be quite long, so I suggest she note those that vote with the U.S. instead.

Hilal Kaplan is a journalist and columnist. Kaplan is also board member of TRT, the national public broadcaster of Turkey.
Last Update: Dec 22, 2017 1:26 am
RELATED TOPICS